The team attended the opening ceremony in Sotkamo where the WOC song was performed live. The World Championships were officially opened and after the ceremony had been completed the Sprint Final began. The womens race was won by Simone Niggli, and in the Men’s race Marten Bostrom from Finland won. This got the home crowd excited, a good start to the competition for Finland as Venla Niemi also won a bronze medal in the Women’s sprint. To make the town of Sotkamo more interesting for sprint orienteering, the organisers built a number of uncrossable fences. The Sprint Final results can be found here.

Nicolas Simonin achieved an excellent 33rd place in this race. His time of 1.57.13 was 15.34 behind Thierry Gueorgiou (France) who ran the 19.8km course in 1.41.39. Will be interesting to see if the organisers comment on this winning time as it was 10 minutes slower than the estimated winning time. Finland again medalled in this race, with Jani Lakinen 2nd, and Edgar Bertuks of Latvia was 3rd. The Women’s race was again won by Simone Niggli (Switzerland), with a gap of 2.59 to 2nd place, Tove Alexandersson (Sweden) and Lena Eliasson (Sweden) 3rd. Local favourite Minna Kauppi was 4th having lost 2 minutes on one control. Full results of the Long Final can be found here. 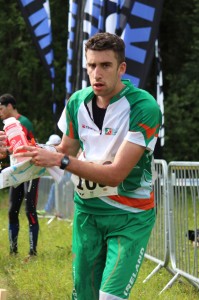 Nick passing through the coaching zone, approximatley half way round the course

Rest of the Week

Today, Wednesday, is a rest day for the WOC athletes, with many choosing to either relax or to train on the model map for the middle qualification race tomorrow. The Middle final will be held on Friday and the competition will end on Saturday with the relays. There is a shift in terrain type with the middle/relay areas being held on hills to the west of Vuokatti, more typical of Nordic terrain than that experienced in the long area of Tipasoja.

GPS tracking of the various races can be found at this link. YLE (Finnish Television Broadcaster) is showing the races live on TV, with it also possible to view the live broadcast on their website, races so far have been shown on YLE2. The WOC website has links on the homepage to the online results services, and other services they are offering for coverage of the races.