Many thanks to Ruairi Short who brings us a little closer to the trials and tribulations of a Irish Senior Squad Selection trip:

The weekend of May 6th saw 7 members of the Irish squad compete in the WOC 2017 selection races in Estonia near Otepää. The Irish competitors were:
Olivia Baxter, Niall McCarthy, Colm Moran, Conor Short, Ruairi Short, Nick Simonin and Jens Waechter.

Conor and Colm arrived in Otepää first, managing to fit in two training sessions on Wednesday, during one of which they were snowed upon! They also visited the second highest point in Estonia at a whopping 318 m.
Ruairi arrived late on Wednesday after the Finnish team, who were giving him a lift, had their car rental cancelled!
Training was a mixed affair on Thursday, with Conor and Ruairi checking out the still-snowy-in-places forest and Colm the roads during the morning. Olivia arrived in the afternoon and she and Ruairi headed out to the SI training event.
Assessments of the forest mostly complete, our objective would be ‘go straight’ as even green is not that bad. As is the tradition of squad orienteering trips, the evening was completed with a few rounds of cards before heading to bed.

Friday morning was restful for most with the sprint in the evening. Conor did avail of a nearby map and Ruairi took an easy jog to explore the town of Otepää which is known as the winter capital of Estonia; as the sun began to shine. Colm then collected our penultimate member Niall on the Latvian border before the team (still minus one) headed to the sprint.

The sprint was a relatively easy course, with some route choices later on.
Nick was best of the Irish securing the coveted WOC spot. Colm was 2nd and Niall third, so with one selection race left all is still to play for. Olivia was the only Irish woman so she also secured her place in the sprint team. Results: Sprint Men , Sprint Women .

The final member of the team, Jens was delayed, after a late initial flight, he missed his connection and had to re-book. Jens finally arrived just in time for dinner followed by some more cards, though the game of choice had to be changed due to fluctuations in player numbers.

The squad had a late start on Saturday, though Jens and Colm took an easy morning jog. We had some adventures getting to the event as the organisers provided no instructions and the chosen road had 15 km of road works which meant only a dirt and gravel surface.

When we did arrive there was some more stress over the distance to the start, the organisers didn’t know; luckily one of the British team ran there and back and filled us in. The bib collection didn’t go perfectly either as Nick hadn’t paid and had forgotten cash so we had to pool resources to pay for his entry before everyone got into race mode.

There were mixed emotions after the race. In order of results: Nick was ok. Colm’s ankle held up. Conor felt sick. Niall felt good but made mistakes. Ruairi was clean but slow. Jens also had some mistakes but felt good physically. Olivia just about survived the terrain but was fairly happy with the navigation.
All agreed it was a physical forest. Fast running, with lots of small climbs and short stretches of green. We waited for our maps before taking a more sedate route home. Results: Middle Men, Middle Women.

Thankfully the hotel had a late lunch for us after the race and everyone was glad to get some fuel on board before the long day tomorrow. No one had success in getting a massage from the French team masseuse but Jens organised a sauna in the hotel which was perhaps as good before heading for dinner! Some of us then went to the pub for, along with discussion and speculation of what the results mean for the WOC team, before an early night.

The long start list had been hopping and changing all weekend as various people needed to leave for flights. Olivia departed herself at 5am from the hotel! In the end we had starts around 1030 which meant an earlier start today. Having learnt from yesterday we took a safer route to the event. It was still not without incident as Nick tried to drive into the assembly instead of the parking!

For the competition it was a long day with 16.5 km on the menu, not including the 460 m to the map from the start! We started at the top of a ski slope on one side of Estonia’s deepest valley, there was a good view of the runners on the course running up the opposite side so we knew what was in store. In the end only Conor and Ruairi finished. Jens had to catch his flight, Nick had a small knee injury and Niall hadn’t been expecting to run, only hoping I’m instead of Colm at the last minute due to Colm’s achilles issue. The loan of a single energy gel from Conor was perhaps not enough. Results: Mens Long.

The squad members went their separate ways to await the official announcement of the forest WOC team. 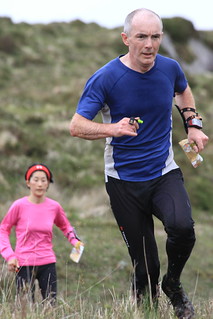