The Irish Senior Orienteering Squad has entered into a three-year contract with Trimtex to supply them with new orienteering gear in advance of August’s World Orienteering Championships in Hungary.

After some discussion among team members at the last World Orienteering Championships, it was decided to obtain new O-gear. A primary goal was to ensure that each team member would have a set of top-quality gear. Brendan O’Brien, Director of High Performance at the Irish Orienteering Association, was contacted about the plan, and gave the go-ahead.
During the Swedish O-Ringen 2008 (the week following WOC in the Czech Republic) many O-gear suppliers had stalls promoting their collections. After speaking to some of the suppliers, Trimtex was chosen. Pär Olofsson, at Trimtex Sweden, became our contact-man. After many initial ideas and trial runs, Pär Olofsson and squad members Andrew Quin and Neil Dobbs came up with the final design for the squad gear. The idea behind the final design was to have a competition top that would be instantantly recognisable as the Irish top, and yet not be too blatant. The designers hope that they’ve achieved that!

The new squad gear includes the O-top, O-pants, a trainer jacket and trainer pants for warm-ups/cool-downs, and a singlet top for sprint races.
Trimtex can produces top quality gear for clubs, and can print complex designs that can be developed to the clubs’ wishes. They currently supply several Irish clubs, including Cork O, 3ROC, GEN and CNOC, with their O-suits. Laser-printing ensures that the O-top doesn’t lose its print-pattern, despite rough treatment. For a more complete picture of Trimtex’s collection visit their website here. 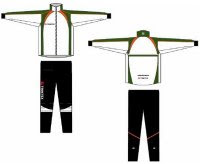 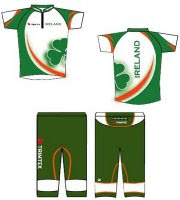