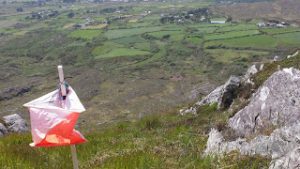 The terrain was typical of the area: marsh, rock, contours,bog and tussocks, with scarcely a tree to be seen: this is what we come to the Shamrock for. What we don’t expect in June is the kind of weather we used to get with the early Shamrocks when the event was run in March!

Day 1 at Cobduff, near Glengarriff, was misty and drizzly in the car park but at the exposed start it was windy, wet and bleak. The middle-distance race, run on the Saturday afternoon, started near the hilltop and brought runners straight into the testing terrain of wiggly contours. Around the hill in a clockwise direction, into an area of steep spurs and gullies and 10 metre visibility in the mist: risky to go too high or too low, but where is the control? All the features look the same. Search. Give up. Relocate and find the control. Keep going. I felt the area was rather under-mapped, with boulders and crags which could have been on the mamp just not shown, but it was the same for everyone. Eventually drop out of the clouds to see Bantry Bay and Whiddy Island below us. Just the bogs to negotiate now, around the hill and down to the finish. Lucky to catch the minibus back to the car park and use the GAA club’s changing rooms, a midge-free zone. Marcus Pinker, Ruairi Short and Colm Moran took the top spots in M21E with Alison Campbell, Toni O’Donovan and Ruth Lynam 1, 2, 3 in W21E. Another Shamrock has started. What will tomorrow bring? The forecast is better, so maybe …

Day 2 at Shrone Hill and Glengarriff Forest, with sunshine. What to wear? Exposed mountainside, with heavy showers forecast. A lovely walk to the start, through the forest to Lady Bantry’s View, with spectacular vistas over the mountain, forest and Bantry Bay. Sunny and warm – perfect. Take the map and start running. But wtah’s this? The map shows lots of parallel ridges and crags, the terrain we associate with Glengarriff, but it doesn’t show the big tussocks of grass which make you fell over every few steps. This is going to be a slow one. Keep in contact with the map, otherwise you’re in big trouble. Up and down across the ridges, down to a relatively flat area in the SE corner where I lost contact but recovered, up the hill and around into the forest towards the end where I couldn’t make any sense of the map. On down to the finish. Then the rain came and within hours the car park was under water. Marcus Pinker again led the field, with Conor Short and Darren Burke following, while Toni O’Donovan was well clear of Sirra Toivonen and Katie Reynolds, and Ruth failed to finish.

The shorter courses had a start in the forest and an easy run around the tracks, which was probably inevitable as the open mountain was just too difficult. There were a lot of slow times and non-finishers, adding to the substantial list of DNF’s for the weekend.

The 200 or so competitors who came to the Shamrock were a mixture of home and away runners, with about one third from abroad. What do they come for? The reputation of the event for providing challenging orienteering in unusual terrain; the relaxed atmosphere; the social activities. Many of them come back year after year and spread the news about the event in their home countries. This year we had runners from Ireland, the UK, France, Sweden, Finland, Denmark, Lithuania, Norway, Switzerland and Australia.

After rain and mist on Day 1, sunshine on Day 2, what would Day 3 bring? Well, the forecast was the worst of the weekend … and it was right. The original plan was for another event near Glengarriff but it had been moved to Derrycluvane, near Kilcrohane on the Sheep’s Head Peninsula. Parking was in a remote field and the start and finish weren’t too far away, but the winds strengthened and the rain came and the mist descended, and then the wind strengthened some more:

Remember Slieve Croob at the Irish Championships? The Shamrock was similar. It would have been OK except for the wind and rain. Jackets on, hoods up, and off into the gale. A lot of non-finishers on the day: in fact, a lot of non-starters. Once again, searching for controls when your map could blow away at any moment added to the challenge. As usual, Day 3 had a chasing start where the leaders go out first, followed by 2nd, 3rd etc. Marcus was only one second faster than Conor on the day, but his cushion from the first two days left him well in the clear even though Ruairi Short managed to overtake his younger brother to finish 2nd. A good run from W20 Niamh Corbett brought her in 2nd on the day to Toni and to 4th place overall.

A wise move by the organisers to move the prizegiving from the assembly field to the steamy warmth of Arundel’s pub in Ahakista allowed the unique ceramic prizes featuring sheep in various forms to be given out while the host club again took to the mountains to recover the controls.

A huge effort by a modest sized club in very difficult conditions again deserved a big “Well done and thank you” from the orienteering community. Next year there is talk of a Three Day event in Leinster on the June Bank Holiday weekend (4-5-6 June 2016), so watch out for that.

For a short video capturing some of the conditions, filmed by Jamie Latimer, see here

There’s always something new! I thought I had exhausted the possibilities of stupidity in orienteering but I found a new one on the first day of the Shamrock. Apart from the rain, mist and wind, I had major difficulty reading my map with my “Vapro” O-glasses. Usually these work quite well, they don’t fog up too much and I can read the map with the little magnifying area in the lens. One feature of these glasses is that the lenses clip out and can be replaced with different magnifications, or with tinted lenses if it’s sunny. At the start I put my glasses on and I couldn’t read the map at all, so I just put them away. After I finished I investigated and found that I had put the lenses in the wrong way around (left lens for right eye etc) so the magnifying lens was somewhere between my eye and my ear, not where I needed it all. Maybe it would work for a lobster to read a map! Another lesson learned.

Finally, I have to mention this as it’s the only one this year so far, but there was an unfortunate  cuckoo out in the terrain on the first day and, since he wasn’t at the Irish Championships (which is usually a good place to hear him) I’ll have to give him credit for appearing at the Shamrock. Maybe he was blown off course, or maybe I was …

In case it goes unrecorded, here are the people representing Ireland at the big international competitions this year: 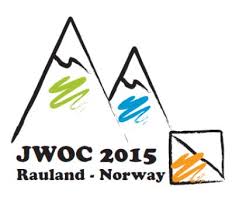 Mixed results for the Irish team of three boys and four girls at this year’s JWOC at Rauland in Norway. The Championships comprised a sprint, middle distance qualifier and final, long and relay. Niamh and Róisín made it to the B final in the middle distance, with Cliona one tantalising place off qualifying. Jonny won the mens C-final but was obviously disappointed not to make the B. The A final is still probably some way off for the Irish. 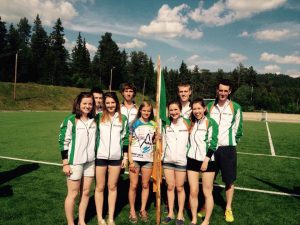 You can see the maps, results etc here. 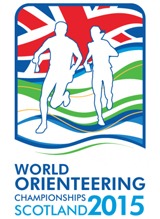 See all the WOC details here.

It is notable that all of the nominees with the exception of Nick Simonin and Ciara Largey, are second-generation orienteers, in other words their parents are orienteers too and they have probabl;y been orienteering since they could walk. In fact Conor Short is a 3rd generation orienteer as his grandfather, Joss Lynam, was one of the founding fathers of Irish orienteering back in the 60’s. The Family Sport!

This is Scotland’s third time to host WOC, each time based more or less in the Inverness area. The 1976 event used Darnaway for the long race (there was only a long and a relay) and Darnaway will feature again this year, both for the WOC and the Scottish 6-Day running in parallel with it. 1976 was the first time there was an irish team at the World Championships and it’s great to see most of that team still orienteering: Wilbert Hollinger, Monica Nowlan, Pat Healy, Eileen Loughman, Paget McCormack and Wally Young.

Tech note: TIO has recently moved over to the main IOA site so that these articles should appear quickly and in their intended format on the IOA web page. However, the software doesn’t seem to allow the same scope for coloured text and other fancy stuff, so for the moment you’ll have to live with a black and white world of orienteering.