Where to start? The terrain? The weather? The range of events? The fact the LVO took it all on themselves? Or that they effectively had to produce seven maps for the event? The first Relay win for Bishopstown? All of the above?

At the Elite end, honours went to Niamh O’Boyle (CNOC) and Nick Simonin (BOC) in the Classic race at Slieve Croob, in weather conditions which were, if anything, worse than last year: cold, wet and stormy, with cloud on the upper slopes. Was it worse than the Leinster Championships at Carnawaddy in 2005? Yes – it was colder. Lots of non-finishers and several cases of mild hypothermia, but the organisers had wisely insisted on weatherproof gear for all runners (does anyone but orienteers refer to them as “cagoules”?). Nick was followed home by Nick Barrable with Eoin McCullough (DUO/3ROC) 3rd, while in a close-fought ladies race Ciara Largey (FermO) finished 56 seconds adrift and Toni O’Donovan (CorkO) a further 52 seconds down on Niamh.

The previous evening, planner Igor Stefko treated us to a run around a fast and fairly tricky small housing estate at Lisburn, with lots of alleyways and hedges. Niamh again showed her versatility, winning the Women’s Elite sprint by 4 seconds from Scotland’s Kirsten Maxwell, while top Irish runner in the Men’s race was 2nd placed Darren Burke (CorkO) bracketed by sprint specialists Murray Strain (Scotland) and Nick Barrable (England). The sprint event and Monday’s Sprint Relay used “SI Air” electronic timing chips, where you just need to pass close to the control rather than actually punch, which improves the runners’ flow in the race and was a popular feature for the Elites.

Runners were advised to look to the east from the Sprint finish arena to see the distant hill surmounted by radio masts: this was to be our last look at Slieve Croob, since the forecast for the next day was bad and we were unlikely to see it, even though we’d be running on the area!

Sprint orienteering (with winning times in the 12-15 minute range) isn’t to everyone’s taste but you just have to try it – it’s such fun! Lots of controls, lots of route choice and quick decision making. There must be urban areas all over the country which could give the same challenge, but there’s a lot of work involved in producing the maps and the numbers may not be there to make such an event financially viable.

After the rain and wind of Slieve Croob, the relays in the sheltered environs of Hillsborough Castle were a welcome relief. Initially the organisers opted for a novel and safe arrangement where all first leg runners would go in a mass start, then all second leg, then all third legs, with some mathematical reconstruction at the end to add the times together and find the winners – this was on the basis of expected bad weather. However, the rain stopped, the sun shone, and the event went back to a normal relay format with leg 1 handing over to leg 2 and so on.

The forest, mostly flat with some detailed patches, surrounded a lake and the start, finish and changeover area was in Hillsborough Fort, a great arena with good views of incoming runners from the battlements. Some green patches (i.e. thick vegetation) with drains, early on some legs and late on others, weren’t the favourite part of the courses, and the recent growth of vegetation in the forest reduced visibility significantly in places, so it made things a bit more difficult.

Bishopstown, with a team of Josh O’Sullivan-Hourihan, Niall McCarthy and Nick Simonin, took their first Irish Relay win, with sisters Caoimhe and Niamh O’Boyle running with Regina Kelly taking the Women’s Trophy for CNOC: quite a weekend for Niamh!

Back to Lisburn for Monday, with IOC officially over but plenty of orienteering still to be done. The venue was Lagan Island, where the runners for the Sprint Relay were marched down from the quarantine boxing club (President – Barry McGuigan) with a kilt and a skirl of the pipes – probably not endearing themselves to the local residents expecting a quiet lie-in on a Bank Holiday morning!

The Sprint Relay format, seen in torrential rain at Trento in Italy at last year’s World Championships, has man-woman-woman-man running in that order. Ten teams took part, fewer than had been hoped for, but featuring runners from Ireland, Scotland, Finland, Sweden. The arena was right beside the Lagan Canal, but there the similarity to WOC 2014 sprint in Venice ended. Lisburn turned out to be surprisingly hilly, with some nice route choices and tricky map reading.

James Millar (LVO) at the Sprint

The event was won by the Ireland 2 team of Susan Lambe, Eoin McCullough, Marcus Pinker and Olivia Baxter, after the sensational disqualification of the Ireland 1 team following Darren Burke’s mispunch on leg 2, denying Niamh O’Boyle a first place in each of her four races. The relay was followed by the City Race, with the M21 course being won by Murray Strain, followed by Shane Lynch and Hugh Cashell, with Kirsten Maxwell, Sarah Jane Barrable and Olivia Baxter the top three women.

While all this was going on, Alan Gartside was working away quietly on the Aberdelghy Golf course, running the Irish Trail Orienteering Championships. First place went to visitor John Kewley with top Irish finisher LVO’s Lyle Fleming retaining his title from last year.

The IOA again arranged for John Sheils to photograph the Championships and his “Action Photography” photos can be seen here.

The Way that We Climbed is a new book by Paddy O’Leary, one of the founding fathers of Irish orienteering. Paddy was Director of Tiglin in Co. Wicklow, which at the time was the National Adventure Centre, an institution which sadly no longer exists. Before that, however, he was a keen mountaineer and rock climber, activities which he continued during and after his years in Tiglin. His book charts the history of Irish mountaineering from the 1870’s to the present and the index is a “who’s who” of the Irish outdoors. Many familiar orienteering names appear – Lynam, Rothery, Lunt, Finlay, Rice, Convery, Kellett, Long, and even some current names like Philip Brennan and Joan Flanagan. Did you know that one time IOA Secretary Pat Redmond had a history as a mountaineer before that?

Rather like orienteering, Irish mountaineering lacks the challenging terrain of some other countries where mountaineers need to go to broaden their experience and test themselves, but the challenge and the enjoyment that those who opt for the home-grown sport has to be acknowledged.

It’s fascinating to see the careers many of these had before coming to orienteering. and a great work of persistence and scholarship. Probably not a book to read from vover to cover but to dip into, the index at the back is a good place to work from.

Anyone interested in the history of the outdoors in Ireland will enjoy it. The book runs to more than 300 pages and is well illustrated from the photographic collections of many of the featured climbers.

“The Way that We Climbed” is published by The Collins Press at €15.99 – those of us at the launch were lucky to snap it up at the special price of €20!

O-Bits … What have we to look forward to this summer? Obviously the Shamrock O-Ringen, now in its 19th staging, in Glengarriff on the June Bank Holiday weekend. Entries are at the 200 mark, with the usual large proportion of visitors from abroad and comparatively small number of Irish orienteers. See  here for details.

The LVO “Tollymore Festival of Orienteering” is on June 19-21, starting with an urban sprint in Newcastle followed by two events in the Mournes, with camping and a barbecue at Tollymore – a great weekend, if previous years are anything to go by. See here for details.

We also have the 18th Setanta Rogaine, overnight mountain marathon, in Wicklow on June 27/27 (see here)

Local midweek evening events continue in the Belfast area, in Dublin/Kildare and Cork, with details on the IOA Fixtures page. Some novel events this year include CNOC’s urban race in Naas on June 9th and Fingal’s urban event at Tyrellstown on July 7th.

August of course sees the World Championships combined with the Scottish 6-Day at Inverness (August 2-8) and entries are still open. Expect more than 3000 running, in all age classes from under 10 to over 90, from all over the world – it’s a great opportunity to see top class orienteers in action and get some of the action yourself. See here for details.

Later in the year we’ll have the Northern Ireland Championships and Junior Home Internationals at the end of October at Magilligan sand dunes, Co. Derry, on 24th/25th October.

What did we miss? The Irish Championships isn’t the only championship we had this spring: Leinster Championships on April 19th promised to bring us back to the Lough Firrib area of Co. Wicklow, scene of last year’s Irish Championships which were characterised by rain, mist and low visibility. However, most courses were run on a mixture of tricky forest with lots of clearings and boulders, very like part of Kanturk Mountsin, with only the longest courses venturing up onto the peat hags and contours around Lough Firrib itself.

Organisers Setanta also ran the shortest courses on a small section of map, Oakwood, where the Juniors ran last year.

Once again, a difficult area top plan on, resulting in some bit leaps in distance from one course to the next. The mid-length courses had a “Grand Old Duke of York” feel to them, where the competitors were brought up the rather unremarkable mountainside only to be brought straight back down again. The forest was surprisingly interesting, with few tracks and lots of vegetation changes, and you certainly had to keep your wits about you there.

You can see the results and routes here.

Another so-far unreported event was the Jan Kjellstrom O-Festival in the English Lake District at Easter, with about 3000 runners. Nobody was beating down my door with reports of the event, so here’s a brief summary:

I was there and so were about 130 other Irish orienteers from North and South, a great turnout. The Lake District provides some of the best orienteering in Britain, with craggy, contoured runnable natural forest and open fells, the home of fell-running. This year’s event saw orienteering returning to some areas used for JK many tears ago: Bigland, Ulpha and Greythwaite, with the addition of a sprint race at Lancaster University on Good Friday.

Best Irish performances were ex-NWOC James Logue, winning M45 Long after winning the M40 Long course for the past five years or so, and Zoe Tyner, 2nd W14A, who was presented with her prize by none other than international star Thierry Gueorgiou of France. Ruth Lynam was unable to defend her W60 title due to injury.

The weekend included three WRE (World Ranking Events): the Lancaster University sprint, Ulpha middle-diatance and Bigland classic race. There was a large international contingent, including Danish, Swiss and Czech teams using the event to prepare for the August World Championships in Scotland. 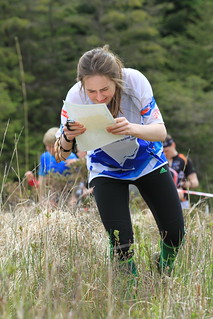