Hi again! Sadly, I’m due to leave Sweden before Christmas so this will be the last piece I share with you about my time in Sweden.  I thought it would be interesting to let you know about 2 pretty special adventures I’ve had while I’ve been here.

First off is my trip ‘up north’. Many of the Irish orienteers will probably know Anton Hallor from his time working as the development officer in Irish Orienteering last year. Well, what you may not know is that he was also my housemate when we were living in Dublin, so we became pretty good friends. He is now living in a town called Älvsbyn in northern Sweden, so I took this opportunity to go and visit him and explore somewhere new!

I left Stockholm on the Thursday night on the overnight sleeper train and 13.5 hours later (yes, it took that long!) I finally arrived in Älvsbyn. The weekend was really great; we did a lot of training including two long orienteering sessions and a long trail run, and we had glorious weather, however my favourite part was where we went on the Saturday – the Arctic Circle!

The Arctic Circle is about a 90-minute drive from Älvsbyn so it was a “must-visit” of the trip. We made the journey in the morning with the aim to do a long trail run in a nature reserve while we were up there, however when we arrived at the nature reserve there was too much snow and ice, meaning my running more resembled Bambi! However, after driving a bit further to somewhere with a bit less snow, we managed to do our trail run in the few hours of sunlight there is that far north and visit the Arctic Circle! I also had a reindeer pizza!! It was such a great opportunity so I couldn’t not do it while I had the chance.  It was a great weekend.

My second awesome adventure was competing in the Stockholm Rogaining event. This is a score orienteering race with a 6-hour time limit, and this year it took place in an area called Paradiset which translates to “paradise” in English. This is very appropriate because the area is an awesome area for orienteering. The rules of the race are that you have to complete it as a team and stay within hearing distance of your teammate at all times. My teammate was good friend, training partner, and IFK Göteborg club member Erica Pettersson. We ended up running in the terrain for 5hr30 and we had a great time. There was a large penalty for not making it back to the finish within 6 hours, therefore we decided to be safe and sacrifice a few more controls to ensure we made it back within the time limit. It was a really fun race and it really showed me that I was more capable than I thought at running for such a long time. It also snowed heavily for the first 30 minutes meaning the terrain had a nice white covering for the rest of the race.

Due to the COVID guidelines the rogaining this year was a virtual event meaning you could complete it anytime between the middle of November and the New Year, therefore we will have to wait a while to see the results, however I am proud of how Erica and I ran.

Overall, I’ve had an awesome time living in Sweden these last four months but unfortunately it is time for me to come home in a couple of weeks. I will be spending the holidays at home in Scotland before going back to university in Dublin next semester. I will thoroughly miss living with this awesome family and training with the many great friends I have made here, so I hope I can come back again soon!

If you’ve enjoyed hearing about what I have been doing, and think it could be something you would enjoy too, the family are looking for someone to replace me when I go back to university next semester. Find the job advert link here (I really recommend it!):

There‘s still time to race in the Stockholm (virtual) Rogaine, the event runs until 31st December, so if you’re planning a trip, or are already in the area then here is the link! 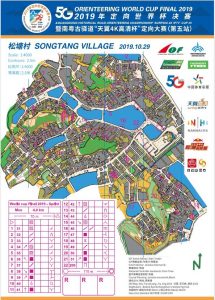