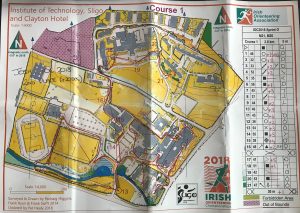 Congratulations to all the newly crowned Irish champions.
A huge thanks to John McCullough and his team for the effort in putting this event on for us.
It was really great to see the event so well supported.
Thanks to everyone who competed.
Also a big thanks to the IOA committee members who attended the post event meeting.
These officers do huge work on our behalf.

The date has now been confirmed for the Irish Orienteering Championship Sprint for 2017 as Saturday December 2nd. It will be held on the campus of Dublin City University/Albert College Park, Glasnevin, Dublin 9. Further details will be published on the organising club, 3Roc website as they are made available. This area (DCU/Albert College Park/Hampstead Park) is now out of bounds to orienteers.

The orienteering students in DCU will also be involved and they hope to re-establish the O-club in the college.

Entries are now open on Fabian. The deadline for entries is Sunday November 26th.

For those travelling and wishing to extend their orienteering to make a weekend, there are two events on Sunday following the sprint, a family event in Ballyannon Wood, Co.Cork and Leinster League on a new map in Dunmore Wood, Durrow Co.Laois. Hostel accomodation (very rural) can be found nearby in Ballacolla.