Another Take on Fitness

Jean O’Neill is an orienteerer I have admired for many years. She is always willing to chat and compare maps, and is someone who admits herself, came late to orienteering. However she came with a strong athletics background, and as such I asked her to write up a few notes on what she does in training.

Jean competed internationally for Ireland over 400m and 800m in the early 1970’s (as did her sister, Claire Walsh, who competed in the Munich Olympics in 1972 and more).

Her thoughts re training are based on what she does (when reasonably fit and not injured) to train for orienteering. (compared to what Jean used to do to train for 400 or 800 metres on the track). 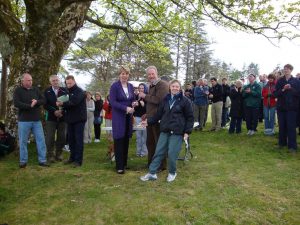 At first, starting from scratch, (or after a long lay-off)  do runs every second day, starting with 15 or 20 mins building up to 40 minutes after a couple of weeks. When comfortable with that, then  do the following, based on three training days a week plus Sunday orienteering:

2–Repetition hills. The River Valley up the road from Jean has a steep hill that she runs up, jog down-or walk a little if necessary). Build the number of reps up, starting with 4, to 10. The distance is about 150m. Jean has her countdown watch set for 2 minutes, going up usually took about 40 secs, jog down recovery, and ready to go again on the next beep.

3. Fartlek. This is alternate jogging and striding (faster but not flat out). 1 minute of each, no stopping. Build up the number of reps. Maybe 6 to 8 reps of fast/slow. When quite fit the time could be extended to 1 1/2, then 2 minutes of each. Its important not to stop at all. (at first even reps of 30secs would do). (again countdown watch is good for this, go or stop on the beeps)

Jean does all her training on grass. If there is suitable terrain the long runs could be done on forest tracks.

If anyone has any questions that they might like to ask Jean let me know and I will put you in contact, she would be delighted to help.