The Great Southern plain of Hungary played host to the 2018 Junior World Orienteering Championships. The word great is no overstatement, as the fields and forests that surrounded the event centre of Kecskemét, Hungary seemed to go on forever as we sat on the long bus rides to quarantine. Team Ireland, consisting of three boys, namely Conall Whelan, Zac O’Sullivan Hourihan, and myself, with three girls, Clodagh Moran, Eadaoin McCavana and Emer Perkins was well led by the experienced head that is Paul O’Sullivan Hourihan.
To be straight and almost brutally to the point, JWOC this year was extremely tough. Strange terrain, melting heat and serious competition left their mark on the team. To give an example, this year’s long distance race, the first of the week, was the longest ever at JWOC, with the M20 course planned at 15k long. I ended up running 17.54k, almost 10k longer than the IOC long distance. I was happy enough with what would turn out to be my best run at JWOC, 69th, 20 minutes down at 89.4 minutes, with the added bonus being a good start in general for the team, apart from poor Clodagh’s ankle which would prove difficult all week.
The most unique feature of JWOC this year was almost certainly the middle distance terrain. The name Bocsà will haunt most participants forever, as the maps that bore the name are just a solid mass of green. The so called juniper labyrinth was the main feature. Imagine the bushes of the Curragh, except taller. Now cover an entire map in just the bushes and you have an idea of the terrain. All orienteering techniques or experience seem to mean nothing, the best approach seeming to be grit and bare. 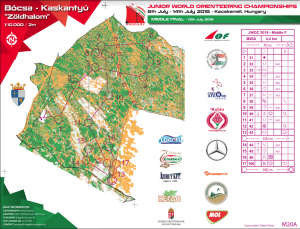 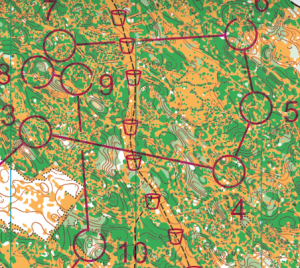 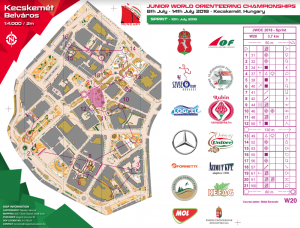 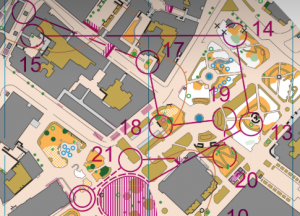 As I have moved from events like the Junior Home International up to JWOC, it becomes clear that the talent is truly spectacular. The Norwegian trio that won the men’s relay are simply incredible athletes, pushing sub 4 minutes per kilometer. The rumors of Kasper Fosser’s training regime that circulated in whispers can do nothing but motivate us to keep up.
It is for that reason that the continuing support we junior and senior high performance athletes receive from the Orienteering community in Ireland is so important. Without the work of men like Paul, giving up their own time and money for us, I feel the aim of keeping up with Kasper would be lost. Again, I must thank him and everyone reading this for helping us in this most elusive of sports.
Finally, on a personal note, I leave this JWOC somewhat shaken, but ready for the next season with lessons learned and improvements noted. Hopefully the more familiar terrain of Denmark for JWOC 2019 will help. Oh, and of course the party keeps us going too!
Ruairi Long

Ruairi Long and his Rogaine partner- Conall Whelan, both 19 years old, embarked upon their first Rogaine a few weeks ago. Their fellow competitors described the newbie duo as ‘so excited, enthusiastic and innocent’ as the race began. Their enthusiasm somewhat dampened as the 24 hours progressed and the rain began, the experience being described as Type 2 Fun!

Here Ruairi gives us a taste of his experience.

With recent talk of ultras, adventures and endurance becoming more mainstream, one could be brought into a false sense of security. What really constitutes tough? -You may ask, when sitting on your couch, watching the Barkley Marathons. It seems that anyone, with the right fuel, could trudge away for a day or two, eventually ending it with smiles and a tired beer. However, 21 hours into the 2018 Rogaine, the last thing on my mind was beer. My body had simply flopped, with a numb sick feeling of exhaustion all over.

The Rogaine is a 24 hour navigation based mountain race, wherein competitors are given grid coordinates of up to 40 control points and told to come back with as many visited as possible. Tactics differ, from returning to base for a nap and a hot drink, to bivvying under a tree. The best thing we did as first timers was the former.

If there was any way I could describe how it felt, I would say it was like a long, voluntary family hike. Imagine those seemingly forced march hikes you were dragged on circa 15 years old. It feels very similar, albeit motivation is certainly different. Time and distance are measured in numbers that usually seem large and far-gone. Speaking to my partner in terms of hours seems entertaining now, as usually, running wise, we talk in 16 minute 5k pace, 3:30 min kilometers. Everything slows right on down to a grind. The next step. The next false top. The next stone. Keep it going. The hours will tick down. Before you know it, you are in Glendalough at 11pm at night, the roads and paths around the upper lake free of tourists or noise. The stillness will stay with you when the blisters are gone.
I think what became most apparent on finishing (early I may add)  was the importance of experience. It is a struggle, and being prepared for that struggle is no easy task. You need to learn to get the food and water into your body when you can. Digesting food already inside you is not something you think about, forcing the 9th cereal bar into your mouth is a different matter. Remembering basic things like hydration when your mind is hazy is tricky.
Most important of all though? Embrace that innocence you may have as a first timer and just get out there. Give it a shot, take it control by control and just look. Live the experience for all it’s ups and downs. Getting an opportunity to push yourself in the most basic of ways, and to clear your mind and body of useless clutter can help give clarity. Oh, and nothing beats that nights sleep afterwards.
On a more personal note, I have to give my gratitude to the guys who manned the base camp through the night, and went out of their way to ensure that we could survive as best as we could. The food, drinks, advice and positivity they provided was invaluable. They know who they are, it would be nothing without them. Thanks again.
Ruairi Long
The duo’s exploits were also recorded on instagram!
Ireland’s Rogaine is organised by Setanta Orienteers  each June, the exact date is noted on the fixtures list of this website each year, together with details of how to enter. We look forward to seeing more competitors join us in a friendly, technical endurance race, not for the faint hearted! There is also a six hour variation if you’d like a gentler Rogaine.