This year’s Swiss 6 Days were characterised by a lot of changes, be it the weather or the orienteering plans themselves. Our arrival in Muotathal – South of Zug – coincided with the Swiss National Day and from the campsite we were gratified with major fireworks. The mountains created some spectacular sound effects and the lights from the fireworks made a beautiful show. This festival feeling was soon to subside to be replaced with some unfair weather.
One of the characteristics of orienteering in Switzerland is that you are never really encouraged to take your car – quite the contrary. The Swiss did not disappoint again this year with the use of public transport as well as Duros (military vehicles) to take us to all the events., showing that it can be done without the car!!!
Day One was a sprint event in Schwyz, a large town about 10 minutes away from Muotathal. We were brought by bus to the centre of the city as the rain was literally pouring down. We were among the over 3,000 participants to find shelter in a sports hall before we were to start our event, where we could leave our bags in a dry place. Paul and I got around fairly quickly and found ourselves finishing in the first half of our respective age groups. These first results were fairly encouraging.

The next two days were Alpine days with day 2 in Schwialpass. This time we travelled in Duros at a time set for each one of us. The trip was a good 25 minutes long. We then had to walk for another hour to the start. The weather forecast was for heavy rain, and once again the Swiss weather did not disappoint as we never got to see the top of the mountains! The heavy and damp terrain made it quite hard to progress rapidly from one control to the next. Even though we could not see much, we could still hear all the local cows and goats, which are equipped with bells, fairly well. This proved to be a plus, as they were providing a nice melodic company during the event!
Day 3 was to be – in the words of the organisers – a “memorable day”. It certainly was characterised with the sun (oh beautiful, what is this yellow thing in the sky?) which we had not seen for a few days, heat and a very long walk. For this event in the Glattalp, we were first taken by bus to the base camp, and we were then to walk 4.4K, and 700m climb before reaching the start/finish of the event. We had been advised to take our camera as the views from above were indeed spectacular. Obviously having to walk up such a distance is not exactly the best way to be ready for the event, but at least every participant got a good warm up. When we reached the top, some heavy mist appeared suddenly, leaving us with hardly any visibility for the start of the event. Orienteering there was certainly the highlight of the week, with gigantic mountains, lakes (which had got even bigger with the heavy rain), snow, etc… 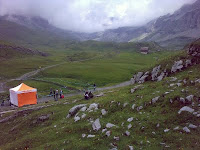 Day 3. Glattalp
We then had a rest day during which the organisers decided to swap the venues for Day 4 and Day 6 because of a landslide which had washed the road away. They could not risk getting all the participants to the event and then have them stranded! So on the Thursday we headed to Chinzig-Seenalp, in the mountains again. The day was glorious and the trip 45 min up the mountains in the Duros was quite chaotic due to the rocky terrain. We were then to walk for 30 min to the start. The sun was shining and we could really appreciate the beauty of the place. It was a typical alpine terrain and once again we were to run among surprised cows! It was a fast terrain still which meant that it was essential to stay with the map at ALL times. The planning of the event was pretty much to get us down, so no real trick there, which made it very inexcusable to make any mistakes, really!!!

Day 5 was a “forest day” in Gibel. The advice there was to wear long legs and sleeves for fear of ticks. The course was short enough and it was essential to plan your route very precisely and accurately as the forest was quite dense in many parts. Gibel was also used for the “Euro Meeting” – these upcoming elite orienteers from Europe were to use the other side of the map of Gibel.
Day 6 finally arrived and more rain was again scheduled, so it was decided that we would get to use Gibel again. Overnight, the organisers had planned courses so that we would all get to finish our 6 days. We even got to use a pen to circle our controls!! It was like being back in the old days. The terrain was quite wet still but again very fast with few paths. So staying close to the map proved very useful.
All in all the week was very memorable, not only because of the places that we got to orienteer into but also because the Swiss organisers did not get defeated by the weather. What is really great about the Swiss O-week is obviously the majestic landscapes. The organisers are proud to take us in the most beautiful parts of the country, even though it means that the participants have to walk up to 2 hours to reach the start.
Furthermore it is really great to be able to orienteer with maps that are so accurate. The smallest boulder would be mapped, thus allowing for improvement in reading the map and navigating more accurately. And finally it is always a bit of a cliché to praise the Swiss precision for logistics regarding the transport, but they certainly managed to get over 3,000 participants from all over the world as far up in the mountains as they could and then they relied on us to carry on by foot without a word of complaint!
Isabelle LEMEE/Paul NOLAN
For results and other details, see here.

For anyone thinking of orienteering in Switzerland, the World Masters O-Championships (for over-35’s: not to be confused with the World Championships) is on in the Jura Mountains in Western Switzerland next August. See here for details. There are open events that anyone can run as well.