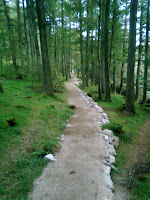 Mountain Meitheal invade Cruagh Wood
Sunday morning, Kevin kneels in Cruagh Wood beating the hell out of an upturned wheelbarrow. “I’ll fix this for you Peter.., ..bet you didn’t know I used to be a panel beater.”
He’s using the sort of hatchet I last saw a Red Indian laying into some unfortunate cowboy with in a movie. The tomahawk slams in again ..I don’t argue.
Despite Kevin’s efforts I watch out for an opportunity to get hold of one of the new barrows he’s prepared.
Any advantage pushing boulders, hard core and grit for a couple of hours is worth taking.

Undeniable is what gets done, an astute picking of projects, organisation, is followed by hands on grafting to produce results that even before they’re finished passers by remark at and appreciate. They’re a crew who do what they talk about doing.

This summer, Cruagh Wood has seen both a boardwalk linking the top track out onto the open mountain and a grit track connecting up Cruagh to Massey’s estate constructed. Both are worth taking a trip out to Cruagh for. One day, no doubt, you will see them appear as features on the next orienteering map from 3ROC.
One day you could do well to join them.. you don’t need an SI card, compass or map, just need to be pointed in more or less the right direction. Get more details here.

Irish Champion Marcus Pinker suffered serious injuries following a bike crash near Sheffield last month. He is recovering but it sounds like it may be a while before he’s back to racing fitness. Marcus won the Irish Middle Distance and Classic distance championships in Donegal in May, and on Day 3 was on the winning CorkO relay team. We wish Marcus a full recovery. Here’s his account of what happened:
It’s about time I caught up on what exactly happened last weekend. I was near the end of a two hour cycle which I had thoroughly enjoyed and was cycling pretty well, I had gone down through Eccy Woods and turned left to take the quieter residential road to join Abbeydale Road. This road is slightly downhill and has speed ramps once you get out of the woods. I guess I was doing 30mph or so and obviously had to focus on the ramps so they didn’t throw me off. I looked up from one of these and saw a car crossing the road right in front of me. The image of the car is a blur and I think that I tried to get me feet unclipped and put them down (I think I got the left down). I reckon that there was approximately 10m between when I saw the saw the car and when I hit it so there wasn’t any time to think about it. I can (again, in a dream like manner) remember heading towards the car but nothing after that. I was told that I was unconscious for about 15 minutes and when I came to the paramedics were around me. I was in pain but too much, but I don’t recall leaving the scene or the journey to the hospital at all and didn’t wake up until I was in A&E.
According to the police there were no cars parked around the junction and no other traffic around. I usually make a habit of looking for cars on side roads as (especially when on a bike) you never know if someone will pull out on you. However in this situation I think that the speed ramps were taking all my focus. The driver said that he looked both ways before pulling out but obviously didn’t see me until it was too late. Unfortunately he was going straight across the junction (I was on the through road) so when he did see me he was side on in the middle of the junction leaving me nowhere to go. I apparently hit the front wing (leaving a big dent) and judging by my injuries, it was with the upper right of my back. I hit the ground next to the car (so did 30mph – 0mph instantly) but my bike carried on over the bonnet (haven’t quite worked how that happened yet). My helmet is cracked throughout with a strip missing around the rim (haven’t worked how that happened either) but my bike appears to have come out unscathed.
Personal damage wise I think that I have been very lucky, my limbs and head have all escaped injury (aside from a bruise on my left side of my head). Sure as my trunk is quite battered it makes all movement difficult but it could so easily have been a lot worse. I think that I have 18 fractures (7 along the side of my spine and the 7 adjoining ribs, my right shoulder, a vertebra and 2 ribs at the front). Time for some R & R!