We’ve just had two magnificent days orienteering on different sand dune areas in Leinster: Ajax’s event on the Bull Island in Dublin and CNOC’s at Kilmore Quay in Wexford. With such a long coastline, we have many sand dune areas which could be tapped for orienteering: areas like Curracloe in Wexford, Tramore in Waterford, Roscarbery in Cork, Inch, Rossbeigh and Banna in Kerry, Mullaghmore in Sligo, Magilligan and Portstewart in Derry are already mapped.
Unfortunately many of these areas are remote from centres of orienteering so they never get the crowds they might (except on a summer Sunday), but what orienteering! Complex contours, varying runnability, sea breezes, sunshine … The shapes of these areas (often long and narrow) would have caused problems in the past, but with electronic timing to ensure that runners visit all the controls in sequence, the areas really open up for orienteering.
Some of these areas are sensitive from an environmental standpoint (did you notice the wild asparagus at Kilmore Quay? -Neither did I) and have severe access restrictions and limited availability. This always struck me as strange – you can have traffic jams and thousands of people at the Bull Island on a sunny Sunday but access for a responsible, controlled and organised group for orienteering is restricted.
But we should enjoy these great areas while we can – restrictions may become tighter in years to come. Don’t be put off by the squiggly contours – they mean so much more when you practice and can visualise the terrain. The Long Strand in Cork, Tramore and Inch have events coming up between now and the end of May, so make the trip to the seaside.
(The photo shows Colm Hill sporting his stylish new CNOC O-top at Kilmore Quay)

Leinster Champs entries close March 23rd
The closing date for the Leinster Championships at Rossmore, outside Monaghan, is today, March 23rd. This area hasn’t been used for years – it was previously used for a Leinster Relay Championships and an Irish Two-Day. The Fingal web site has details and you can enter on line. See here.
Junior Cup Starts
A new competition for Juniors gets underway at the Leinster Championships. The Junior Cup, brainchild of GEN’s David Healy, will award points for the regional and national championships and one day of the ShamrockO-Ringen in classes MW14A up to MW20L. There will be 7 rounds of racing of which the best 4 results will count.

Details of prizes will be announced later.
This reinstates the idea of a National League which used to be run by Frank Cunnane under the FIOA banner for all age classes. The scoring system will be the same as the Leinster League uses. 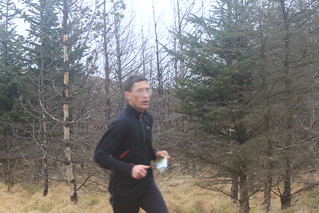