Ruairi Short gives us an insight into his training programme for WOC.

WOC is approaching and I personally am getting very excited. That means various things for various people. This is the first year I’m running more than one discipline, both the Long and the Relay. For me, my training on a daily basis has been focussed mostly on preparing for the long distance. That has meant long runs and long tempo sessions, my most horrific was an uphill tempo session on a treadmill. This consisted of setting the treadmill to 5% and increasing the speed every 3 minutes for 30 minutes. These kind of sessions are also relevant for the relay as that is likely to be a very intense race. On the other extreme, spending evenings with my feet up as much as possible is hugely important!

An example of long training is one I did recently, mixing physical and mental training into one session. Regina kindly planned a long course (which she named roartechoice short for roar route choice) in the nearby forest where I took only path route choices. While I was running that I had another course that I had made on a map right beside the long distance area. I tried to plan 2 of these Estonian legs per one on the course I was running. The result was quite a challenge. Normally I would use the actual long distance area but unusually there are no old maps covering the whole area for this year (Just one really old once covering one corner). It is really useful to look at old maps from the areas to get familiar with making route choices and the lie of the land. At the moment my apartment is gaining about one printed map of somewhere in Estonia per day, but I will need to find a few more before I travel. I think it makes quite a difference to be looking at paper maps rather than those on a computer screen when planning legs or trying to read details as it simulates the real race experience a bit better.
An important aspect of my build up this year was was to travel to Jukola with the club, as a big event in itself, but also a training competition. This was in somewhat relevant terrain, at least with plenty of green, and was excellent racing practice to see what things I need to polish in the last 2 weeks. It was also great fun to be on the second team that managed to come 57th! I learned there that I need to do a bit more work on my route choice selection and compassing in green areas to achieve my goals.
As I am living in Uppsala, Sweden, there is a lot of club activity and trainings going on. Unfortunately, at the moment these are not all hugely relevant to me. There are 5 other guys from the club (OK Linne) going to WOC, although only Albin Ridefelt lives in Uppsala at the moment. Thierry Gueorgiou also lives in Uppsala but runs for a Finnish club, and they have been putting on trainings for the middle distance in which both of them are running. Since I’m not, I’ve been skipping these sessions and have been working on my own for the long distance. At the same time it is great to have the atmosphere and to talk to people that are aiming for medals to understand better how they are preparing.
I’m travelling on Wednesday 28th and meeting up with Conor there in the first instance. That gives us 5 days in Estonia before the Long distance which is our first race. The last few days are quite a balancing act. While one wants to spend as much time as possible in the forest, too much will tire you out so close to the races. The top athletes were out training 2 weeks ago so that they could do many hard sessions in the forest and have time to recover before the competition. I will use the few days off work that I have to best effect and of course will cheer on the sprinters too.
Ruairi’s training log can be found here.
Ruairi Short
Senior Squad member 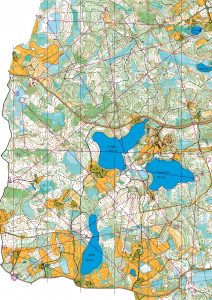