The map is the most important equipment in orienteering and is the basis of the whole sport. Orienteering maps are very detailed, this means that terrain and features are mapped so that what appears on the map are the features that a person running through the area will see. Anything permanent on the ground which might act as a control site or aid navigation will be shown on the map. This will include boulders, natural ground features (pits, knolls, crags etc.), vegetation (thickets, clearings etc.), and man-made features (fences, walls, buildings etc.) Orienteering maps are produced to an internationally agreed specification using standard colours and symbols, which ensures that it is possible to compete in other countries without language barriers.

BROWN
Brown shows us the shape of the land; it tells us about height differences and earth formations. Small hills, knolls, earthbanks are all shown in brown. Contour lines are the continuous brown lines on the map that link areas of equal height – when these lines are tightly packed the land is steep, when they are widely spaced the gradient is slight. The contour interval is the height differences between each contour line. On most maps the contour interval is 5m however complex terrain such as sand dunes are often mapped with a smaller contour interval to include more detail.

YELLOW
Yellow represents open land. This may be fields, clearings, open mountain areas. The darker the yellow, the easier it is to run.

BLUE
Blue means wet! It is used for all water features on the map. Lakes, ponds and rivers are represented by a solid blue. Thicker, continuous lines represent larger streams, whereas thinner, dashed lines represent smaller ditches. Marshes are marked with a series of parallel blue lines. Water features are impassable if they have a solid black outline.

WHITE
White represents runnable forest – this is where you can move easily without being hindered by heavy vegetation, branches or brambles. We love “white forest” for orienteering.

PURPLE
The Orienteering course is drawn onto the map in purple – or magenta to be precise. The start point is marked with a triangle, the control points with circles and the finish with a double circle. The control points must be visited in the correct order. The straight line route between each control is marked with a line, the straight-line route is always the shortest, but not always the fastest or the easiest. The planner will also mark in areas that are out of bounds and mandatory crossing points.

Green represents denser areas of Schools maps will have more detailed scale forest and vegetation. The darker the green, the more difficult it is to move forward. The darkest green is often referred to as “Fight” and is best avoided. Areas with green stripes represent undergrowth and brambles that are difficult to run through.

MAP SCALE
A map is a scaled down drawing of an area. The scale of the map will be defined as a ratio that tells us how the measurement on the map relates to the distances on the ground. For example, on a 1:10,000 scale map, 1cm will be equal to 10,000cm (or 100m) in real life. Orienteering maps come in a few standard scales depending on the type of terrain and event. 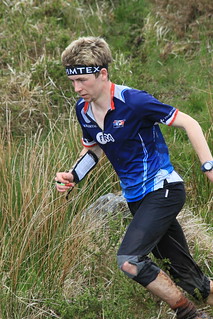