AIMING OFF – To deliberately aim to one side of a control or feature so that you know which way to turn upon hitting the feature before seeing the control.

ATTACK POINT – A distinct feature that is near your control but easier to find.

CATCHING FEATURE – A large feature, usually linear, beyond a destination, which will “catch” or alert us if the destination is passed or overshot.

COLLECTING FEATURE – Natural and man-made features, which we pass on route to a destination and tell us that we are on course.

CONTROL – What you are looking for on your course, a feature marked with an orange and white control flag.

CONTROL CODE – This is a number on your control that confirms it is the one you want.

CONTROL DESCRIPTIONS – These give you information about the features you are looking for. They are often printed on the map or available loose at Registration or at the Start.

CONTROLLER – The official who ensures the standards of the courses are correct.

DOWNLOAD – Don’t forget to do this after the Finish

FOLDING THE MAP – Orienteers fold their maps along the line of travel to aid concentration on the leg being run, and to facilitate thumbing their position.

HANDRAIL – Linear feature which helps guide you along a route. Examples include tracks, roads, streams, fences, walls and vegetation boundaries.

LEG – The journey from one control to the next.

MANUAL PUNCHING – Each competitor carries a control card and uses the pin punch at each control to record their journey around the course. (Each punch has a different pattern of pins!!)

MASS START – For some events eg Relays or Scatter, everyone starts at the same time.

PLANNER – The ‘designer’ of the courses

SAFETY BEARING – A compass bearing or direction which will lead directly to a road or a major trail – used if lost or injured.

TIMING – Each competitor carries an SI-card (electronic punch) which is used to record their visit to each control point on the course. This system has almost completely taken over from manual punches.

START BOX – Orienteering doesn’t have a startline, instead we use start boxes to stagger the start of the race. Runners pick up their map and are let go in set intervals—this helps to prevent following and allows
fair competition.

THUMBING – A technique for holding the map, using your thumb to indicate your present location. To do this properly, it is often necessary to fold the map, preferably along the line of travel. 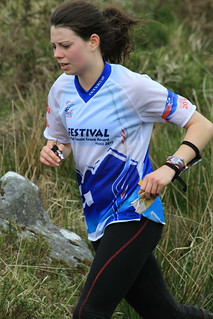