When you use the map, there is one basic element that makes the orienteering as simple as possible: setting the map. You should always hold the map in line with the direction in which you’re running. This means that when you change direction, you should realign the map so it stays orientated with the ground ahead. To do this accurately, it is important to have a compass.

Handrails are the linear features we follow from one point to another. They include paths, walls, fences, streams and earth banks. When you are first starting out the safest way between controls will be to follow the handrails.
As you progress up the courses, the amount of running on paths decreases steadily, a yellow or orange course is mostly along paths while a green or blue course may not follow paths at all. To prepare you to start moving away from paths and tracks, you need to start looking at other line features e.g. walls, fences, streams, edges of forest and vegetation changes.

A catching feature is an obvious feature beyond the control that will let you know that you have gone too far. It means you can run hard towards the control as you know it will “catch” you from going further. Catching features are usually present on easier courses however the planner tries to avoid these being present in more technical courses.

A good attack point should be obvious and fairly close to the control location. You can run fast to your attack point, and then carefully navigate into your control.

SPEED VS ACCURACY
Orienteering is so much more than fast running. When you run fast you might cover the ground a few seconds quicker, but poor navigation can lose several minutes or more.

DECISION POINTS
Decision points are places at which a choice must be made. At the introductory level this will probably be a path junction, where the decision is left, right or straight on. Sometimes there is only one sensible way to go, but other times there are several possibilities. It’s no good flying past the decision point and then later finding out that another way was better.

THE COMPASS
Other than the map— the only navigational aid permitted in orienteering is a compass. The compass has two primary uses, we can use it to set the map and to take a bearing. To set the map, rotate it so that the North Lines on the map are parallel to the needle in the compass and that the north end of the needle is pointing to the north end of the map – the top of the map. There are a range of compasses for orienteering: the traditional baseplate compass, the thumb compass and the wrist compass. The type you choose depends mainly on which orienteering techniques you use most. The baseplate is usually used by those who take accurate bearings, the thumb compass is for those who use a mixture of map and compass. The wrist compass is for those who mainly use terrain features to set the map. 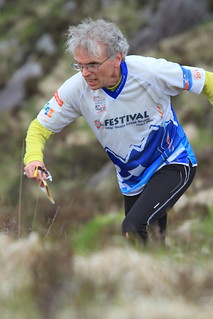