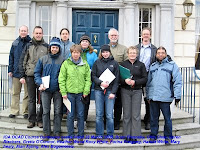 Farina Freigang (Ajax) reports on last weekend’s computer mapping course in Leinster.
There is always something to learn with OCAD
Dunboyne Castle, a fine Georgian house, was built as the seat of the Butler family, Lords Dunboyne in the mid-eighteenth century. It’s situated just outside Dublin and in 2007 the estate was renovated into a glorious hotel and spa. On Saturday 28 March, it was the venue for the second OCAD course conducted by Pat Healy this spring,and the fruits of the full day course matched up well with the class of its surroundings.
Eleven participants from as far afield as Tipperary and Belfast travelled to the course. The schedule promised an overwhelming amount of material to cover and so various exercises and refreshing tea breaks alternated with one another. Everyone brought their own laptop. After an introduction to mapping, the first task was to venture out on a quick survey of the picturesque grounds. The group took bearings of known line features and cautiously mapped lamps, individual contour lines and shrubberies. Back inside, Pat demonstrated all the features of OCAD and explained how they could be used. Then the participants familiarised themselves with the program and tried drawing their notes from the survey exercise onto a draft of the estate (one Pat had prepared earlier!). One crowning moment was the Bézier Curves exercise, where everyone traced several curves amounting into sketches of complex re-entrants, a vital time-saving skill for any mapmaker. The course concluded with discussing details of course setting and map layouts.
The OCAD course has been enriching on every level and refreshing breaks and a delicious three-course dinner made it a very special event. With this in mind, many thanks to the conductor, Pat Healy, and to the Irish Orienteering Association, Aine Joyce and Mary Healy for their help and support!
DUO compete at Mediterranean Orienteering Championship 2009
By Audrey Martin
With the generous support of Trinity Trust, a group from Dublin University Orienteering Club (DUO) recently travelled to the region of Puglia in Southern Italy to compete at the 2009 Mediterranean Orienteering Championship (MOC).
DUO members of all abilities, from novice to elite, took part in the challenging four-race championship that hosted competitors from around the world. A pre-championship training race around and in Palagianello village gave competitors a taste of what was to come over the following days.
The middle and long distance races were held in technically challenging, forested, sand dunes, beside the Ionian Sea. These areas were both picturesque and rugged but runnable. This made for fantastic orienteering, where accurate map-reading and a fast pace were both essential. The gruelling final legs involved a finishing sprint along the beach.
The sprint race which took place in the old town of Castellaneta, took competitors through narrow, winding streets and alleys, through tunnels and, up and down stairs. Adding to the excitement the race took place at night. This meant frantic, headtorch-wearing orienteers pelting in all directions much to the amusement and bewilderment of the locals. This event was a favourite among competitors and the atmosphere was electric with DUO Captain Niamh O’Boyle placed fourth just 30 seconds behind the winner! Well done to all who competed.