Last October, I turned 40 years old. People celebrate this milestone in different ways – for my main birthday gift, I was handed an envelope containing an IOU note for entries to the Jan Kjellström International Festival of Orienteering in the UK. I was both pleased and surprised. I had dragged my family (over the previous few years) through doing the occasional Sunday event, to eventually competing (and having fun) in most of the big Irish events, from the various regional champs, to the Irish Champs, and cumulating in last years Shamrock O-Ringen. I hadn’t thought that they were ready for a big international road trip – but here we were!

For those who don’t know – the Jan Kjellström International Festival of Orienteering (otherwise known to all as the JK) is the UK’s largest multi-day orienteering event, held annually in different parts of the country on the Easter weekend. It usually consists of four competition days:

The event normally has a large number of competitors (over five thousand this year), and is often used as a selection event for most of the national teams. In terms of scale, it’s a major event, and bigger than anything you’ll find at home. As a junior orienteer in the 90s, I had attended several large international events such as the Scottish six-day competitions, but I hadn’t run abroad in years, so my memory of these events was hazy at best. I was looking forward to getting back into it, and this time, with my wife and kids to enjoy it as well.

Anne-Marie had already arranged most of the trip by the time I knew about it – we were taking the car by ferry to Wales (courtesy of Tesco tokens) and driving to a cheap and cheerful hotel in Fleet, on the M3. This location was very convenient for three of the four event days, and only 45 mins drive to the other one. We booked our entries for the events via the usual Fabien4 website, following the directions on the (very thorough) JK website. No need for Sport Ident details – this year, the entire event was being run using EMITtag, the contactless version of EMIT – we would be allocated these at the event.

As the competition approached, we downloaded all the final detail documents from the website. This booklet contained literally everything you needed to know about all the events – days, locations, arena layouts, course details, special instructions, the works. They really made sure that everyone was made aware of everything you needed to know. Some of the Irish orienteers who were travelling to the event started a Whatsapp group, so that the various travelling groups could stay in touch and organise stuff during the weekend.

Finally, the day came and we drove to Rosslare. The kids were very excited to be taking a ferry somewhere, as I had avoided this for previous holidays. However, I must admit it was very convenient to be able to take everything in the boot of the car. We got to our hotel later that day, after several hours of driving, and relaxed for the evening. We travelled on the Wednesday, so we had a full day off before the orienteering started. We filled this with a day trip to Chessington, for a series of roller-coasters and fairground rides. We got an early night, ready for the four days of racing ahead of us.

Friday morning – up early, and the forecast was for sun. Suncream on everyone, pack up our gear, make a few sandwiches and we were in the car, headed to Aldershot for the sprint. When we did our JK entries, I had elected for late start times – this meant we had several hours before we needed to start. This suited me fine, as I like to have a look around and chat to everyone, but the kids found it a bit annoying – in hindsight, I’d stagger the start times in the future, with the kids going early, and me going later. As it was, it was fine since Anne-Marie wasn’t planning to run, so she was taking care of getting the kids to the start and meeting them at the finish each day.

We arrived and pitched the CNOC tent in the club tent area, next to the IOA tent. It was useful to have a few tents – it gave space for everyone’s bags and gear, and  kept all the Irish hanging out together, and let everyone socialise and help each other out. We collected our race numbers and our EMITtags from a large stand at the registration tents. There was even a small model course where everyone could take their new tags for a spin and see how they worked. Eventually our start times arrived and we strolled up to the start area. The start area was a “Silent Start”, as the events were officially world ranking events for the elite classes, which meant once you passed the call-up point, there wasn’t meant to be any talking in the start lanes. Anne-Marie was able to go through with the kids though and make sure they got in the right lanes, and got the correct control descriptions before they started. Once they were started, she was able to stroll back to the tent to see them on the run-in to the finish from the last control, and collect them after the download tent.

Everyone had a good run in the sprint. Conor and Aoife were happy enough with their runs in W10 and M12, and I finished in around 20 mins, 5 mins behind the winner in M40 – about midtable in the results. I found the courses were technically very easy, so they really leaned on the “sprint” part of sprint-o – not my forte 🙂 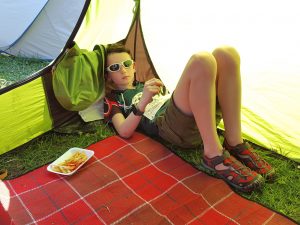 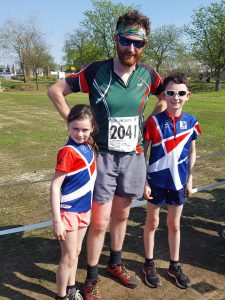 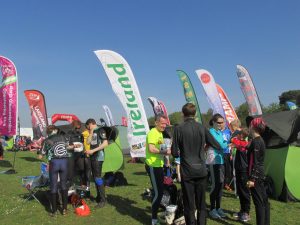 Saturday morning brought even warmer weather – we drove over to Old Windmill Hills, using the directions in the booklet, and got the tent setup for the day. Every day this year, the starts were a short distance from the finish arena, so no need to allow 60 mins to reach them. Anne-Marie elected to use our free time on the day to do a light-green entry-on-the-day course. She found it technically difficult, but got around in less than an hour and finished mid-table also. Aoife had a great run on this day, winning her course (W10B) by a few minutes – she even got back to the finish before Anne-Marie, having left the start at the same time! Conor (like several of the Irish juniors) had some issues with his navigation here – it was a complicated area with a multitude of paths, some more distinct than others so he did well to finish in a reasonable time. We also don’t have a lot of open deciduous forest like it at home, so it probably all seemed a bit foreign to them. I had a decent run, didn’t pace myself great but I was pretty clean and finished middle of my class again. I did end up with a whopper of a (burst) blister though in the heat, so I had that to take care of before the long event on Sunday. We hung around to cheer on Fionnula Rowe at the sprint prizegiving – she had taken second place in the W10 sprint class on Friday.

On Sunday, the weather continued to be amazing, but I had a long course ahead of me, so I would have preferred some cloud cover! We got to the arena at Cold Ash in good time, setup the tents as usual, chatted with all the various Irish orienteers, and got ready for the event ahead. The kids headed off on their courses (slightly longer than usual), and I started pretty late in the day. My main goal was to be finished before the prize-giving at 15:30 🙂 Kids got around ok – Aoife finished second in her class and Conor had an ok run, a few mistakes, but relocated ok, and finished well. My course was long (I ran 14.9 Km in 107 mins) but I enjoyed it immensely – made very few mistakes and paced myself well, so that I was able to kick it on a bit when I turned the final bend into the arena, heard the Irish cheerleaders and the shouts of “Come on Daddy!” I was just about to hand in my EMIT tag at the download when Olivia Baxter yelled at me to stop – I had been press-ganged onto an LVO relay team for Monday. Thankfully, I only had to run an orange leg, so I was happy to oblige. 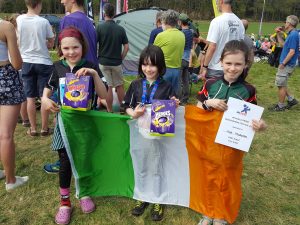 Monday morning – a short drive over to Minley, setup the tents and got ready for the various mass starts for the different relay classes. Turns out my LVO team was actually Dave Richardson, myself and Eileen Young, but we were in the Mixed Ad-Hoc category anyways, so it was reasonably legit. Anne-Marie vetoed my plan to paint my body in the LVO colors in lieu of an o-top. Everyone cheered on the runners at each mass start, and cheered them on again on the run-in to the change-over. The Irish may not have won many medals, but we definitely won the cheering competitions. After the relays were run (fake-LVO finished 14th out of 64), we attended the prize-givings for days 2 & 3 combined – Aoife got a certificate for winning W10B overall, and Niamh Browne got a medal for finishing second overall in W10A. We packed up our stuff and said our goodbyes to everyone heading off to make their way home.

We had a final free day of London sightseeing before packing up on Wednesday and driving back to Fishguard for the ferry home. The weather finally broke, and we saw this funny wet stuff falling from the sky – I have since found it is called rain.

So, all-in-all, we found the JK to be a great family event – it might be large scale, but it’s no less friendly than your normal event – everyone trying to help people and make sure they have a good time. As usual, it’s great to see all the Irish orienteers and hang out and chat during the weekend. The kids had a great time, the courses were no harder than what they would do at home, and they are looking forward to JK 2020 – although Aoife wants to make sure I enter her in W10A (to be fair, when we did the entries last year, she could barely read a map – she’s come on a lot in a few months). It also gave them something to work towards – both Conor and Aoife did a fair bit of jogging around the green outside our house in the last few months, and I think it greatly added to their enjoyment of the event. For me, it was a chance to run in some quality events on great terrain, against some of the best orienteers in the UK and further afield – and most importantly, I didn’t come last.

If you’re thinking of going along to an event like this or even the Irish champs, I suggest you just dive straight in – it’s really no more complicated than regular events, and people will go out of their way to make sure you understand whats going on – and very soon, it’ll all be second nature!

I have been reliably informed that since writing this piece Dave and family have already made reservations for next years festival! 🙂 Looks like they’re hooked.