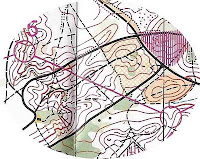 In order to explore the international dimension to the great night-O debate (but actually to avoid annihilation by the CNOC orienteering machine at Ballinastoe) four of us travelled to Mytchett, Surrey, for the 2009 British Night Orienteering Championships. The forests south of London are near perfect for orienteering; open and runnable with complex contour detail and undulating terrain. Mytchett is also criss-crossed with a multitude of tracks, some little ones from mountain bikers and some gargantuan ones gouged out by military vehicles. Recent wet weather had made the churned up forest roads into tank traps that were best avoided, sometimes forcing me to take a cross country route against my path-preferring night-O instincts. But the bramble-free open forest was a joy to run through.
The turnout of 250 on a cold, clear, Saturday night was unusually low for a British Championship event, however it should be noted that they, like us, have a 16+ age rule for night-O. I asked the organisers why the event was held on a Saturday and not a Tuesday and was met with a bemused blank stare.
I did an unscientific survey while waiting for my start slot: of the 27 people around me, three had small hillwalker-style headtorches (about 60 lumens), one had an interesting looking home made job, one woman had a dual-beam system that I think she unscrewed from her mountain bike, and the other 22 had the ever contentious (in Ireland) Silva or Mila 20-watt halogen Night-O headlamp (about 200 lumens).

The popularity of the 20-watt night-O headlamp was illustrated by the fact that the Ultrasport shop at the event was sold out of them before most competitors had even arrived. It was also interesting to note that modern high-power LED systems were in a very small minority at the event. One member of our group pushed the light bar even higher with a brand new 550-lumen Silva Alpha system that lights up the terrain by setting fire to the surrounding vegetation.

The courses were very well planned and challenging, testing our technique to the limit; even tiny lapses of concentration were punished with several minutes of tricky relocation. Proper international night-O is not dumbed-down for the lack of light or for the competitors’ choice of equipment; it has exactly the same level of technical difficulty as daylight-O and there is also little difference in course length. The men’s elite course was won in 6.9 minutes per kilometre.

Úna May of 3ROC was the star of our party, winning the W40 class (but not the British title; she’s still one of our own). Horror of horrors, Úna had a problem with the high power bulb in her headtorch and had to join the ranks of the photon-deprived with a mere 100 lumens, but even this impediment did not stop her magnificent navigation skills shining like a beacon through the darkness. The Lagan Valley junior development squad was also there, spending their UK Lottery money on shiny new Silva headlamps and compasses. Already a formidable force to be reckoned with, they performed very well in the M/W16/18 classes. Maybe we should arrange a night-time shoot-out between LVO and CNOC? He who has the biggest torch wins…
A great orienteering weekend was topped off 14 hours later on Sunday morning with a second very enjoyable run (orienteering, not hillrunning) at the nearby Yateley & Minley Concorde Chase event.

Here are the results of the event and here are the courses and routes on Routegadget.

By the way, in his 2009 event calendar I think John McCullough has found the ideal solution to everyone’s night-O concerns; it is possible to orienteer through the night with no need of a headlamp at this event: http://tinyurl.com/anqlau, the perfect politically correct compromise solution.

Editor’s note: There is still some night-O to be had at home. It’s a great way to sharpen up your navigation and add a new challenge to your orienteering. Check out the Fixtures List on the IOA page. In Leinster we’ve had two night events in Wicklow and there’s one at Tara in Co. Meath on 1st February, plus Killiney Hill, Belfield and Phoenix Park to come. And who says that orienteering doesn’t help your geography? Why shouldn’t Wicklow and Meath feature in the Dublin by Night series?