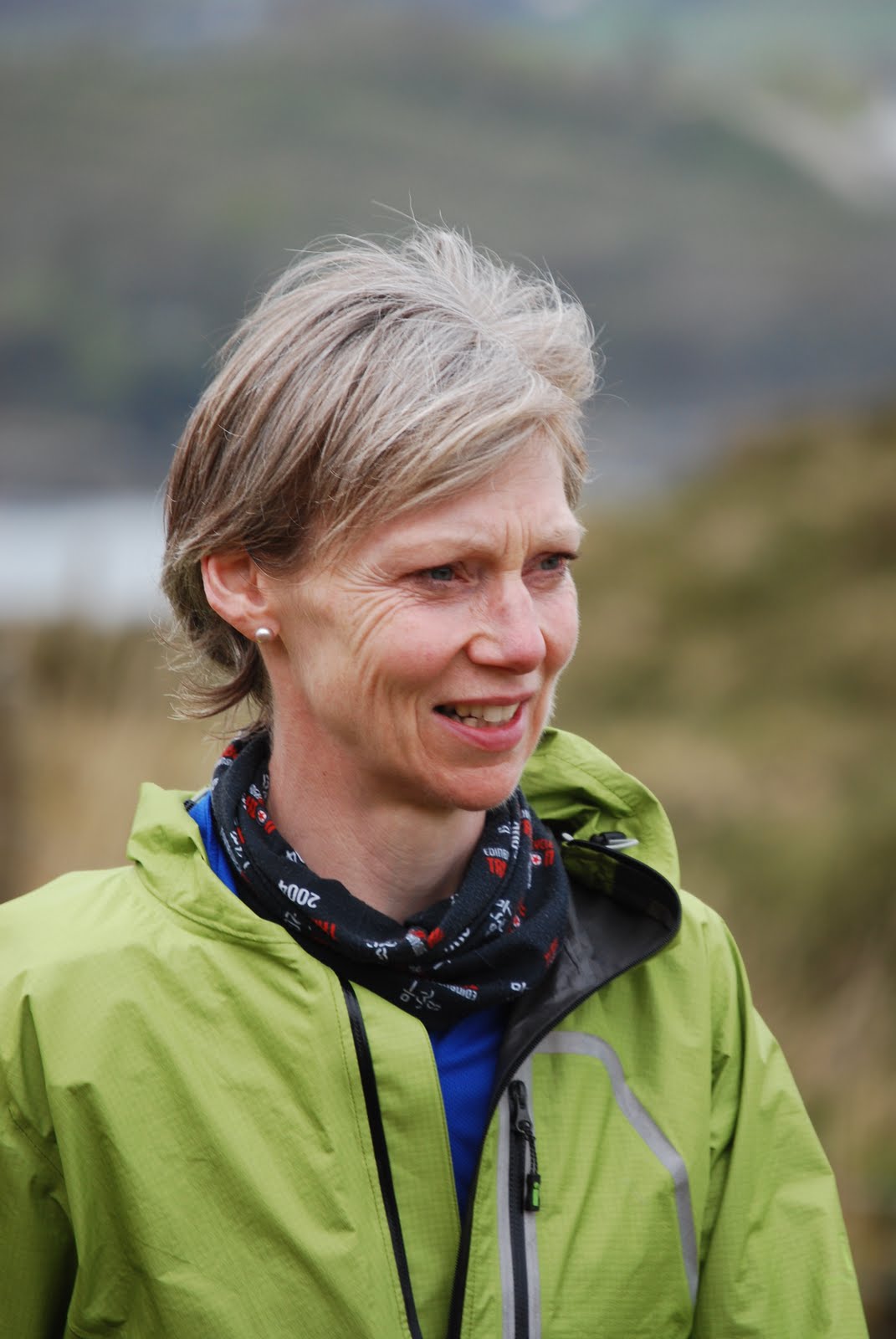 Maxwells to run Everest Marathon
Lagan Valley Orienteers’ Fiona and Bill Maxwell are celebrating their 25th wedding anniversary by running the Everest Marathon, the highest marathon in the world, on December 4th. They are running to raise money for the Everest Marathon Fund, which helps projects in Nepal, and for Maggie’s, a Scottish-based cancer support charity.
Both Bill and Fiona have had cancer and have chosen Maggie’s as one of their charities. (You may have seen a Maggie’s centre in London received a RIBA architecture award this year: see here).
Fiona and Bill have both run on the Irish Veteran Home International team and the VHI team made a donation to their cause. Their daughter, Hannah, may also be familiar to you as she was on the Irish Junior team a number of times.
Their target is £2600 which works out at £100 per mile. Best wishes to them both.
To donate, visit the www.justgiving.com.

MOV 2009: Water, Water Everywhere
Sarah Ní Ruairc (FIN) went to the Venice Street-O event on November 15th …
The annual Meeting Orientamento Venezia/Venice Orienteering Meeting (MOV) or more simply called the Venice Street-O in the vernacular is a well-regarded and highly popular orienteering event. Navigation, while not difficult, is surprisingly tricky and a high level of concentration is required in what is by any standard highly unusual terrain. This year’s event took place on Sunday 15th November with a smaller Park-O event on Saturday 14th.
The event as been attended by disparate groups of Irish orienteers over the years who often combine it with a visit to the city itself, some sightseeing and, of course, the consumption of that Italian speciality, gelato (ice cream).
This year, five orienteers from Ireland attended the event: myself, Kieran Rocks (LVO), Sharon Lucey (BOC), Stuart Scott (UCDO) and Brian Flannelly (CorkO). Stuart and I both attended the event last year and enjoyed it so much that we decided a second bite of the cherry was required. Kieran an old hand at this event; this was his third MOV. His maps from previous events came in useful when navigating around the city. Neither Sharon nor Brian had attended the event before.
The journey to Venice from various locations in Ireland is a complicated tale of trains, cars, planes, 4-hour waits in Gatwick, long emails and butlers and is probably worthy of a novel itself but we won’t dwell on that. Suffice to say that we were all re-united in Venice by about 7.30pm on Friday 13th.
The Park-O on Saturday 14th is a warm-up/training day and acts as a prelude to the main event. Its purpose is to give the participants of Sunday’s event an idea of the terrain, the scale, the type of map and the features marked on it. Only a few hundred orienteers partake in the Park-O as distinct from the 3,600 or so in the main event. It also provided a distraction ahead of the Republic of Ireland vs. France world cup qualifier held that evening, and watched in the Irish pub conveniently located across the street from our accommodation.
The event centre for both days was the same as in previous years, with the finish for Sunday’s event located close to it. However, unlike previous years, the start was located on the far side of Venice (see map). A special boat was organised to bring competitors from the event centre to the start.
There were four courses available to run in the M/W21 category. Kieran and Sharon opted to run M21E and W21E respectively. Brian and Stuart went head-to-head on the M21B course and I decided to promote myself to running W21A, as I had run W21B the previous year.
The map below gives an idea of the type of terrain and the standard of mapping. The white colour, contrary to usual standards, does not represent runnable forest but streets and bridges. The brown colour on some of the streets indicates the areas that are likely to be crowded with tourists, some of whom are likely to be armed with suitcases on wheels – a menace to every orienteer.
Navigating between controls is not as simple as taking a bearing and heading in (hopefully) the right direction. Orienteers have to start thinking about bridges and crowds and decide things like, “Should I head for the long straight run or cut through a maze of tiny streets with lots of stop-start orienteering and constant checking?” or “Should I run down the street that is likely to be crowded or try the empty (ish) back streets?” It is very easy to lose your place on the map and find yourself running along a street thinking, “Where is this?”
As can be seen from the image I had a long leg between controls 14 and 15. Sharon and Kieran both had similar legs, as did the MA and M20 courses. My first thought on seeing the leg was, “Why didn’t I bring money for a gondola?” However, the only thing to do on that leg was to mentally divide it in two; the first half of the run between control 14 and the bridge (the Rialto Bridge) and the second between the bridge and control 15. I tried to choose as many long and straight-ish runs as possible with the least amount of turns and least amount of concentration. However, the leg still took me over 20 minutes and I managed to get in the way of more than one tourist’s photograph.
Once I reached control 16 it was a relief to run out to the seafront and over two bridges to the last control. Some of the busier bridges have ramps laid over the steps to facilitate wheelchair access (I can confirm that the Venice event is not suitable for buggies). All the orienteers were running on the ramps rather than taking the steps and it was strangely gratifying (not to mention good for the ego) to see a man standing at the foot of the ramps with a sign warning innocent bystanders that athletes would be running on the bridge.
I was shattered at the end of the race, so much so that I missed television coverage of Ireland vs. Australia. Although the course length was given as 7.8k I covered almost 12. I found the course a lot tougher than last year and not just because I chose a higher level. Kieran and Stuart both agreed that the courses were tougher than previous years, possibly because there was a new planner.
The orienteering community being small and close-knit, we met Farina Freigang and Soeren Riechers at the event, both of whom spent a while orienteering in Ireland last year. We also met some of the organisers of the Velikden Cup that was held in Bulgaria last Easter.

The city of Venice had to endure two unusual events that weekend. The first was a protest by locals over the perceived decline of the city at the hands of the tourist trade. The second was the sight of brightly-clad people running around the streets clutching maps and with perplexed expressions on their faces as they stopped and started, turned, ran around in circles, down blind alleys, hollered with frustration and then sprinted over a ramp stating how much they enjoyed the event and threatening to return in the future.
The pictures show an aerial photo of Venice, Sarah’s course and a GPS plot of her route. Visit the event web site here.
Unsung Heroes

Finally, spare a thought for the unsung heroes of orienteering – the control collectors. When we’re all back from our runs, getting into the car to go home after the race; when the weather is closing in; when the darkness is coming: who has to go out into the rain and the wind to wrap up the event? The poor control collectors: many of them will have been there all day, some may have run their course, but they are prepared to do us this one last service, no matter what the conditions.
Last Sunday’s splendid Ajax event at Cronybyrne (now called the Vale of Clara Nature Reserve) was a case in point: the organisers had laid on premarked waterproof maps, GPS plotting, tea and biscuits, tents, instant results and great orienteering. Then, right on cue, as the courses are getting to closing time, the deluge starts. So, in case we don’t fully appreciate it: Thanks, guys!
Results, Routegadget are here.
Claravale Event Report by Peter Kernan 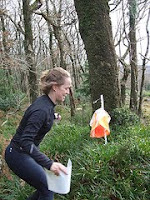 Ajax Vale Of Clara event on November 22nd – 3ROC’s Ger Butler, Colm Moran lead in the trees. Despite dropping to seventh at control 4, Ger Butler pulled the pack back and raced ahead through the trees to win the Brown by 6 mins from Christian Foley-Fisher of DUO.
His clubmate Colm Moran needed only two controls on the Blue to take the lead and hold it over 21 controls winning from Setanta’s Dave Weston. A strong run by 3ROC’s Eoin McCullough saw him take 3rd, seconds behind Dave. Conditions on Sunday were considerably better than Saturday when Marcus Geoghegan, standing in water streaming out of the car park onto the road, reflected on the chances of cancellation.
Months of preparation prevailed and Sunday saw him deliver map, planning and Grade A orienteering to a forest-starved audience.
Complementing his efforts, finishers also got to watch results on screen and drink coffee in the finish tent courtesy of Martin Flynn and Donal Wickham. When the weather turned raw for the last finishers, offers of coffee, met initially with disbelief, hit the right button. It wasn’t all plain sailing: Denis Reidys’ tale of a tree dropping as he placed control 21, reports of the Yellow course “blowing away”, the tent window splitting in the wind, added an edge of uncertainty that was only dispelled when finishers began to flow in well. The Orange course also saw a group of Bootcampers take to the forest as well as CNOC first timer Fergus Foley. Cleared up by 4 pm, the organising club Ajax deemed the event a big success.
See results here.