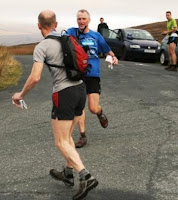 Stone Cross to Lug Relay, September 26th 2009.
There’s a sweet dip at Sally Gap crossroads that drops the first leg runner into the changeover, ending the hour and half battle from Ballinascorney over Seefingan and Kippure. Sweeter still for Mike Long knowing that he had left three Setanta teams in his wake and set up the lead. One – nil for Ajax.
Drifting wide in the forest Shane Enright and Donough O’Keeffe had taken Seahan first, but not by enough to stop Mike taking the lead into Corrig and the relentless climb into Seefingan. Pursuing him across in cloud to Kippure Shane got up to him but could not stay on the 2km drop off Kippure across the heather to the road.
Ajax second leg, Peter Kernan’s, first glance back on Carrigvore picked out an olive green top…Philip Brennan, Setanta…the steady leg plan got changed to hold the lead. A fall off Carrigvore and a stitch from the pace change over the tops of Gravale and Duff hill were probably good signs … at least the body was trying. Mullaghcleevaun East, glances in cloud picked up nothing…was he closing or not? Turning to just off south from Mullaghcleevaun, it was simply a push as quick as possible to Stony Top, crawl up it and Tonlegee and a clean drop to the Wicklow Gap. Two – nil.
Greg Byrne accelerated out of Wicklow Gap knowing that Paul Mahon was sitting in the traps waiting to be released behind him. The last, longest leg needed a clean run.
Cutting road corners up Turlough hill, Greg goes direct for Conavalla, hits the 702 spot height NE of it and has to recover across open bog. Not knowing the gap back, doubt sets in, had Paul Mahon overtaken?
A direct charge for Table Track, onto Camenabologue and the northern cliffs of Lug, between clouds, walkers but no runners. Sweep down clear to the bottom of Camara Hill and Fenton’s. Three – nil, game over.
Mike Long’s efforts over the years coaxing Ajax into the Wicklow Way relay or the Lug Relay had paid off.

None of this adventure would have seen the light of day without a director. Niamh O’Ceallaigh took over the role at short notice, organising the race with a calm, friendly ease that was impressive. Many thanks to her.
– Peter Kernan.