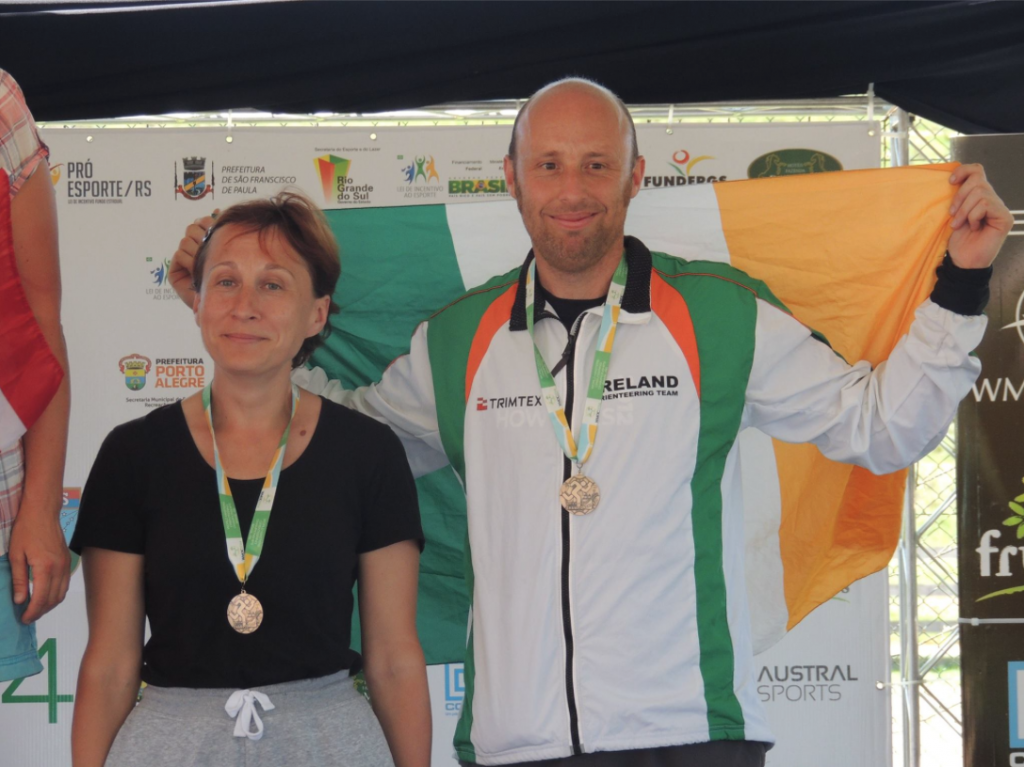 The 2014 WMOC (World Masters Orienteering Championships) were held in Canela, Rio Grande do Sul, in the southernmost state of Brazil, and the first time that a major IOF event had been held in South America.  There was very little information prior to the vent as to what the terrain would be like, so approximately 1600 orienteers from 38 countries made the trip south to find out for themselves.

The WMOCs are an annual event open to anyone over the age of 35 who wants to pit themselves against the best in the world for their age category.  The event has the format of sprint and long distance races, the former having a qualification race to determine which final you run in (which depends on the number of competitors in your classes) while the long distance has two slightly shorter qualification races, from which you time is combined to give you both your final and start position.

The event kicks off with the sprint qualification, which this year was held in a city park in Porto Alegre.  The park didn’t contain much in the way of features so temporary fences had been added to add some navigational challanges. However, even with these the orienteering was straightforward and with short grass and flat ground the challenge was all about not losing tenths of a second.  If you  could run fast, this was a dream course.

The following morning, a two hour drive inland and up in the hills at Canela, competitors experienced their first true taste of what could be in store for the rest of the week at the Sprint Final model event.  The native woodland was thick and rough and very difficult to move through at any pace.  Everyone emerged from this knowing very well that straight was not going to be on option for the final in the afternoon.

The Sprint Final was held in parkland surrounding the Caracol waterfall, a stunning 130m waterfall that was visible from the start lanes (though I’m not aware of anyone actually noticing it!).  The area, though not a traditional sprint type of area, provided a good challenge with a mixture of fast open areas, tracks and steep hills as well as a few controls in the thick native woods.  Not having the speed required for a more traditional sprint, I very much enjoyed this race and was pushing hard enough to ensure that I was on the limit of my navigational ability for most of the race.  Not being a sprint specialist in any way I had no expectations for this race, I had only entered in in order to gain a bit of race practice and acclimatisation for the long races later in the week.  Needless to say I was somewhat surprised and very happy with the result – the first two were clearly running far quicker than I was capable of and I was lucky to finish just ahead of the chasing pack.

The long model the following morning provided a real contrast of both orienteering terrain and styles.  Part of it was open pine forest on rolling hills, this was fast and required fast directionally accurate running, while the adjoining area of native woodland was very slow with terrible visibility, it provided a real challenge but a bit of bad luck could see you pass a control by meters and not see it.

The first long qualification race was entirely in the open pine forest where the only difficulty was running through the pine needles, these were about 6 inches deep and were likened to running in fresh snow or sand.  Things changed instantly for the second race, where we were immediately dropped into native woods with a long leg.  Extreme care was needed here and I (along with many others) were realising that an Australian southern hemisphere compass does not work especially well in Brazil.  Once through the tricky first section the course opened up a lot with more pine forest and an area of open farmland, which didn’t provide any difficulty but is a common terrain type in the area and provided a contrast to woods.

The long final was back in the same area, so the hope was for a decent amount of challenging native woods.  Unfortunately this was not to be the case, with the courses instead focusing a hilly start through mature pine before a long route choice leg.  The basics of this course were sound enough with the controls being fair and in the right place, but the technical challenge wasn’t there with a lot of track options and few possibilities of losing much time.  I was very happy with the way I both ran and orienteered and ran this race, I certainly couldn’t have got any more out of myself on the day.  Again the first two were simply just too fast for me to be able to compete with (joint winners), so no regrets with matching my sprint result, especially as again the chasing pack was close behind me.

Overall this was a surprisingly enjoyable weeks orienteering.  The terrain was much better that I had been expecting and it all ran (from the competitors point of view at least) with no major problems.  I went out not knowing what sort of results I was capable of or indeed what the competition was like in my age category, so to some back with the performances that I achieved I am more than happy with.  I look forward to doing the WMOC again sometime and trying to improve on this set of results.