Every year our athletes travel far and wide to train on relevant terrain for their upcoming international competitions. These trips allow them to experience each country’s, often unique, orienteering terrain and  the subtle differences in styles of planning and mapping in each territory prior to a big event. This is vitally important for our athletes; ensuring they are prepared for international competition. This has an added bonus for our athletes giving them a great opportunity to see unusual locations throughout the world, although it is always done on a shoestring budget!

Conall Whelan and Ruairi Long, both M20 are currently training for Junior World Orienteering Championships which will be held in Hungary this July. Conall gives us an account of their trip to the JWOC training camp in March this year.

As students Ruairi and I evidently searched for the cheapest route to travel to the third official JWOC training camp. This involved staying overnight in Budapest in a quirky hotel outside the city on the Monday night. Christian, a Canadian orienteer, met us in the city on the Tuesday and we all travelled on the train together to our accomodation for the camp. The train took 2 and a half hours, which we happen to share with a fellow UCD 2nd year engineer, whom we met at the station by chance! Thankfully he was able to fill us in on the ins and outs of the country. It was a very old train which gave us a unique experience and a step back in time for us millennials; stopping in the middle of roads where people walked off the train and straight into cars, and the toilet even fell straight onto the track. 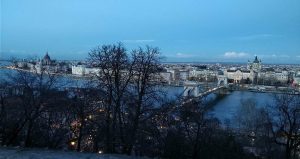 After the long train journey through empty infertile plains and plenty of what appeared to be wasteland, we reached the so called “city” of Kiskunhalas. The hostel we were staying in was a short walk from the station; or the place where the train stopped and people got off, station is probably too strong a word. The link for the accomodation sent us on a small tour of the neighbourhood until we eventually figured out where it was. It seemed that we were the first to arrive to the hostel as the secretary hadn’t got a notion of what was going on and also didn’t speak english, nor did we have Hungarian. Later that evening teams from other countries arrived such as Bulgaria, Britain and Turkey. We had taken the self catered (cheapest) option, so first thing on the to-do list was to take a quick trip to the local Lidl. Stunned by the local prices we went all out and bought many pastries to keep us going. Also, us being athletes and all, stocked up on water and ice tea while we were there.
The first day of training was exciting. The morning session was a bit of a drive away which our driver didn’t seem to realise as we turned up late. It was short 3 control intervals. The evening training was even more interesting. We were given a map with four quarters on it. Each quarter had a different colour. One brown which focused on contours, one green which was vegetation, another black which was just vegetation changes, and yellow which was open land. The course provided, crossed all four quarters. It was a very different orienteering experience for me, something that I’ve never tried before. 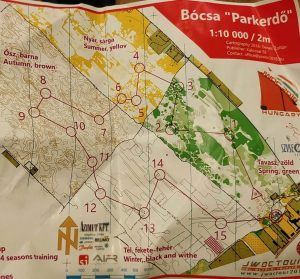 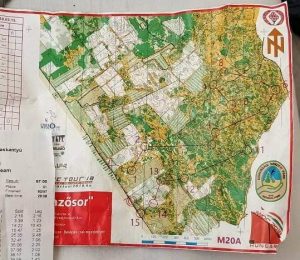 The next day was a training race around the juniper “maze”. A very technical course that seperated the men from the boys. It was a slow and painful race due to the prickly bushes, but nevertheless we completed it. An unforgiving, challenging, but fun terrain.
The third day was a sprint event in a city called Szeged in the south of the country. The sprint was fast and flat with a lovely church in the middle of it. Christian starting one minute behind me, caught me by control 8. This was quite frustrating for me, especially as he was wearing a body cam so it was all on video. I chose an alternate and far worse route choice after he caught up with me, which meant that he over took me without even realising it. It was a slippy course due to the rain shower that had begun that morning and continued until the next day.
The following day we entered the Szeged cup. This was a two day event, quite like the JK in Britain with around 1000 people attending. John and Cuan Riordan joined us for the two days, driving us around and participating themselves. Ruairi must have been holding back during the days of training as he got off to a flying start in Saturday’s middle, finishing only 3 minutes down on Christian, as opposed to my 13 minutes; don’t even ask. Christian had a stormer finishing 8 seconds down on the winner. The terrain wasn’t as technical as during the training. Open land with scattered trees and small hills with 2 meter contours, scattered the map. An extremely fast race with runners reaching paces of as low as 4 mins/km. At this speed there are no room for mistakes, seconds matter.
After a long 2 hours of waiting around in the car, trying to heat up and hiding from the pouring rain, we got back out and warmed up for the relay. Two fast races in one day was a struggle, especially in the miserable, cold rain. John, Cuan and Ruairi formed one team, and Christian, a British coach called Nixon, and I formed a second team. Ruairí flew around his 3 kilometer course in 15 minutes, beating all the children and elderly in the race and arriving back more than 5 minutes in the lead on first leg. Nixon also flew around the 6 kilometer, men’s 21 course coming in in 4th place. An unfortunate thing for me as it meant I had to perform! Christian held his position and handed over to me. After the mornings disaster I went on and had a fantastic ru….., just kidding, I bottled it. A 4 minute mistake cost me a handful of places. Frustrating but the main thing is that I had fun, or at least that’s what we are told as children….
The next day, Sunday, was the long distance. This was the first race we had on a 1:15,000 scale map there. A whopping 14 kilometer course was set out for us. Luckily it had minimal climb so it wasn’t as harsh as it sounds. Running in sub zero temperatures was interesting, but once we got moving it wasn’t too bad. Christian and Ruairi once again had great runs with me finishing 7 minutes and 5 minutes down on them respectively. A minor mishap in a more technical section of the map, and a general slow pace meant that I lost a handful of minutes. The course was quite easy. Half the map was squared sections of forested trees, the rest being the same as the middle distance terrain the previous day.
That evening John Riordan kindly drove all three of us and his son Cuan to the airport where we flew home. Our flights were delayed by an hour due to heavy snow in Dublin airport but we arrived home that night safe and sound.
Overall the trip was memorable and much needed taster of the unique terrain that central Hungary has to offer.

I’d like to thank John Riordan for putting up with ferrying us around for the weekend. I’d also like to thank Jeni Pim and Mike Long for the organising that went into the Irish outing.