Many thanks to Cliodhna Donaghy for her account of the Junior Trip.  I would especially like to thank, on behalf of the Junior Squad, Toni O’Donovan and her family.  Without whom this trip would not have happened, and who’s dedication to the cause went above and beyond the call of duty.

Saturday 21st July was the beginning of the 2018 O Tour, as around 30 juniors and their families (from all over Ireland) made their way to Les Plans d’Hotonnes, a tiny village located high up in the Jura mountains. We settled into our gites, and then the 60 or so of us met up for dinner at the largest gite. A few card games later we headed off to bed for the nine o’clock start in the morning.

Toni began each of the following three days with a 10 minute core session and a briefing on what we would be doing that day. The days were filled up with technical training to prepare us for the challenging terrain that the OO Cup had to offer. We did several different exercises each day, including corridors, star exercises and talk-o. Each morning training session ended with lunch and a trip to a nearby lake to cool down. In the evenings we all ate together in the warm sun and afterwards the adults relaxed. Meanwhile, the kids ran around playing rounders, tip the can or looking for spoons which had been hidden while playing the card game. Everyone helped to prepare the dinners, with two adults being helped by four juniors each day. 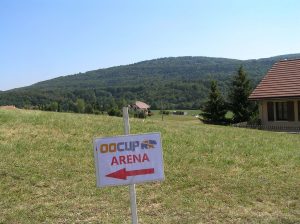 On Wednesday the OO Cup officially began. Competitors were firstly faced with an uphill walk to the start, followed by a mainly fast run with lots of small hills and a wide range of paths to navigate off. Many of the Irish were shocked to find out that the most technical day was yet to come!
Day 2 was incredibly tricky, with much detail such as tiny re-entrants and spurs. It was nothing like any of the terrain we have in Ireland and small mistakes easily turned into large ones.
The final 3 days were held minutes away from the gites in which we were staying. There were lots of open areas and paths to relocate off but there were also plenty of tricky parts to keep competitors busy. The weather stayed lovely until day 4 when it lashed, but by day 5 it was absolutely roasting. The Irish just about managed to stay in the heat for the prize giving, in which both Marcus Pinker and Ruth Lynam won local cheese by coming first in M35 ultimate and W50 ultimate. The huge cheers for them from the Irish momentarily put a halt to the prize giving!

The next two days consisted of more training but on the areas we had just raced on. Again we went to a lake afterwards where the acrobatics of the boys attracted some interesting attention…
All too soon we were eating our last meal together, and after trying to master Marcus’ cork trick we said our final goodbyes. In the morning we all went our separate ways already looking forward to the next training camp.
A big thanks to everyone who made this trip possible, especially to Toni who put weeks of effort into making sure we got the most out of the 10 days. It was an excellent tour and I would highly recommend these training camps to all juniors as a chance to improve on your orienteering, but also to meet new people.