A surprisingly strong squad emerged from the enforced hibernation of lock down and a team of 21 young athletes were selected to travel to the Junior Home Internationals in Surrey. The event was excellently organised by South London Orienteers. Luxurious accommodation was provided by PGL outdoor activity centre and the Individual event at the Devil’s Punchbowl was planned to have a fiendishly steep finish up to the Centre’s woodland. It was great to have a full complement of W14s and a particularly strong performance from Great Easter Navigator’s (GEN) Fionnuala Rowe who finished in 6th place, her older sister Emily also performing well finishing 8th in the W16 race. Lagan Valley’s Meadow McCauley led the Irish field at W18 in her last performance at JHI.

The terrain was very tough, and not your typical southern forest. There was hard running through thick undergrowth and several very steep climbs so our M18s had a tough outing, but again performed well with a 6th and 8th place for Eoghan Whelan (South East Viking Orienteers) and Liam Cotter (Bishopstown Orienteering Club), and a respectable time in 11th place for Lagan Valley’s Dan Earnshaw. This is also the last JHI for all these young men.  At M16, the Irish boys finished in consecutive places with Josh Hoare (Bishopstown Orienteering Club) leading the pack and Oliver, Dan and Ben (LVO), in succession all showing how physical the terrain was.

Highlight of the weekend had to be Gerry Browne’s performance winning 3rd place in the M14 race. He followed this with such a blistering relay leg that his 3rd leg runner (nameless) wasn’t quite ready for the handover. There was no question about who should be awarded the shield for Best Irish Performance. Well done Gerry!

The relay on Bramshott Common provided some fast running and unfortunately a confusing control with a mis- number. Despite this all our teams finished error-free giving us a comfortable lead over a diminished Welsh team and we took home the Judith Wingham Trophy again.

Many thanks go to the parents who travelled with the team and especially to Eoin Browne who lent his O-shoes to Ben whose bag stayed in Gatwick for the weekend. Special thanks to Stephanie Pruzina for coordinating and organising the Irish team in the absence of a Junior Affairs Coordinator for the IOA. Made especially difficult under the current covid restrictions, differing North/ South Ireland and UK! Of course enormous thanks to SLOW for putting on a great event and particularly Mathias and Abi  who co-ordinated the weekend.

One final learning point…we might need to recruit some musical talent for next year. If we can’t beat the Scots at O maybe we can out-sing them!

Links to Full Results can be found at SLOW’s website here.

More thanks to Stephanie Pruzina for providing the basis of this article. 🙂 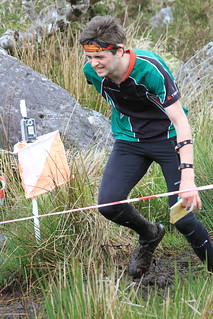