The following have been selected to represent Ireland at WOC 2012 in
Switzerland:
Ciara Largey, Rosalind Hussey, Darren Burke, Nicolas Simonin, Ruairi Short, Colm Hill, Hugh Cashell and David Healy.
Congratulations to the athletes on their selection, and thank you to the Selectors for their work. The team can be followed on Facebook , Twitter (Irish_O_Squad), and on the Squad webpage.
Ros and Ruairi also form the Irish team for the World Student Championships at Alicante in Spain in the first week of July.
– Darren Burke Director of High Performance Orienteering

Ireland at EYOC
Results are filtering through from France where the Irish team of Aoife McCavana, Róisín Long, Niamh Corbett, Jonathan Quinn, Eoin McCullough and Jack Millar are taking on Europe’s best Junior orienteers.
Jonny scored a magnificent 15th place in M16 in the Sprint race at Meymac on Friday, and on Saturday the best result was Róisín Long’s 37th in W16. See results, maps etc here.
Thierry Gueorgiou had his first big victory in EYOC back in 1995 – this was the first time the orienteering world got a real look at this exceptional orienteer.
“As I now look back, my victory in the EYOC 95 was the real start of my orienteering career and therefore always had a special taste,Gueorgiou says. -That’s also why I have much respect for this competition which gives the first big emotions to young orienteers.”
Looking at the results it is clear that none of the team will be pleased with their runs, except for the two mentioned above, but there’e still the Relay to run on Sunday. Watch this space for an update …
(Update 1st July: The W18 girls finished in 18th place with a storming 3rd leg from Niamh Corbett, but finishing a tantalizing 5 seconds earlier would have moved them up two places. The M18’s had two solid runs from Jack and Jonny but an unfortunate error in reading a control code on leg 3 caused the team to join the other teams who mispunched –  10 teams disqualified, including our nearest neighbours, Great Britain, and only 19 teams finished.).
The next EYOC will be in Israel in November 2013.
Jukola 2012

A thunderclap, a flash of light and the dam bursts: a river of fire floods out from the field towards the forest: the 64th Jukola relay has started.

The thunderclap was a Finnish Army tank used as a starting pistol for the 1500 teams running into the Nordic twilight. It is 10.30 on a June Saturday night and we are in Vantaa, 10 km from Helsinki Airport. Teams have come together from all over Europe and from further afield to take part in the world’s biggest orienteering relay. The organisers expect some fifty thousand people at the event over the weekend – between teams, spectators, families and supporters.
A few Irish runners are involved: Nick Simonin, running for his Swedish club Lidingo, placed 40th , Colm Moran and Conor Short running for their Swedish club OK Tisaren (132nd), Niamh O’Boyle, Julie Cleary running the Venla for London OK, and myself and Ronan Cleary also running for London OK.

The orienteering kicked off with the women’s 4-leg “Venla” on a baking Saturday afternoon: a small affair of only 1272 teams sent out to make tracks in the forest for the men later (Not really! It’s a very serious and hotly contested race). The legs of the Venla range from 5.7 to 8.5 km. The runners were going out in 31 degrees at 2 pm , but later in the day things cooled for better running conditions. (Unfortunately the weather changed for later runners in the Jukola on Sunday morning, with heavy rain and 13C).

This year’s Jukola was the biggest ever: 1689 teams of seven. The competition centre was based at a sports centre with a running track, sports pitches, swimming pool and outdoor skating rink. All the facilities were close together: food, assembly, toilets, the field of army tents for the teams. Only the showers and sauna were a bit out of the way.

I was a member of a loosely assembled London OK team consisting of three Finns, two Irish and two English runners. We have had much the same group running at Jukola for several years – I think this was my 7th outing – and there was the usual jockeying for who runs which leg, or maybe who doesn’t run which leg!. This year, fitness and injuries played their part in determining who ran what. The first leg, the “river of fire” mass start, is probably the defining leg of the Jukola, where you get swept along in the flood through the night for 12.8 km. The first three legs (12.8, 12.7 and 14.1 km) are largely night legs (at least for the faster teams), then the 7.8, 8.1 and 10.3 km legs in dawn and daylight and the final 15.5 km leg to the finish, making 80 km in total. None of us wanted to do the last leg, but Ronan decided that the buck stopped with him and took it on.
Bear Rock?
Before the Venla started the announcer warned the runners that there was an out of bounds area used by hunters (archers, actually) with life-size elk, boar, bears and wolves as targets: don’t be frightened if you see them. He repeated the warning for the Jukola runners: could be unnerving at night. In a departure from the norm (reportedly to improve TV coverage), the mass start maps were not strung on wires above the heads of the runners, but put on the ground at their feet.
Evening. Time to plan. Eat about 6 pm (the food is good, about €8 for a main course with bread and a drink. Take your plate and eat on tables in the open air). Go to the orienteering shops and sports supermarket (they usually have good value in sleeping bags and other bits and pieces). A huge selection of O-gear, shoes, headlamps (from €10 to €800) and anything you can think of. Except bananas: for some reason there was no supermarket this year and you couldn’t get a banana, the staple food of the distance athlete, for love or money. And this year the usual betting office, where you could bet on who would win the race, seemed absent too.
8 pm: time for the first leg runners to eat. Join the queue. There’s obviously a problem – they have run out of food and they won’t have any for another hour! Disbelief. Go to look for a grill selling something: at last, pytt y panna (fried potatoes with bacon – a lifesaver). Later, the food arrives for the restaurant proper and calm is restored. 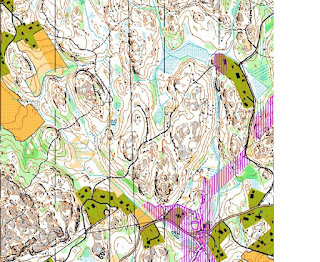 The rain struck when he was half way around but he kept moving forward to the end.

At the front end of the competition, Finland’s Kalavan Rasti had 8 minutes to spare over Swedish club Malungs OK so Kalevan Rasti will run next year as team number 1. Last year’s winners, Halden from Norway, finished 3rd, a further 4 minutes down. Halden took first place in the Venla, race, with Finlands Paimion Rasti second and Denmark’s OK Pan third.Some of us decided that it would be our last Jukola: the legs on the course aren’t getting any shorter and none of us is getting any younger (don’t ask the average age of the team!).
But then, look at the shapes, sizes and ages of the runners coming in. Look at the hundreds of teams behind us.
See the Jukola web site here for results, photos, routegadget etc. If you’re not there you can follow it live on the internet. Jukola party, anyone?
Look at next year’s Jukola in Jamsa. Two and a half hours drive north of Helsinki. One and a half from Tampere. Will Ryanair still fly there next June? How about Norwegian or SAS? Sandwiched in the middle of the Leaving Cert before Chemistry and Economics? Hmmmm….
Running Shorts

Ireland finished behind Wales in the Veteran Home International in the Mournes on July 16/17th. It’s a foregone conclusion that England and Scotland will be out of reach, but there can be intense competition between the two smallest orienteering nations. Despite the men leading Wales by 39 to 38 overnight, the ladies didn’t fare so well and the relays on Sunday were a downward spiral where Wales extended their lead to finish with 149 points to 117. Meanwhile, England extended their overnight lead to beat Scotland by 258 to 220.
Conditions in the Mournes on Saturday were trying, with heavy rain and swollen streams but Sunday’s relays at Tollymore were run in better weather. Photos, results and information can be found here.
Traditionally the VHI has been held in October or November, typically on exposed open mountain areas in far from perfect weather. Running the event in June seemed like a good idea, I’m sure, but it did have the side effect of moving November’s weather forward 5 months …

Setanta Rogaine Report
Setanta Orienteers’ ran their 15th Rogaine in Wicklow on June 23/24. Not too many orienteers were running this year, but you can see the resultshere. This year the 24-hour competition started at 2 pm on Saturday and the 6-hour at 8 am on Sunday, so they would both finish together. Stephen and Timothy Martin (Dark Peak Fell Runners, UK) won the 24 hour and Steven Linton (NWOC) won the 6-hour.
The start was near Glashaboy, in the Wicklow Gap area, but many of the controls were much further north, meaning that a return to base for food, rest and shelter wasn’t such an attractive option this year.