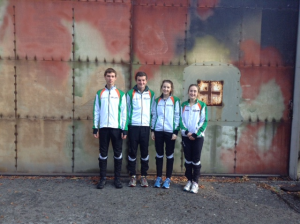 Ireland were represented at the Junior European Cup (JEC) by Roisin Long, Niamh Corbett, Paul Pruzina and Eoin McCullough which took place over last weekend (3-5th Oct 2014) in north east Belgium. The annual competition covers classes of W18, W20, M18 and M20 with each country allowed up to six participants per class. 14 countries participated this year with GB, Sweden, Norway and Russia fielding full teams while Ireland sent one representative per class.

The team took the red eye flight to Eindhoven on Friday morning and after settling in at the accommodation in a complex consisting of hundred of small houses, were ready to start around 5pm for a sprint race though the mostly pedestrianised city of Lommel. Full quarantine procedures were implemented with a slight panic when we were told that one of the controls had to be moved from an underpass to the top of the bridge due to an unhappy resident. Paul Pruzina had an excellent run in M18 to finish 36th in a time of 15min and 3 sec just 1.46 behind the winner Joey Hadorn from Switzerland. Roisin finished in 39th just 2.42 behind the winner. Eoin in M20 finished just 1.58 behind the winner Oskar Andren from Sweden while Niamh finished in 44th on W20.

The long distance was exactly that: 13.8km for M20 to 9.1km for W18. Nevertheless, the terrain was pretty flat meaning that the running was fast and winning times around the hour. The day was hot (23 degrees) and sunny to match the beach atmosphere in the sandy finish area. The start was from a military compound several km from the finish. Roisin finished in 41st position 19 minutes behind Tilda Johansson from Sweden who completed the course in 60 min. Paul was 42nd while Eoin was 46th in M20 where the winner, Anton Johansson, won by a phenomenal 6 minutes with local favourite Tristan Bloemen in 6th only 50 seconds off second place.

The relay on sunday morning was in similar sandy and forested terrain, the hint being the name of the map: the Sahara. A compact field acted as start, spectator control and changeover. There were only two relay classes, M and W, and with over 30 teams in each, there was a great atmosphere at the start and throughout the race. The spectator control was particularly entertaining with several runners literally passing the control and failing to notice it resulting in loud callbacks. While Anton Johansson put in another stunning run to come home clear by more that a minute in the first leg, the Danish men came through just like their women’s team to win. Ireland M team was lead off by Eoin who had a great run, as did Paul and Roisin who came close to embarrassing GB and German teams.

The Belgian organisation was top class and just as impressive was the support of their athletes no matter what position they were in. This is an excellent team competition held in reasonably convenient places for us in Ireland and over a short time span. However it is during school term. Next years competition is in the northern part of Germany. Will we be there?