Happy New Year
Rather belatedly, Happy New Year everyone. After the Christmas excesses (the Goal Mile, maybe followed by a run up the mountains on Christmas day, then orienteering on St Stephen’s Day, followed maybe by the Djouce trail race, the Setanta hike and a race on New Year’s day), it’s good to be back to normal!
Why not make a new year promise to yourself to try some new orienteering experience this year, whether it’s night-O, Trail orienteering, sprint-O, mountain bike orienteering, running in a new county, a new province or a new country? The world is your oyster …

In the current economic climate, orienteering can represent great value for money: where else would you find a fun day out for a family for an entry fee of €20 or less? One of the major costs of orienteering is transport, however. This could be tackled in several ways: bring to people to the orienteering by public transpiort, by special O-buses (there used to be buses organised to events so that non car-owners could still travel) or by car-pooling as the IMRA have been forced to do to reduce parking difficulties. Another way is to bring the orienteering to the people: the growth of urban orienteering, in the UK and across the world, has opened up the sport to runners and others who might not have tried it before; you can run events on people’s doorsteps and still provide an orienteerting challenge.
With sprint and urban races taking place in competitions with the profile of the World Championships, we can no longer say that we don’t have suitable terrain in Ireland. We may not have the complex forests of Scandinavia, but we have the towns and cities to make challenging city races and maybe draw in a whole new generation of orienteer who will then move on to the classic sport.
Anywhere with a higgeldy-piggeldy core should provide a good challenge; throw in a few parks, a few hills and some buildings like a university campus and you’re almost there. Look at any map of an old Irish town and see the potential: Cork, Wexford, Waterford, Kilkenny, Drogheda, Newry, Galway, Howth, Sligo, Dublin, Balfast, Derry …  Of course we need the orienteers there to first produce the maps and then to capitalise on the event and grow the sport, and we need the existing orienteers to support the events, but even might oak trees grow from little acorns …

New Squad Blogs
Ivan Millar has launched two new blogs for 2012: one follows the Senior Squad’s preparation for the World Championships in Switzerland in July (see it here) and the other follows the elites generally – see here. World Championships selection will take place at the Jubilee 5-Days orienteering in Scotland at the beginning of June, unfortunately clashing with the Irish 3-Day in Galway.

Try Night-O
It’s one of orienteering’s better-kept secrets. Night orienteering adds new challenges – it makes even the most innocuous areas interesting, and makes interesting areas much more so. There are three events left in the Dublin by Night series (Barnaslingan (behind The Scalp near Kilternan) on Jan 28th; Slade Valley, Saggart on 4th February and The Curragh on February 11th). The Northern Ireland Night Championships are also on February 11th at Parkanaur, near Dungannon, Co. Tyrone. Details from LVO here. Note: For insurance reasons, night orienteering is restricted to M/W 16 and above. 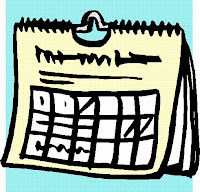 2012 O-Planner
It’s that time again – armchair planning for the events you’d like to take in in 2012. There are competitions at home and abroad, one-day to multi-day, suitable for all ages and abilities, some family-friendly, some less so, some big, some small. If you can recommend any events that you think others might enjoy, send the details to TIO and I’ll include them. Have a browse here and see what appeals to you….

Do some night orienteering! See the IOA fixtures list for details.

18-21 Portugal O-Meet, see here. This is tied in with the date of Easter but this year it coincides a bit with schools’ mid-term: good for kids, bad for air fares. Inland, not too far from Porto.
18-20 Morocco 3-Days including sprint and supersprints. See here.
24-25 Israel Championships near Jerusalem. See here.
25-26 Marina Grande, Portugal. World Ranking event. See here.

2-4 Murcia, Spain. Details here. At this time of year the south of Spain can be lovely to run in: oranges and lemons fresh from the trees at the finish …
10-11 Slovenia. Karst limestone terrain near Trieste. See here.
23-25 Mediterranean Championships, Rome. 2 middle distance, 1 sprint. Park World Tour. See here.
24-25 Danish Spring: a new format and a new name for the Spring Cup. May be a bit early for some – there can be snow on the ground still, but this is when the Scandinavians come out of hibernation. Seehere.
24-25 British Sprint and Middle Distance Championships, York. Detailshere.

5-7 Irish Championships in Kerry. Sand dunes at Castlegregory, Inch and the Maherees. Bishopstown OC.
5-7 British Championships, Cumbria. A pity they clash with the Irish Champs. A new BOF rule means that non British Citizens can’t be British Champions, though, so we may see a few more of our UK-based orienteers running at IOC instead of BOC. Details here.
5-6 Tio Mila overnight relay for teams of ten runners; legs from 7 to 18 km, near Linkoping, Sweden (served by Ryanair). Details here.
5-6 European Rogaine Champs, Kaunas, Lithuania. See here. Good preparation for the annual Setanta Rogaine! (A rogaine is a long distance score event, typically 12 or 24 hours).
14-20 European Championships, Dalarna, Sweden. Public races from 17th to 20th. Entry cap at 5000. Details here.
17-20 Holland-OL. 5 events in 4 days at Breda in Holland. Detailshere.

… which brings us back to where we came in!

A really good place to look for events abroad is in the calendar section of the “World of O” web site here. More information and reports on these events will be found in CompassSport magazine (http://www.compasssport.co.uk/). Some of the information in this list came from CompassSport. 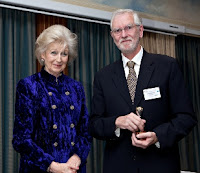 As reported here before Christmas, Harold White has received a Torch Trophy for his voluntary work for orienteering over the years, culminating in his work as coordinator of the successful JK 2011 in Northern Ireland. The photo shows Harold with the award and Princess Alexandra at a ceremony in London. Harold is IOA Technical Officer.

International Trail-O 2012
There are two international Trail-O Championships in 2012. The European Champs will be run alongside the Foot-O in Falun, Sweden from 17th until 20th May; the team can be up to a maximum of 6 in each of the Open and Paralympic classes. The World Championships will be run as a standalone event in Scotland from 6th until 9th June; the team can be up to 3 in each of the Open and Paralympic classes. Preliminary entries have to be in by 15th and 31st of January respectively so this message is seeking expressions of interest from those wishing to be considered for selection in order to gauge the potential size of team. Please respond urgently to atgartside (at) yahoo.co.uk.
It should be noted that those selected will be required to bear the full costs of participation; at the moment it looks as if these will be for ETOC €225 plus accommodation and meals plus return travel from home and for WTOC GB£455 plus return travel from home.

Delve into the past in the Irish Orienteer Archive from 1982 here.