On the 23rd and 24th of November, 3 Irish junior Squad members travelled over to the annual Great Britain M/W16s training weekend. Caoimhe O’Boyle (CNOC), Zac O’Sullivan Hourihan (BOC), and Robert Pim (WatO) were the group who availed of the great training opportunities the training had to offer. The following is a report of Caoimhe O’Boyle’s experience.

Last weekend, I attended the annual M/W16 Hawkshead training weekend held in the Lake District, England. Over the weekend of the 23rd and 24th of November, the Southern Irish team of myself, Zac O’Sullivan Hourihan and Robert Pim travelled to England to what we’d been told would be (and was) an excellent two days of training. We arrived at the hostel in Hawkshead quite late on Friday evening, thanks to my awful map-reading from Manchester Airport 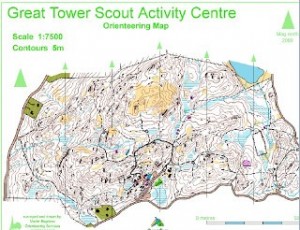 On Saturday morning we attended a brief introductory meeting, before setting off for the first training area of the day. Great Tower Scout Activity Centre consisted of a technical map with great contour detail. The forest was very runnable with little to no bracken. After warming up, Paul, our coach for the weekend, set us off on the first of three training courses. The first course was designed for us to focus on using attackpoints and exit attackpoints/catching features on a 1:7500 scale map. Next, we moved on to a similar course, aimed at simplifying routes and visualisation of the control circle. The final exercise at Great Tower was a map memory course, which Robert, Zac and myself ran before heading back to the car and driving to Tarn Hows. 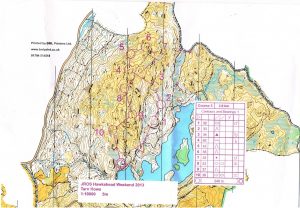 Our first course at Tarn Hows was designed for focusing on contours and using compass bearings. The area of open hilltop on the map was similar to something you’d find in Ireland, with slightly steeper ground than earlier. I found the short legs on this course perfect for contour visualisation. Afterwards, Robert, Zac and myself did another map memory course before returning to the hostel. We all agreed our first day of training went very well, and each of the courses were very useful for focusing on different aspects of orienteering techniques. Later that evening, there was a nightime sprint relay around the hostel grounds on the 1:1000 scale map [editor’s note: that’s one thousand, not ten thousand!!]. There were over 30 controls on the 1.5km courses. I didn’t run the relay, but it looked like  good fun.

‘Contours and Bearings’ at Tarn Hows 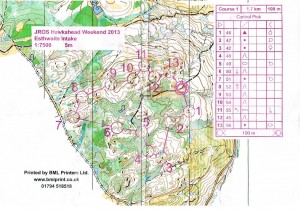 The next morning, we drove to Esthwaite Intake for our last few training exercises of the weekend. We started off with a control pick
exercise. The short legs proved how important your direction is while exiting a control. Next, there was a tricky corridor exercise, followed by a course with longer legs. Our aim for the longer legs was to combine all of the techniques we’d practised over the weekend together. Robert and Zac ran a longer course than me, so I re-ran a section of the control pick backwards while waiting for them. After a short warm-down we returned to the car and headed back to Manchester Airport.

We all really enjoyed the weekend overall, and we definitely felt it improved our orienteering techniques. It was a great opportunity to train on terrain that we don’t have here in Ireland. I learned a lot about using different orienteering techniques over the weekend, and I would definitely recommend for next years M/W16’s to attend in 2014. It’s a great opportunity to improve as an orienteer! Thanks a lot to Mike for organising and to Paul for being a great coach for the weekend!