The two Irish junior relay teams aquitted themselves well by taking 14th and 15th places in the ‘Motion’ relay at the Spring Cup. In the process, they trounched the team leaders team who could only manage 25th! 54 teams competed in this age class.

After their runs, the juniors experienced a thrilling finale to the men’s elite relay. A team from IFK Goteborg went out with a 2 minute lead on the last leg, with Swedish team runner Jonas Pilblad on the last leg. They were being hunted down by a chasing pack that included world champion Daniel Hubmann, Jamie Stevenson and the incredible Matthias Merz. Merz had started five minutes down on the lead and in a last gasp attempt, almost took victory from Goteborg. Pilblad held out for an impressive victory by a mere 8 seconds! The next three teams finished within 14 seconds of Merz. This exciting conclusion to the weekend was inspiriation for everyone and the juniors have showed ample talent over the weekend to one day be involved at this top-class level.

The Spring Cup classic event was held on the northern coast of Denmark, on Tisvilde Hegn ost. The area was a mixture of open forest running, technically more difficult ‘green’ areas and some open sand dunes. The team were out early in the morning ready to face the challenges ahead. There were some solid performances today. Top of the Irish juniors in the H18 elite class was Kevin O’Boyle. Kevin tells us about his performance: ‘In general, there were a lot of green areas on the map which I tried to avoid, as keeping direction in them could have been difficult. Instead I opted to cut through the open forest and use tracks. This technique has worked well for me in the past. With only 2 slips in the race, I was very pleased with my time. Overall, the Spring Cup was extremely enjoyable and I’m looking forward to the relays tomorrow, when I will be pitted against a fellow CNOCer. While disappointed with my night-O result, I feel that I put it behind me well and produced a good classic race’.

Mark Stephens also had a great run in the H16 class. Mark ‘had a good run except for number 1, and found it slightly long. I went pretty fast at about 90% of my top speed around the course. The terrain was quite lumpy and slow in parts, with moss and sticks, but the green wasn’t very slow. The better option at times was to go around the paths. Overall, it was quite fast but the mistake on no. 1 cost me. I’m pleased with my result especially as it’s only my first year in H16. It was lots of fun, fast and good.’

Not to be outdone, team leader Ruth overcame an initial horrendous loss of time (5 minutes) to take VICTORY in D55A. Ruth “put the juniors out of my mind and concentrated on my own race. I was a bit disappointed after the night-O, but after an early wobble I got my head together and was very pleased with the win. Not all the juniors were happy with all their runs, but overall the team did very well.”

Teams for Spring Cup relay:
Junior team 1: Kevin O’Boyle, Mark Stephens, Sean Knight
Junior team 2: Colm Moran, Aine McCann, Conor Short
Junior team 3: Colm Hill, Ruth Lynam, Niamh O’Boyle
Night sprint event update
The juniors took to the forests of Valby Hegn late last night. The forests are fast and challenging even during the day, and no concession was made for the dark – courses were as technical as possible! Armed with powerful torches, the team took on the challenge admirably. There was a choice between running a night relay event or an individual event, and the Irish team chose the latter. This had the added benefit of being able to watch the start of the night relay. Sean Knight shares his thoughts: “the relay event mass start was overwhelming. In our race, map contact was essential, compared to the British night champs the terrain was much more varied and there wasn’t much to relocate off so you had to be really careful. I’m pleased with my result given the level of competition (the M18 runners were in with M20 and M21’s)”. Sean was the top Irish junior, followed by Conor, Niall and Colm. Kevin had the misfortune of punching the wrong last control – there were two last controls, one for the relay and one for the individual. In the D15-16, Aine finished 5th in an extremely close race. A mere 36 seconds separated 3rd place from 7th place. In Aine’s words: “The race was very good and much trickier than at home; it was as fast as during the day. Very pleased that I did so well”. Mark put in a consistent performance, with only one major error, in the H15-16 class. 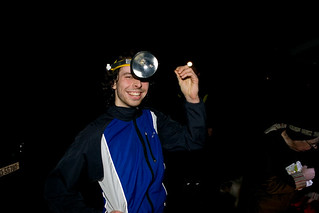