Another fine Championships run by a handful of dedicated Connacht orienteers saw Marcus Pinker (CorkO) stamp his authority in the Classic race on complex open moorland, with Niamh O’Boyle (CNOC) retaking the W21E title. A dead heat for 2nd in the Classic between Conor Short (CNOC) and Neil Dobbs (WATO) provided drama, while in the Relay Cork Orienteers took their 7th Women’s Relay gold, relegating the CNOC ladies team into 3rd place while the CNOC Men’s team regained the trophy for the 11th time (if you count their earlier incarnation of “Curragh Orienteers”).
In the Middle distance race former champion Una May (3ROC), having run a 5 km race that morning, claimed the W21Elite title with Conor Short taking the M21E.
These are the facts, but they don’t take into account the amount of work it needs to set up and run a national championships, from the selection of areas, getting landowners’ permission, mapping, planning, controlling and organising. The core of the organising team from Western eagles is only half a dozen or so, and the inclusion of the likes of Pat Healy as mapper (with Padraig Higgins) and general dogsbody swelled the numbers to perhaps ten. How many other, larger, clubs could unaided provide three days of excellent orienteering in remote areas? As a recognition of Frank Ryan’s contribution to orienteering over many years, he was presented with the Silva Award by IOA Chairman Mary O’Connell at the Relay prizegiving on Monday.
The terrain was largely boulder-strewn open mountain with some tricky young forest but the difference between this terrain and, say, west Cork, is that it was more runnable,less hilly and more technical. The Leinster equivalent would be either much steeper or covered in high heather, or both; the Munster version might be bedevilled by large tussocks of grass and uncrossable marshes.
Organisationally, having to bus the runners in and out from Glengowla Mines near Oughterard, was a necessary evil given the absence of parking in the competition area. The ride to and from the assembly area was an interesting one (interesting in the sense of the closing minutes of the original “Italian Job” movie where the bus teetered on the edge of a precipice with the gold sliding perilously close to the open door …). However, in this case the gold went to the deserving winners.
Excitement was never far away in the relays on Monday, either: despite a small entry in some classes, the races were hotly contested, with only seconds separating the teams in Handicap 6 class (Setanta edging out 3ROC and Cork) and Handicap 12 (Ajax edging out Fingal). In the Women’s Premier, CorkO (Sharon Lucey, Ailbhe Creedon and Niamh Corbett) gained 5 minutes on LVO on the final leg, putting them a minute in front at the line and taking their first Women’s title since 2008. CNOC (Conor Short, Kevin O’Boyle and Ruairi Short) in the Open class had a more comfortable 14-minute win over last year’s winners, CorkO.
The drama reached its height, however, in the final moments of the Junior 48-  race, with 3ROC M12 Aidan McCullough outsprinting Ajax anchor-man Oisin Wickham only to be obstructed on the line by a race official, so a dead heat was declared.
Weatherwise, while the rest of the country basked in spring sunshine, the cloud, rain and wind visited the orienteers, particularly during Saturday’s Middle Distance race. The organisers had thoughtfully provided tents to shelter the waiting runners, mindful of the conditions that prevailed in Donegal during the last Connacht-run IOC in 2009, but we can’t blame the organisers for the weather.
In a busy weekend, there was a fund-raising table quiz on Saturday evening and the IOA AGM was squeezed into Sunday evening after the prizegiving (there’ll be a separate report on the AGM soon).
No TIO report on an IOC would be complete without a bit of cuckoo-spotting and, yes, there was one in the early morning where I stayed, but not in the competition area.
Pat Healy and Val Jones took photographs of the events and the results breakdown and Routegadget are all on the IOA web site here.
This is a rather brief report which may evolve over the coming days, so keep watching this space! 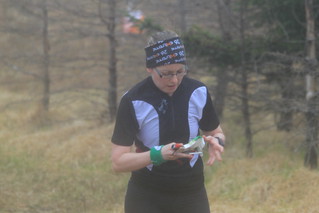