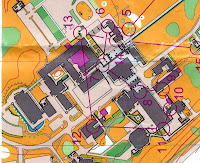 Lagan Valley Orienteers and North West Orienteering Club combined to give us three days of varied and exciting orienteering on April 23rd to 25th,
In Friday evening’s Sprint race at the Coleraine university campus, Nick Simonin (Bishopstown OC) took the men’s title, while LVO’s Susan Lambe took the ladies’ race, benefitting from a mispunch from leader Niamh O’Boyle. In Saturday’s individual race on the sand dunes of Magilligan, Niamh regained her Irish title and Bishopstown’s Nick Simonin took his first Men’s title. Nick cleaned up by taking the Mactíre Trophy award for competition performance in Sweden at the IOA AGM on Saturday evening.
CNOC took both the Premier and the Women’s relay title on Sunday, on the faster area behind the dunes at Magilligan.

The sprint, a dry-run for next year’s JK sprint at Stranmillis in Belfast, was a disorienting experience. The start was in a gym, with runners emerging, blinking, into the daylight in a small courtyard, with first controls within seconds of the start. The nearest thing I can compare it to is the sensation of going to the cinema in daylight and emerging in the dark through a different door. Runners were everywhere, like a leprechaun hunt, peering into corners looking down stairs, searching for the elusive markers. SportIdent timing allows planners to make courses criss-cross and zig-zag in a small area, and planner Igor Stefko took full advantage of this, using only a small part of the campus. Different levels, flights of steps and underpasses all added to the complexity of the challenge. The most talked-about leg, shared by many courses, involved a run through a large passage under one of the buildings (see leg 6-7 on the map). Routegadget and sprint results are here.

Saturday saw the emphasis shift to the complex open dunes of Magilligan, previously used for a British Championships, Home Internationals and NI Championships. Steven Linton’s courses used the dunes near the sea and the flatter areas inland. Areas of scrubby vegetation and fences simplified the navigation but at the end of the day, it was all down to reading the contours. Running conditions were ideal – cool and breezy but warming up in the dunes. Results and routegadget are here.

On Saturday evening at Limvady, the IOA AGM took place, followed by a quiz which raised €750 for the Irish Junior Squad.

Overnight rain had largely cleared for Sunday morning when we returned to Magilligan. This time we were on the Drummans, flat farmland with some more contoured areas, where very fast times would be recorded. The navigation was much less complex than the day before, but the increased speed still meant the mistakes were possible. In the Premier class, Cork O had a lead of 24 seconds from CNOC after leg one, which they had stretched to 54 seconds after leg two, but CNOC’s Colm Hill, with a shorter gaffle than Cork’s Bill Edwards, slipped in with a lead of 86 seconds to take the title. 3ROC took third spot, almost three minutes further adrift. CNOC also had a successful outing in the Women’s race, with Niamh O’Boyle, Orla Jennings and Ruth Lynam in the clear from Queen’s University all the way round: but isn’t it great to see QUBOC back in action again?
The volcanic ash from Iceland had dissipated so most travel plans were unaffected. It did, however, feature in the Juniors’ quiz, with extra marks for anyone who could spell Eyjafjallajökull. (There is an interesting parallel with a previous Irish Championships in Northern Ireland – on Saturday, April 26th 1986 a nuclear reactor at Chernobyl exploded – the day of the Individual Championships at Slieve Croob).

If you are wondering how the Irish Championships were in Ulster, a week before the usual date, and with a sprint race rather than a middle, here’s the story: there is a rota between the four provinces to run IOC and normally Leinster would have run the 2010 event and Ulster the 2011, but the JK is coming to Northern Ireland in 2011 and it wouldn’t be possible to run both IOC and JK, so there was a swap and IOC2011 will be in Leinster. The reason the Irish Championships were a week before their normal date on the May Bank Holiday weekend is to avoid a clash with the British Championships. And finally, there was an agreement between IOA and NIOA that IOC organisers would run the two core events (individual and relay) with a third event which could be middle distance or sprint. Last year we had middle distance in Donegal (with a sprint championships at Ross Castle, Killarney, on the eve of the Shamock O-Ringen) and this year we had a sprint. The missing event is on offer to organisers of regional championships or other similar events to make a bid to run it – so far I’m not aware of any takers for the 2010 Middle Distance race.

3ROC are running the Leinster Championships as a stand-alone event in Carlingford, Co. Louth on Sunday 9th May. Entries have closed but there may be some maps and start times available still – contact leinster2010@gmail.com to enquire. There is entry on the day to yellow, orange and light green colour courses, but allow for a 30-40 minute walk from parking/assembly in Carlingford village to the start/finish area. Details, start lists etc will be on the LOC web page here.
Don’t forget the NI Series race at Slievenagore on Saturday 8th and the Micro-O event at Kilbroney Park, Rostrevor that evening tio raise money for the Irish team travelling to the World Championships in Norway. Details here.

As mentioned above, the 2011 Jan Kjellstrom International Festival of Orienteering (you can see why it’s just called the “JK”!) is coming to Northern Ireland. Plans arae already well advanced and the event web site is open here. Visit the site and keep in touch

The Annual General Meeting of the IOA took place in Limavady on Saturday 24th April. An uncontroversial event, it saw only one change in the Executive Committee, with Sarah Ní Ruairc (Fingal) taking over the Treasurership from Mary O’Connell (3ROC). Brendan O’Brien, Chairman, gave a wide-ranging overview of the state of the Association, highlighting the developments in Elite and Junior competition, technology, mapping, and schools orienteering. These areas were expanded on by the officers of the executive and the full reports will be on the IOA web site.
Annual Awards
The annual awards at the IOA AGM were announced: the Mactíre Trophy was given to Nick Simonin; the Silva Trophy to Pat Healy and the Silva Award to Marcus Geoghegan. Full detils and nominationa can be seen here.
May highlights
After the Irish Championships the main competition season is winding down, but May still promises the Leinster Championships at Carlingford on the 9th and two interesting events on Saturday 8th (see above).. At a more local level, the Cork Summer League (Sundays, next event Curragh Wood on the 9th), the Cork Inter-Firm league (Tuesday evenings starting at Farran on the 11th), the Tara Sprint Series (Sunday 16th at Tara and 23rd at Ardgillan) and the CNOC Summer Series (Tuesday evenings: starting at Donadea on the 18th) are all starting.
May 21st is the closing date for the Donegal 3-Day on the June Bank Holiday weekend at Lough Eske (scene of IOC 2009). Details here. Enter online here.
And there are the evening hill races, including a 30th Anniversary race on Three Rock Mountain, believed to be the first organised hill/fell/mountain race on Saturday May 22nd. Details here. The organisers hope to see lots of orienteers there, since we have always featured in the mountain races.

That’s all for now!