Annual General Meetings are rarely the most exciting events and this year’s IOA AGM was no exception. The AGM is an important point in the year of the Association, where the Executive Committee are called to account for their stewardship of the sport over the past year and where policies are laid down for the year to come, office holders elected and awards distributed. This year’s AGM, on the Sunday evening of the irish Championships, was squeezed in after a good meal and a long prizegiving, and was a rather rushed affair, starting just before 9 pm at The Boat Inn in Oughterard. This was hardly the optimal arrangement for the serious business of an AGM, with people wanting to socialise or go home, nevertheless the business of the meeting was transacted smoothly.

Chairman Mary O’Connell welcomed everyone and ran through the activities of the past year – her full report and those of many of the other officers – are on the IOA web site here. Did you know, for example, that there were 144 registered IOA events in 2012 with 14300 starts and 2500 competitors? Mary highlighted the work in developing orienteering in schools and scout groups and the availability of the 17 permanent courses around the country. Orienteering is on the primary school curriculum and this provides further opportunities for development. She thanked the Executive Committee, the Child Protection Officer Barbara Foley-Fisher, and particularly thanked Brendan O’Brien for his work on IOA, as Chairman and as Elite officer. She also thanked, among others, Juniors Officers Ruth Lynam (outgoing) and Mike Long (current) for their work.
Treasurer Sarah Ní Ruairc presented the audited accounts for 2012, reporting a deficit of more than €11000, much of which was spent on the “Ten Elements of Orienteering” videos which Finn van Gelderen showed at a later stage in the meeting. Income in 2012 was €67000 of which €47000 came from the Government grant. IOA spent €15000 on high performance orienteering and €12000 on Juniors in 2012 (all figures rounded up/down). Our grant in 2013 is expected to be less than in 2012.
Juniors officer Mike Long reported on four junior training weekends during the year, plus teams running in Junior Home Internationals, European Youth Champs and Junior World Champs as well as a junior tour to the Welsh 6-Day last August. He was encouraged by the fact that 9 of the 24 on the JHI team were first-timers: a good omen for the future. This year’s EYOC will be in Portugal and JWOC in the Czech Republic. One issue which was raised by several of the officers was the new requirements for Garda vetting of anyone dealing with juniors or vulnerable adults, and Mike has circulated vetting forms to be completed and returned to Barbara Foley-Fisher.
Communications officer Finn van Gelderen showed several of his “Ten Elements” videos and outlined some of his other corporate identity projects like car stickers and new kit for the World Championships team, and mentioned that the next CompassSport magazine will have an article on orienteering in Ireland. He also revealed that the new style IOA web site is here to stay (which is fine as long as the old one co-exists with it, as far as I’m concerned: thanks to those of you who agreed with me and are keen to keep the old format).
Development Officer Andrew Cox reported on schools orienteering (24 IOA-sanctioned schools events in 2012) and emphasised that for schools (particularly Primary schools) the maps must be close by. There will be a Schools orienteering meeting on June 9th at Kilcoran Lodge Hotel near Cahir, Co.Tipperary and all interested people are invited.
Ed Niland reported on orienteering education and Harold White on technical matters: new mapping registration rules and new event registration regulations are being introduced, to be followed by the general rules, protests and colour events. Consultation is still possible on the event registration issue but the die has been cast in relation to the mapping register.
Mapping Officer Brian Power mentioned that there are over 700 known orienteering maps in the country and asked clubs to try to resolve any disputes about mapping rights amicably. It was suggested that a previous mapping officer has a copy of the long-lost IOA mapping register and it would seem to make sense to use this as a starting point in relation to map registration rather than having to start from scratch.
Fixtures Officer Fergal Buckley told the meeting about the new event registration scheme where the season will run from 1st August to 31 July and that June will be the month for event registrations. The proposals for event registration are on the IOA web site.

Other officers’ reports were circulated (Darren Burke’s on High Performance and Bernard Creedon’s on anti-doping policy spring to mind) and these will be on the IOA web site for you to read in detail.

The elections which followed were uncontentious, with most of the officers prepared to go forward for another year. There are vacancies for Mapping Officer, however, and for Secretary.

Following the elections, the presentation of awards to those chosen by IOA took place: the Mactire Trophy to Conor Short for his performance in JWOC 2012; the Silva Trophy to Frank Ryan for years of dedicated service to orienteering in Connacht and nationwide; thew Silva Award to Pat O’Connor for similar work in Munster and particularly for involving scouts in orienteering; and the “Spirit of Orienteering” award to Ruth Lynam.

Two special awards were presented for the orienteers who ran in the most events in 2012, and they went to Paul Smyth (AJAX) with more than 41, and the ladies went to Eadaoin McCavana (GEN).

The only impassioned plea of the night came with Josh O’Sullivan-Hourihan’s request to use the correct overprinting colours for courses so that colour-blind orienteers like himself can see the course on the map. Evidently one needs to tweak the OCAD colour palette so the overprint colour settings are 100 magenta and 30 cyan, because the OCAD colour called “purple” is actually red.

So: a businesslike but uncontroversial AGM. I have been at AGM’s in small halls after Connacht, Championships, at Irish Championships, in schools in Dublin and in even EGM’s in forest car parks, and there is no ideal time or place, but I would have to say that trying to squeeze a meal, two prizegivings and an AGM into one evening is not a recipe for success.

On a personal note, I would have to thank the entire IOA for their work in keeping the sport going from year to year. Orienteering is a minority sport among minority sports, with an aging and possibly dwindling population, and we will struggle to survive and to regain the critical mass we need to survive through natural wastage, but it’s such a fantastic sport that we have to keep chipping away at it. 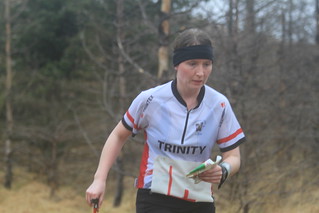