This weekend’s event has arguably the highest quality field Irish orienteering has seen since the 2014 Irish Championships.

Dublin University Orienteers (DUO) from Trinity will be slight favourites for the Men’s title over rivals University College Dublin Orienteers (UCDO). Whereas in the womens, it looks set to be a tight battle between DUO, UCDO, and Queens from Belfast as well.

DUO currently hold both trophies, and last year dominated the intervarsity orienteering championships. They will look to retain both trophies, a feat which I am not sure has ever been achieved before.

In the Men’s A class DUO are expected to field a strong team including Irish WOC runner, and current intervarsity champion Conor Short, and JWOC runner Eoin McCullough, alongside Kevin O’Boyle and Kyle Heron. UCDO have similarly strong depth with Colm Moran, Cillín Corbett, Laurence Quinn, as well as Jonathan Quinn and Niall McCarthy who make their debut intervarsity appearances. The Queens team including JWOC runner Mark Stephens, and spaniard Mario Nogales should not be ruled out either. Individually, nearly all of these runners are capable of taking back the Gold medal, so predicting how this one plays out will be a tough ask.

In the Women’s A class DUO are expected to be lead by SHI runner Clíona McCullough, with experienced navigators in tow. Queens University Belfast have shown clear development of their squad, and lead by SHI runner Eibhlin Largey, and experienced orienteer Katarina Stefko will surely fancy themselves for a shot at gold as well. The final team rated with a chance at that prized trophy is UCDO, who expected to be represented by a team of debutantes, but including SHI runners Róisín Long, and Niamh Corbett.
Once again, a field of home international runners means the Women’s individual title could go one of many ways.

Certainly this is the strongest field the Irish intervarsity competition has ever seen, and we look forward to a great weekend of racing and dramatics. Good luck to all racing over the weekend.

For more info, and results when they come, got to: http://www.niorienteering.org.uk/ 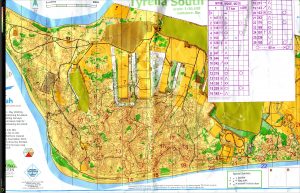