A weekend in January saw the culmination of months of planning for David Healy and his team. The brain child of David, Glendalough training camp drew on David's own experiences of orienteering training camps he had attended in Sweden over the years. David's mantra- We are stronger together- brought to the fore by inviting not just his own club of GEN, Great Eastern Navigators, but members from clubs across the country, North and South.

Friday evening saw everyone arrive and the car park slowly overflowing, we were greeted by Brenda who had organised the sleeping arrangements for everyone, an enormous task in itself, she had also prepared an evening meal for all! We were given an introduction by Mary O'Connell, Chairperson of the IOA followed by talks and a series of inspiring video presentations. There were a few worried faces as some newcomers were blinded by the orienteering jargon and the thoughts of running through knee deep heather. David soon put minds at ease as he assured we would all be within a small, easily accessible area. A handy guide to orienteering was also distributed by the education team, with some tips and tricks as well as jargon translations for the uninitiated.

Saturday was Training Day, everyone was divided firstly into, Mountain, under the leadership of Ruaírí Short or Forest under the leadership of Niamh Corbett (both International Orienteeers) and subsequently into smaller groups. Each group, had a range of participants in age and experience and were introduced to their trainers for the day.

The Mountain base on Brockagh and the Forest base in Glenmacnass. David had meticulously planned a variety of training exercises for both areas giving care and thought for every level of experience.

As we headed to the training areas we thanked the Weather Gods who had looked kindly upon us with stunning weather, just the right amount of give underfoot, semi frozen bogs, sun and no wind, we couldn't have asked for more in January!

Once at the training areas the group leaders delighted us with a variety of exercises; on the mountain there was Control Picking, Contour only, Corridor map and a short course concentrating on Compass work. In the forest there were excercises to improve confidence teaching compass work and route choice, together with fun team games to add to the excitement.

The Day culminated with another wonderful meal from Brenda's team in the kitchen with everyone volunteering on clean up and wash up, followed by a series of workshops.

There was Niamh Corbett (aka Forest Lord) giving an insight into her recent World Orienteering Championships Long Distance race in Norway last summer. The pressures of race day, making decisions and committing to them during the long race were touched upon as well as the training required for such competition. There were many pertinent questions posed from the older juniors in the audience, looking forward to the day they may have the opportunity to run as a senior in the Irish colours.

Colleen Robinson (aka Junior Representative Orienteering) held a stretching and balance class, giving advice and examples of excercise and stretch that are particularly relevant to orienteers. Colleen sees balance and core strength as integral in the optimum orienteering body! The quick reaction needed to uneven terrain underfoot and vegetation surrounding the orienteer require an overall strength from head to toe, rarely needed in other sports. Colleen, a trained physical therapist runs a workshop in Dublin each week aimed at orienteers and hillrunners.

David Healy held a workshop preparing the orienteers for Sunday's exercise- putting the training into practice. Maps of the courses set for Sunday's training were given out and we were asked to plan, visualise and artistically drawing our route. David and his trainers were on hand to help out giving guidance to all.

To top the evening of activity off there was a Micro Night O planned by Johnnie Quinn, having the competitors whizzing around the grounds of the Hostel by torchlight, punching and mispunching to their hearts delight! Great Fun and for many; their first step into the realm of Night Orienteering.

On Sunday the hostel emptied as the mountain and forest car parks filled. Here we were to put into practice the skills and tips we had gathered over the weekend. Once again the weather was perfect as were the courses and planning. On the mountain there was a compulsory warm up as we headed cross country to the start where Gina awaited with her clipboard and start box! There were just two courses on the mountain but with a variety of abilities the competitors soon spread out across the terrain searching high and low, accurately attacking each control with precision!

Sadly the weekend came to an end and everyone headed home. It was great to see so many travelling from far and wide, Kerry and Northern Ireland as well as West Cork and the wider Leinster region. Finally I can only say an enormous thank you to the orienteering community under the leadership and vision of David Healy who made this happen. Notably many of those young orienteers who helped out and organised the Dublin Sprint Weekend in the autumn of 2019 were on hand giving tuition and guidance. We thank you all and may the spirit of volunteering live on.

The Forest team had equally well planned courses and there were many smiling faces as they finished, feeling confident with the new found skills in familiar terrain.

Many thanks to all those who provided photos of the weekend. Above are a selection from Conall Whelan, Eileen Young, Deborah Whelan, Josh O'Sullivan Hourihan and Niamh Corbett.

More photos will be uploaded and shared here when my internet improves! 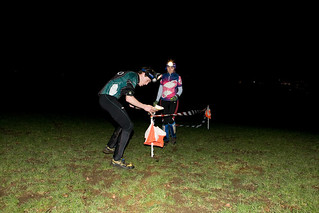