The final countdown to the 2011 Irish Championships is on. Last weekend’s JK in Northern Ireland will be a hard act to follow, but Ajax’s Irish Championships this weekend will be the biggest IOC for some years, maybe the biggest ever: more than 500 competitors have entered, many of them having stayed on for the week after the JK. The entry from Ireland stands at about 275 with visitors making up the balance.
The Middle Distance and Relay events will feature the open mountain with turf cuttings terrain on the spine of the Dublin/Wicklow border between Glencullen and Glencree, similar to the area mapped by Marcus Pinker at Raven’s Rock/Prince William’s Seat used for a Leinster Championships some years ago. Competitors at Sunday’s Classic event at Brockagh, near Laragh, will have the runnable boulder-strewn slopes of Brockagh and the marshy ground and more complex contours and crags of Mall Hill to contend with.
The visitors are particularly prevalent in the older age classes – imagine 29 M65’s in an Irish Champs!. However, the entry of 46 in M21E and 20 in W21E will make sure that there is hot competition at the top end too. Will Nick Simonin retain his title, or will one of the locals like Shea O’Boyle win the men’s race? Will Niamh O’Boyle, who has had some injury problems in the past year, retain her title?
In the Relays, will 3ROC take the elusive men’s title after finishing top Irish team at the JK? Will CNOC retain the Women’s title?
In addition to the main events, Ajax’s event centre at Kippure Estate, west of the Sally Gap, will feature a Mini-O event run by Colm Hill as a fundraiser for the Junior Team on Saturday evening and will also host the IOA Annual General Meeting on Sunday evening.
Full details and startlists are here.
Remember that parking at the events is limited, so try to share transport as much as possible. 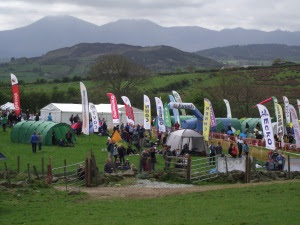 Marcus Geoghegan said it all, in his brief note about the event in the Irish Orienteering E-Group today:
“The eGroup has been very quiet about this, but that’s probably because everyone is still stunned by the amazing achievement of the Northern Irish clubs last weekend in running the JK.
The events were fantastic, challenging, orienteering. The organisation was impeccable. It was a triumph, no other way to describe it. I don’t know how they managed to do it, but I for one want to publically say well done. I’m already eagerly anticipating the combined World Champs and Northern Ireland 6-day in a few years’ time.”
I would have to agree with Marcus’s assessment of the event. To attract more than 2000 orienteers to Northern ireland was some feat, many of them never having orienteered here, or even set foot in Ireland before, but to run four such excellent events with such panache and style really was an extraordinary achievement – as if the organisers had been doing it all their lives.
In addition to the fantastic sprint race which kick-started the weekend at Stranmillis College in Belfast, the Individual events on the dunes of Tyrella and the slopes of Slieve Croob, and the relays at Tyrella, continued to impress the competitors with their courses and organisational quality. On top of that, throw in a QUBOC prologue sprint in Queen’s University and Belfast’s Botanic Gardens, Trail orienteering at Castlewellan and Murlough, TempO at Stranmillis, a micr-O maze and three outstanding string courses for the junior juniors, a table quiz for the Irish juniors, the BOF AGM, and a concert and social in Newcastle, and it made up quite a weekend.
As someone who was involved in a peripheral way in some of the organisation, I could see the amount of planning and thought that went in to every aspect of the event, from terrain selection through bussing competitors, to mapping, to music, to volunteers and equipment, from crisis to crisis, and the degree of cooperation between all the organising clubs (spearheaded by LVO) showed total commitment to the JK as a showcase for orienteering and for Northern Ireland.
There were very many obstacles to be overcome along that way and the organising team was very fortunate to be able to draw on the talents of organisers like Colin Henderson, planners like Bill Simpson, Igor Stefko, Wilbert Hollinger, Greg McCann and Philip Baxter, and many others, all shepherded along by the unflappable Harold White. Several retired orienteers came to see the Festival in full swing or help at the events, and it was great to see the elder statesmen of Irish orienteering like  Ernie Wilson meeting Seán Rothery and Wilbert Hollimger, or Freddie McCann back to help at the Relays.
The competitors’ comments were very positive: “A great JK”, “One of the best I have been to”, “Fantastic orienteering”, and no doubt the plaudits will continue to come in.
So: Hats off to NIOA for staging a really outstanding JK! You can read more about it, with results and reviews, on Nope Sport here, on the BOF web site here, and the full results are on the JK2011 web sitehere.
The JK Trophy was won by Scotland’s Interlopers, with the British Army team taking the women’s relay title.
Read about the Sprint here, Day 2 at Tyrella here, Day 3 at Slieve Croob here and the Relays here.
Next year’s JK will be in Scotland on April 6-9 2012, largely in Perthshire.
There is no truth in the rumour that, since  Jan Kjellstrom Orienteering Festival over the Easter weekend in Belfast and Co. Down was such a success, the name of the event will be changed to the Seán McEllistrim O-festival …

Some of the Irish highlights of the results were:

The sprint event on Friday saw a very tough challenge through the buildings of Queens and Stranmillis college. The top 3 Irish Men and Women were:

Saturday brought the extra challenge of Sunny conditions and the intricate contour detail of Tyrella sand dunes. Top Irish were:

There were many other solid performances by the Irish seniors. Overall results were very pleasing and provide evidence of real progress in the build up to the summers major competitions.

Did anyone hear or see the cuckoos at Tyrella at the weekend? They were in good voice at the western end of the area for the relays.
Competitors were probably unaware of some last-minute changes to courses at Slieve Croob: on the Wednesday before the event access was lost to part of the area and three courses had to be replanned, controlled, and new sites selected, maps reprinted and bagged and control descriptions prepared in time for Sunday … this was on top of losing the only patch forest in the whole JK weekend across the road from the Slieve Croob starts because of breeding birds.