After the midwinter layoff and the snows, it’s good to get back to some orienteering. The spring league events are starting up and in Leinster, the Dublin By Night league is coming to an end.
Looking at the messages in the Irish orienteering e-group and elsewhere on the IOA web site, there are some interesting plans and ideas out there. David Healy is trying to put together a team for the 100 km overnight relay, the Tio Mila, in Sweden at the beginning of May; the Irish Juniors are on tour next week to the Portugal O-Meet; Marcus Geoghegan has scored people running in the Saturday night/Sunday morning races in Dublin; the JK closing date is approaching; the Leinster Championships date has been confirmed for 9th May at Carlingford (online entries opening soon); there’s a downhill race at Trooperstown, Co. Wicklow on 21st February; the Irish and Northern Irish Trail Orienteering Championships have been announced for the 17th/18th April, the week before the Irish Championships; the Northern Ireland Championships departs from its usual September slot and will be on Saturday 19th June. There is also a range of both Primary and Secondary schools events and Championships in the spring – details on the IOA web site.

Elsewhere, the Welsh Championships will be on over two days on 6th/7th March near Aberystwyth, closing date 20th February: reasonably accessible from Holyhead or Pembroke. Details here.

Browsing idly around the internet, I came up with a couple of things which might amuse you: one was a description of the prizes at the 2009 Polish Orienteering Championships – you won’t believe it! read about them here; another was the Ultimate String Course in the USA where World Champion Daniel Hubmann (Switzerland) took on all comers in this gruelling discipline and came in to win in a time of 49 seconds at his 5th attempt! Read about it here.

While looking for something else, I also came up with this article from a few years ago from Finland, about Irish ski-orienteer Rory Morrish. Rory comes from a well known O-family in Cork and has been living in Scandinavia for some years. Apparently he missed the start for a couple of ski-O races and this is what the paper had to say …

To prove that TIO has a wide focus and to broaden your cultural horizons, here’s an orienteering Limerick in Norwegian – don’t ask what it means, but it’s about ski-O:
Ei snuppe som oftes er blid,
Fikk orientering og ski til å gli,
Fem sekunder totalt,
Det er slett ikke galt,
Hun kan si “det driter jeg i”.
One interesting armchair project is “101 orienteering maps you should run on before you die”. Jan Kocbach of “World of O” web site is encouraging people to vote on the best areas aropund the world. Will any Irish maps feature? Read about it here. Not unlike this is the CompassSport 99, a list of the best orienteering areas in every county in the UK, though some like the Shetlands have none as yet. Several areas in Northern Ireland feature. Which areas would you list as the best from the island of Ireland? Inch, Curracloe, Mullaghmeen, Knockbarron, Glendalough, Killary, Inishbofin, most of West Cork … In fact, one thing we have plenty of maps of is sand dune areas: Bull Island, Curracloe, Kilmore Quay, Tramore, Roscarbery, Rossbeigh, Inch, Castlegregory, Banna, Fanore, Mullaghmore, Finner, Portstewart, Magilligan, Tyrella, Portmarnock (until it became a golf course) … there musrt be more, but I’d need to look at a map to remember them. We do have a great variety of terrain here, and there are even a few forested areas left! 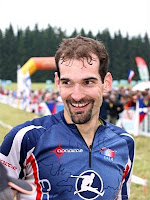 Gueorgiou, Nordberg and Smola awarded International Fair Play Diploma of Honour
The athletes Thierry Gueorgiou (FRA), Anders Nordberg (NOR) and Michal Smola (CZE) will be recognised by the International Committee for Fair Play for their sportsmanship during the World Orienteering Championships relay in Hungary in 2009. The three athletes were fighting for the gold medal on the last leg in the World Championships relay, but sacrificed their own and their nation’s medal possibilities when stopping to assist an injured fellow competitor. The Award Ceremony, where the prize-winners receive their trophies and diplomas, will be held under the auspices of the City of Pécs, European Capital of Culture in 2010 and the International Committee for Fair Play, in the course of a gala dinner in Pécs, Hungary Saturday 27 March 2010. Gueorgiou, Nordberg and Smola will receive the Fair Play Diploma in the category Act of Fair Play.

Note: The award is for Thierry Gueorgiou, not his countryman Thierry Henry!