This year’s event was in Grodno in Belarus (that’s between Poland, Lithuania, Russia and Ukraine, to save you looking it up!) at the end of June. The competition consists of three races – Long, Relay and Sprint which, this year, were in that order. Grodno is no stranger to running multi-day orienteering events, as they often run 3-day events there, mainly attended by Belorussians rather than foreigners.

All of the athletes had run for Ireland before at Junior Home Internationals while all except Darragh, Eoghan and Meadow had also run at EYOC. However, every year is different and while having previous experience of features like quarantine, unusual accommodation, local diets and event transport is helpful, when you’re in the forest, every year is different. Having said that, it’s just another run on a map!

Belarus is not a prime tourist destination. In fact it’s quite difficult to get there (we flew to Warsaw and continued by bus to Grodno), and a journey roughly equal in distance to Dublin to Cork took more than 6 hours, including 2 hours to cross the border from Poland to Belarus.

The team travelled on Tuesday so we had Wednesday to do some light training in a forest in the morning, with sprint training in the town of Grodno in the afternoon. Temperatures were touching 30C but there was a promise of low 20’s by the end of the week when the EYOC races would start.

The forest was a revelation: quite slow running, with low visibility due to head-high undergrowth, very vague vegetation changes, few point features, almost no rock, few tracks, vague contours and areas of World War II trenches and tank traps. In fact, very difficult navigation and extremely difficult to relocate if things went wrong. By coincidence, we would be back in the same area the next day for the model event, so we knew what was in store for the Long and Relay races.

Our Sprint training map was in part of the town beside the embargoed (prohibited) area so we walked around and looked at the kind of features which were mapped and the kind of legs the planner might set up. What does an uncrossable hedge look like? Is this wall on the map? Are you allowed to cross this stream? Again, the heat was intense so it was just a familiarisation walk, but very worthwhile.

On Thursday we had a model event for the sprint, with a scattering of controls in a small area, and a start and finish set up as a demonstration of the actual race arrangements. The map was simpler than the previous days (the individual lampposts and features like washing-line supports were gone) and it was easier to read. The area was flat so that hills and contours would not affect route choice, unlike some recent EYOC’s which included things like an old castle in a hill town with lots of steep climbs. Back in the forest we had another hour walking or jogging to get a feel for the mapper’s style. Again, lots of green on the map so low visibility and slow running. 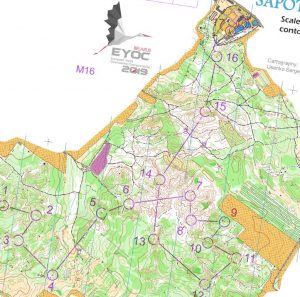 We had an early start on Friday for buses to the Long race. The runners went into quarantine at a school, where they had to wait until their start times. Quarantine means no communication with the outside world, so no phones, tablets etc: just read, relax, play cards, chat, sleep, do word puzzles, and once you leave you can’t go back in. An 11.00 am jog from pre-start to start was an additional warm-up and temperatures had dropped to mid 20’s. The forest was very like the training area, with only a small section shown as runnable (white) towards the end of the courses. The planner used this small area to the full, with several controls before the final few legs to the finish.

As expected, the Scandinavians and Central Europeans dominated the competition, with the Czech Republic, Hungary and Finland prominent on the podium. The highest Irish placing was Clíodhna Donaghy, 68th in W18.

For some reason the official opening ceremony was on the evening after the Long race, with a parade, music and speeches in the main square of Grodno, and the prize giving for the Long race.

This year the Relay was on the second day (usually the order is Sprint – Long – Relay) in a forest very like the previous day, in other words low visibility and vague. We had teams in the M16, W18 and M18 classes, with one extra runner on a mixed team. This was actually handled very badly by the organisers: spare runners were made up into mixed teams with both boys and girls or different countries on the same team. Some complete teams of three were made up but there were 22 incomplete teams with 1 or 2 runners, which was bad for the athletes who have come to run in EYOC and deserved a proper relay run. An arena run-through gave the spectators an opportunity to cheer on our runners with about 1 km to go. The team gave great support to one another all through the week, but particularly at the Relay. Our results were not up to the level we had anticipated but none of the teams were over time.

The evening of the Relay saw the Friendship Party, a big buffet and open-air disco in a kind of holiday camp outside Grodno. Despite two days’ running in the teams’ legs, there was no shortage of energy for jumping around and dancing! 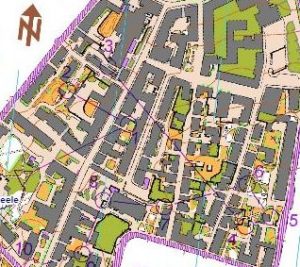 For the final day, Sunday, we were back in the centre of Grodno for the Sprint. Sprint races are planned for a winning time of 12-15 minutes, usually in an urban situation with lots of fast decision-making, plenty of route choice but not much complex navigation. Earlier maps of the competition area showed that it was neither complex nor steep, so speed would be the deciding factor. All the three events used SIAC contactless SI punching so it should be possible to maintain flow through the controls without stopping – particularly important in the sprint. When we arrived at quarantine we realised that we were on the sprint training map we had used a few days before, although we were still only on the edge of the competition area.

From quarantine, the runners crossed a long pedestrian bridge and up a slope to the start about 350 metres away. As it turned out, the arena and finish were in the main square by the stage where the opening ceremony had been on Friday. Conditions again were warm and sunny, with running shoes rather than O-shoes recommended.

Reflecting on the results

The same countries dominated the results, minus Finland – Gold going to the Czech Republic, Denmark, Germany and Poland. Amazingly, Israel’s Matan Ivri scored a 6th place in M18, only 16 seconds off the leader. I think that Sprint is where we in Ireland have the best opportunity of doing well internationally at every level, but it will require us to up our fitness and running speeds. This year our best placing was Liam Cotter’s 80th in M16. Just to give an idea of how competitive it is, in M16 there were 39 finishers within 60 seconds of the winner.

From the split times it looks like everyone on the team had at least one bad control on each of the forest days, so the question is how to maintain concentration throughout the course. In low visibility forest, slow and steady, focusing on not losing track of where you are, is the way to go.

Route choice started at the stage of planning the trip: as you can’t get there directly from Ireland, do you fly to Poland or Lithuania and travel on from there? We opted for Poland, as the flights to Lithuania all arrived late at night.

It worked fine, as the organisers laid on bus transport from Warsaw to Grodno (Air conditioning? Just sit closer to the window!) The bus drivers either wore a seat belt or had a rosary beads hanging from the rear view mirror – the passengers had to look out for themselves!

On the way back we spent a night in an unusual hostel in the Old Town in Warsaw, but then had an unexpected extra night there as our flight was cancelled at short notice when we were actually at the airport, because of thunderstorms.

So, what about Belarus anyway? It’s a landlocked country, over 40% forested, and the highest point is 345m, about 1100 feet. The population is about 9.5 million and the area is about three times the size of the island of Ireland. The main city is Minsk, but where we were was in the north west, about 20km from the Polish border. It’s a “unitary presidential republic” so in practice is ruled by the President, Alexander Lukashenko. Belarus is not noted for press freedom or freedom of speech and is the only European country still using capital punishment, so I’d better not say anything more about it …

Lessons learned: bring additional food with you; don’t expect your O-shoes to be handed in as lost property if you leave them behind; drink plenty of water (bottled, not tap water – it’s downwind of Chernobyl and 70% of the radiation from there ended up in Belarus); leave plenty of time for border crossings; go to a training camp or previous event there if you want to prepare for a big competition later, and don’t expect the same standards of catering, comfort, accommodation or infrastructure that you’d have at home. After all, isn’t that what makes life interesting? You don’t want everywhere to be the same as home!

You can visit the EYOC website here  to read about the events and see the full results.

EYOC 2020 is in Salgótarján in northern Hungary, from the 19th to 22nd June, which is quite early for anyone doing school exams. Even as it is, the dates of EYOC are not great as several people on the team will have spent the previous few weeks either doing exams or in some other situation (like Irish college) where training opportunities are poor to nil.

The team were great ambassadors for Irish orienteering and gave one another great support, so thanks to everyone for their hard work.

Many thanks to John McCullough team leader and Vice Chair of Irish Orienteering Association for giving his insight into the EYOC trip.

Thanks also to to all the team leaders, selectors, parents and athletes for their work before, during and following the trip.