EYOC 2014 was characterised for me by high quality orienteering great hospitality and a solid performance by the Irish team. EYOC was held in and around Strumica in south-east Macedonian in late June and comprised the usual format of sprint, long and relay with no qualification races unlike JWOC. The Irish team comprised 3 W18’s, 3 M18’s and 2 M16’s together with 2 leaders.

We arrived on the Monday and spent the Tue and Wed training and trying out the model sprint and long courses. The long area was generally unspoilt white forest but was very steep – hands and knees stuff in places. We quickly figured out why the courses seemed short but the proposed winning times were as normal. The sprint model and training were relatively straightforward and were not indicative of what was to come. We could see that the area was on the town square and that there would be a long run in along the Grafton St of Strumica.

The sprint held in temperatures of 29 deg. was a surprise. It consisted of a first section on steep old streets with many steps, then through the arena and a spectator control and into a completely different section zig zagging across the main stress. Ruth had warned that “after the spectator control think of the race as a completely new one” and she was correct. Our general aim in EYOC is to have some people in the top 40, which is a good result, and Roisín’s good race put her comfortably within this high goal, finishing in 33rd place. Paul also had a good race, coming 57th, just 2:16mins down on the winner, as well as solid runs from the rest of the team too.

We had wondered why a small country like Macedonia (population 2 million) which has a low orienteering profile took on EYOC. The reason for this was clear following the spectacular opening ceremony, with local musicians, dancers, fireworks etc. Macedonia was very keen to put on a good show and to at least rival their near neighbour Bulgaria who host JWOC in July.

The long was held next day in the area adjacent to the model event so the terrain was as suspected. A surprise perhaps was the relatively low number of controls and some very long challenging legs which were very well planned. It looked like the path options were slow and a long way around but it seems some of the top performers chose these. Again we produced a series of solid performances as follows:

The banquet after the Long was well organised and was clearly a great party. None of the athletes were pleased when they were dragged off home at 10:30pm to be ready for the 6:00am start for the relay the following day.

Peter had hurt his ankle on the Long so James stepped into the M18 team leaving Robert to run with a fast Danish team. The relay was very spectator friendly and comprised of 3 loops with the spectator control being visited twice. It was perhaps the most detailed relay I have seen for some time with attention to small details vital and there were many mistakes made by all the teams. The British W18 Megan Carter – Davies had a great run on Leg 1 coming in 2nd. Caoimhe was not far behind her on the first loop but made a small mistake in a complicated green area on the 2nd loop. Róisín took it up and pulled back some places to leave Ireland in 20th a position which Aoife held on the last leg. The girls finished 20th of 29 teams which I think is relatively speaking their best performance of the last 3 years where we have had girls teams completing the relay at EYOC. 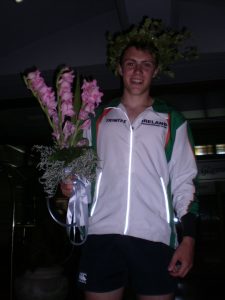 The boys were a little unfortunate as both Peter and Frazer made some small mistakes which resulted in James being sent out on the mass start. He came through the arena as the parallel Strumica Open event was starting and ended up not finishing as a result.

That evening the Swedish team organised a fun event in the grounds of our hotel on a 1:100 map drawn in about 10 minutes! sent out on the mass start. He came through the arena as the parallel Strumica Open event was starting and ended up not finishing as a result.

The Swedish coach suggested that while orienteering you should talk your way through the course, e.g. knoll coming up on my left, ground sloping away to the right, contours turning around etc. James was duly awarded the prize for the person who obeyed and talked most during his run.