Josefine Klintberg has been participating in a University exchange programme in Trinity College, Dublin for the past five months. She has thrown herself into the Irish orienteering community, participating in events almost every week and even giving a talk to our Junior Squad following the time trials in March.

I asked Josefine to give us a visitor’s insight into Irish orienteering.

In the beginning of January I packed my bags and left Sweden for 5 months of living and studying in Dublin. Many people have asked me why I chose to do my exchange in Ireland and even though English speaking country and good university was a priority for me, the decisive factor when I went through the list of possible exchange spots was the possibility to continue on running orienteering.

For someone as me (from Sweden), that’s used to snowy winters, and therefore mostly doing plain running during winter, its been amazing to live in Ireland. The possibility to go orienteering already in January feels like such a luxury. It was only 3 days after my plane landed in Dublin that I got to run the first night-O, a mass start in Phoenix Park, and after that it was some events almost every weekend and some trainings in between.

Time flies when you’re having fun and this spring was no exception, and soon it was the last weekend before returning back to Sweden. This big finale of my time in Ireland also happened to collide with the Irish Orienteering Championship in Donegal. It seemed like Ireland wanted to give me a perfect goodbye and the weather was great, lots of people to talk to and discuss orienteering with and a fun night with quiz organized by the junior squad in between competitions.

The three individual races that I participated in was all so much fun. The middle and long was so different from other competitions I’ve done since it was only open mountain and the maps were great. Especially the long distance was something really extraordinary for me with a map that really should be on a “orienteering bucket-list”. Despite one smaller mistake to the first control (possibly I was too excited over the terrain) I was so happy throughout the course. I felt alone on the mountain for most of the time but occasionally I looked up and saw a colorful shirt passing over the hills in front of me. An impressive amount of detail along with open sight pushed me to keep my vision held high and to make things simple by sorting out the distinct features to get the flow and being able to keep the pace up. The climb was tough but the variety in shorter and longer legs made me keep the positivity and keep pushing, it was one of those days when I just didn’t want the course to be over.

During my years of orienteering, I’ve had the possibility to compete in various places of the world, and with that I’ve found favourites when it comes to terrains and maps, and  Tawnawully goes straight in to my top 5 orienteering experiences, alongside maps from northern Norway, Iceland and New Zealand.

Looking back to when I arrived in Dublin in January, I didn’t know what to expect of Ireland in orienteering aspects, but I’ve been impressed by the diversity of the terrain and the maps. Every week I had the possibility to learn more about Irish orienteering. I gained close acquaintance with the dark green areas and the thorn bushes (learning by doing was the recipe here and I’ve learned the hard way that it’s best to avoid these). I experienced the, incredible, possibility of running night orienteering without reflectors and step by step I learned the way to best face the challenges that Irish orienteering provides. And most importantly, I’ve learned how kind and helpful the orienteers in Ireland are and I’ve felt so incredibly welcome at every event I’ve been to!

It’s a sad moment to return home but it is with a memory filled with fun stories and experiences connected to orienteering and I hope that I will get back to Ireland soon to collect more cool maps and terrains and meet all amazing orienteers again. I remember when I was a kid and I had a badge on my orienteering bag that said “Orienteering, a way of living” and I’ve never found it to be so true as I did in Ireland. 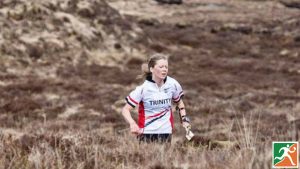 I think we can all say we look forward to seeing Josefine return, perhaps with some of her Swedish clubmates for the Irish Championship or perhaps the Shamrock Oringen.
Thankyou