Last year, in a quest to find some warm weather orienteering, CNOC ventured to CRES Island in Croatia for the annual Easter4 event. Never having taken part in a sprint-o in an olive grove before (which looked a little like the small stone walled fields on Inisheer), we had such fun that we decided that this was it – we were going to repeat the experiment in 2019. 10 CNOC members signed up for the trip. 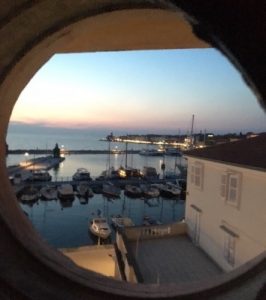 The sprint took place in the old town – a warren of narrow alleys offering shade from the 20 0 evening sun. Start and finish was in a small park by the sea, the cooling waters attracted in some of CNOC’s hardier ‘younger’ members. 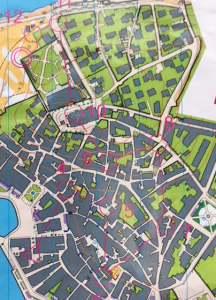 Days 2 and 3 brought us to Hrusica and Podgrad for Middle and Long Distance events- on some of Slovenia’s Karst limestone area near its Southern border with Croatia.  The maps here were as intricate as I’ve ever seen, apart maybe from WOC in France in 2011. The landscape was forested with almost no undergrowth. Depressions were the dominant feature with lots of rock underfoot in parts of the map. Woe betide anyone who went astray on this ground – almost impossible to distinguish one depression from another as I found out to my cost! 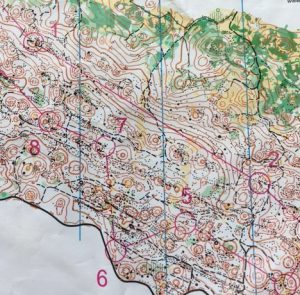 Some of the depressions here were enormous, but in general the running was faster with more open areas. 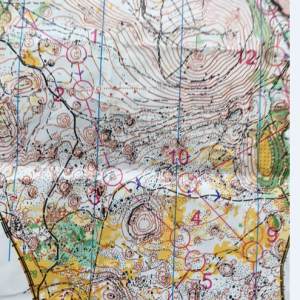 All 4 days were beautifully sunny with temperatures averaging 190.  There were 455 competitiors, so traffic was light, without any queues into or out of the events. The maps were of superb quality and entry fees were a modest €50 for 4 days! The organisers were very pleasant and offered change of start times if needed, without any fuss. All in all, a fantastic event – we added a few extra days to allow us to relax in our beautiful surroundings and even squeezed in a quick visit to Venice.

Have you taken a trip to an orienteering event abroad and would like to share your experience?