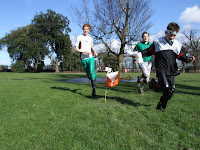 This is the first attempt at introducing TIO in electronic form since the printed version became rarer and rarer. Normally at this time of year there is a preview of the major events for the coming year and I hope to do that in the next few days: CompassSport has just dropped through the letterbox with its version and 2008 looks very promising for international multi-day events.

We’ve just had the traditional Christmas fun events so it’s back to the more serious stuff in January, though Score Event aficionados might be interested in the Northern Ireland Score Championships at Gortin Glen, Omagh, on 23rd February. The highlights of the Irish fixtures list include the Leinster Championships at Fair Mountain, Co. Wicklow, on 6th April, the Irish Championships on Bere Island, Co. Cork, on May 3-4-5, and the Inishbofin 3-day on May 31-June 2.

Those of you with Juniors should note the planned training weekend in West Cork on February 15-16-17th, that’s the end of the mid-term break. Check the details with Ruth Lynam or Greg McCann. The weekend includes a Munster League competition at Tír na Spideoige, near Ballingeary on the Sunday.

Leinster fans of night orienteering will be glad to hear of another Dublin by Night series starting on Tuesday night, January 15th, at Belfield. Five events are planned, finishing on 16th February with the Phoenix Park.

There are moves to have a mountain bike orienteering series on Saturdays in the early summer but details are sketchy as yet. In any case the NIOA MTBO Championships are at Craigavon on 31st May, if you’re not on Inishbofin.

Congratulationa to mark Stephens, Harry Millar and Jack Millar of LVO on winning their class at the British Schools O-Championships in Dorset in November. The three, representing Down High School at Downpatrick, had 5 points to spare over closest rivals Ulverston in the Lake District. LVO W14 Aine McCann also won her class in the individual competition, adding this to her current Irish and British W14 titles. Aine was one of three LVO Juniors (Katarina and Andrea Stefkova being the others) who made up the winning Women’s team at the Irish Relay Championships at the JFK Arboretum in Co. Wexford in October.

Happy News from Violet and Steven Linton
On behalf of Violet and Steven Linton, LVO are very pleased to announce the birth of their second daughter. Ruby Linton was born on the 22nd of December, showing great consideration in allowing her mum home for Christmas. Ruby weighed in at 7 lbs. and Rebecca thinks that it is the best Christmas present ever. LVO wish the whole family all the best for 2008.

Remember, for the latest information, go to https://www.orienteering.ie/