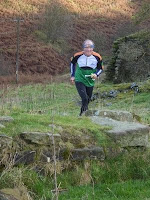 Fine runs by Ruth Lynam (2nd W55), Ann Savage (5th W50), Bridget Lawlor (6th W35) and Brian Corbett (6th M45) weren’t enough to save Ireland from the wooden spoon at last weekend’s Veteran Home International in Derbyshire, hosted by Derwent Valley Orienteers (DVO).
The strength in depth of the English and Scottish showed, with both countries clear of the Irish and Welsh in both Saturday’s relay and Sunday’s individual races.
The competition, for age classes M and W35 to 60, rotates between the four participant countries and this year was England’s turn. The relay at Longshaw, near Bakewell, was run on the side of a steep valley covered with largely deciduous forest with open heath on the flatter area above. The relay team composition must be two men and two women and their age-related handicaps must add up to 18, so there are complications in forming teams. An outstanding run by a Welsh team saw them take 32 points as winners in 108.07, with the following six Scottish and English teams finishing in less than 6 minutes. The best Irish time was 149.58, finishing in 19th place. After the relays the scores were England 98, Scotland 82, Wales 72, Ireland 20.
Sunday’s Individual at Eyam Moor was on a largely open area, part of which was covered in high heather with vague features, and finished in a complex open area with large knolls and interesting contour detail. The event was combined with a regional event which attracted some hundreds of runners. Several good individual performances were not enough to salvage the Irish team, however, and the score in the individual race was England 144, Scotland 124, Wales 98, Ireland 56.
Luckily the weather was good for running on Sunday – cool, breezy and dry, and on Saturday most runners got around dry, though later starters did get caught in heavy showers.
The overall result was England 240, Scotland 208, Wales 170, Ireland 76.
The teams stayed in the splended Hartington Hall Youth Hostel, a 17th Century manor house with its own bar and restaurant (sadly, closed by the time some of the Irish arrived on Friday evening).
It seems to be an unwritten rule of the VHI that the events are on exposed open terrain in November and that the relays, in particular, are staged in a bone-chillingly cold location! The Juniors (September) and Seniors (October) escape the worst. There was some discussion on the choice of date for future years (next year’s event in Wales is in October) and on the inclusion of the M/W65 classes at the expense of the M/W35’s, but more details of these changes will be available before next year’s event.
Thanks to Tish McCann, who didn’t get a run at all, for managing the team.
The question remains, though – what do we need to do to improve? We don’t have the same level of competition as in England or Scotland; Welsh orienteers, though few in number, do have ready access to top class terrain and top class competition. if you compare an age class here (say M55) with events in the UK, the numbers are quite different. Take the Munster Championships, for example: MOC 2009 had eight M55’s. Last Sunday’s DVO event had twenty three M55 Longs, including eight from the VHI compatition and a further eleven M55 Short.

What do we need to do to beat the Welsh? We can do it at Rugby, why not at orienteering?