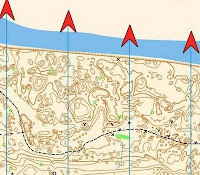 Connacht Championships
November ended with the Connacht Championships on the excellent Finner sand dunes between Ballyshannon and Bundoran in Co. Donegal on Sunday 30th An outstanding run by CorkO’s Brian Corbett saw him win the M21 Long race by 35 seconds from CNOC’s Colm Hill, in the closest finish of the day, while a surprise result in W21 Long saw Maeve O’Grady (DFO) take the scalps of internationals Ciara Largey (FermO) and Ruth Lynam (CNOC).
A training weekend for the top Juniors meant that they were all there, with Niamh Corbett emulating her father’s win in W16 and also in running up a class (or in Brian’s case, three classes!).
Despite the recent severe weather, running conditions on the day were excellent, although running a Championship event in November on open terrain is a risky business – however, at sea level the risks of bad weather are probably minimised. Frank Ryan’s courses used more of the complex dune network than some previous events, as he chose to start closer to the most interesting south western section.
Unusually for a sand dune area, Finner has 5 metre contours so that only the bigger features were shown on Padraig Higgins’s revised map. Perhaps for the next revision, a larger scale might be clearer, with either 2.5 or 5 metre contours. It is such a good area and the map should do it full justice.
Once again, it is impressive that the small band of Connacht orienteers can run events like this.
And before you all write in, I know that Donegal is in Ulster!
No routegadget of the event is available as yet, but the results are here. 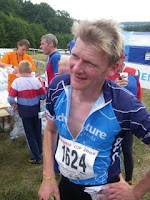 Controlling and Planning Conference
Top British mapper and BOF Major Event Advisor Dave Peel was the main speaker at last Saturday’s Controlling and Planning Conference at the Heritage Hotel, Killenard, Co. Laois. Almost twenty people from clubs across the country attended the event, hosted by IOA Controller of Technical Standards Harold White.
The group discussed the current and proposed standards for colour events, both in terms of tecnnical and physical difficulty, and also looked at the requirements of long, middle distance and sprint orienteering, and at planning for Championships.
The presentations are available on the IOA web site here. (scroll down the page till you find them).
Did you know, for example, that colour events should be planned so that most finishers on any course finish within a specified time band (75 to 120 minites for the brown, 55 to 90 for the Green course and so on) and that there are rules laid down about what kind of legs and control sites are appropriate for each couse? To be honest, maybe not all the planners and controllers know this either, judging by the times of finishers at a range of colour events surveyed by Harold for 2009. The percentage of finishers in the correct time band ranged from 0 to 100%, with events as a whole rangeing from 47.8% to 73.3% finishing on time. Admittedly, the event organisers have no control over who comes on the day, or over what course thay do, and they don’t contriol the weather which can affect results, but the planning guidelines should be familiar to both competitors and officials alike.
Improving the standard and the consistency of courses is necessary so that orienteers can progress from one level to the next, or find a level that they are happy with, rather than going orienteering week after week and never knowing what to expect.
Unfortunately I missed the second half of the day, but we may get a report from one of the participants…

Orienteering Today folds
Orienteering Today, a glossy orienteering magazine produced in Norway, has ceased publication and is looking for a new owner. The production standards of the magazine were outstanding, with photos and maps from around the world. O-Today took over from orienteering World (previously published in the Czech Republic).
This leaves CompassSport (this year celebrating its 30th anniversary) as the orienteering magazine of choice. Editor Nick Barrable, currently based in Sweden, works virtually full time on the magazine, which is published in Britain and is available by subscription. The December issue carries details of major events around the world in 2010 – vital information if you are planning an orienteering trip abroad. Subscription and other details here.

Entries to the Jan Kjellstrom orienteering festival (the “JK”) have opened. The event is one of the biggest in Britain and regularly attracts more than 3000 runners from across Europe. This year’s competition is in Devon in the south west, over the Easter weekend. The sprint event on Good Friday (2nd April) is at Bicton Agricultural College near Exeter; Saturday’s race is at Cookworthy forest near Okehampton, and the Sunday’s individual and Monday’s Relays are on the open sand dunes of Braunton Burrows near Barnstaple. And remember … the 2011 JK is in Northern Ireland!

Extract from the 1989 JK programme:
Jan Kjellström was killed in a road accident in January 1967. Much of what the pioneers of orienteering in this country knew was taught to them by Jan, and the Jan Kjellström international competition was instituted in his memory that year, by the English Orienteering Association.
Jan was the son of Alvar Kjellström, one of three top Swedish orienteers in the 1930s. Alvar, with his brother Björn, ran Silva Compasses. British orienteers first met Jan in France in 1964. He visited this country in the summer of 1965 and 1966, never sparing his energy and enthusiasm in helping those who were trying to get orienteering established as a sport, teaching them both competitive skills and better methods of organisation. He also acted as mentor to the British team abroad.
Jan was only a 3rd team member of his club Rotebro IS. Yet his skill and speed in the forest gave British orienteers a vision of what they themselves could attain.
The early JK weekends were not quite so complicated to stage as the one you are about to enjoy. The area for the first one was decided one week beforehand, after another area had been rejected on the previous Wednesday. For the first two years there was no Relay as such, the Jan Kjellström Trophy being given for a team competition based on the senior men’s race. In 1969 the sport had changed somewhat. There were now four individual courses instead of just one each for men and women, and redrawn maps had appeared. Three colours were used, the scale was 1:25,000, and forest rides were omitted with the intention of increasing route choice. A proper relay was organised but it was remarkable that it took place. The intended forest (Slaley in Northumberland) was snow-bound and the event was re-planned overnight in another forest, on OS 1:25,000 maps which had been hurriedly driven up from Southampton.
The sport is different now. But the enthusiasm of orienteers has not changed, and the JK weekend is now the social occasion of the year for British orienteers.
It is a fitting memorial to Jan that his trophy is given in a relay competition, in which club spirit plays so great a part and the ordinary orienteer has a chance to shine.
Arthur Vince