Orienteering and computers are inextricably linked, from mapping, through course planning, to results processing. A recent IOA seminar dealt with many facets of the issue …

Marcus Geoghegan of the Irish Orienteering Association organised a Computers in Orienteering workshop in the Heritage Hotel near Killenard, County Laois. The outcome of the tightly packed, regimentally controlled schedule was a recognition that our knowledge sharing must continue and improve, as well as a pile of suggestions about how we can get the most out of the technology that we use. 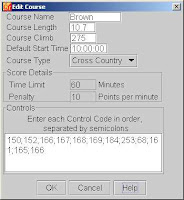 Martin Flynn started the day off with a discussion about his program, Ór, presenting and demonstrating the best way to use the program and leading a practical session that stressed:

• the keyboard shortcuts and reading the help menu

• the competitor statistics that are available during and after the event

• how to handle SI card reusability, a key feature of the latest version of Ór

• how to upload results and how competitor information (name, club etc) is harvested into the online competitor database

• how an orienteer can change his own club and class details

Future plans for Ór might include the handling of relays & multi-day events and the reading of start controls, but Martin needs a lot of feedback and suggestions about what features we would like to see.

It was stressed that organisers must import a blank map JPEG and the courses file (from OCAD or PurplePen) into Ór before the event so that a RouteGadget is automatically produced when the results are published. Competitors can then draw in their route in Routegadget using a mouse. Those with a GPS watch can also upload their GPS track and they can all replay their routes against each other

Clubs were asked never post results or start-lists on the Orienteering eGroup and to use links to the results pages and club websites instead.

A short discussion about orienteering.ie followed, emphasising the need for all orienteers and clubs to send in fresh information to the TIO blog and eGroup. Martin demonstrated how simple it was for a club to get a personalised club-specific fixture list and club-specific results for inclusion in their club website via an RSS feed

Fachtna Healy then discussed how CorkO handle online event entries and PayPal on the Shamrock O Ringen website. He demonstrated how a well-built system gives extremely useful up-to-the-minute to information to organisers and planners, such as the entries by class and course, and he showed how the CorkO system automatically produces competitor files that can be loaded into Ór. The workshop unanimously agreed that we need to build on this work to create an Irish Orienteering online event entry system that is available to all clubs.

Fachtna then led an interesting discussion about how to Laser print (as opposed to inkjet) maps from the boot of a car.

Brian Power discussed Sportident hardware and the responsibility of the event controller to ensure that everything is synchronised. SI TimeMaster and checking the time via the LEDs on the rear of the units was demonstrated. Unusual occurrences, such as a competitor punching the finish station twice, were highlighted. The IOA SportIdent northern and southern inventories were listed.

Aine Joyce then electrified the audience with a presentation on how to get reliable 220v AC power at an event, where we discussed the advantages and disadvantages of car batteries, leisure batteries, cigarette lighters, generators, battery powered printers and 9-cell laptop batteries in a lively debate.

Stuart Scott demonstrated IOLeague both from a competitor’s and a league organiser’s point of view. IOLeague is based on a fair scoring system that uses standard deviations and can be used not just for large leagues like the Munster and Leinster, but also for club and junior leagues. The forum agreed that there is great scope for expanding IOLeague, not least for inter-club leagues and to make it the basis of a National Ranking system.

Pat Healy, the OCAD maestro who can sign his name using OCAD Bezier curves, gave a well researched and detailed demonstration of how to use OCAD’s course setting features. He stressed the need to get the scale and map print areas correct and showed how the control descriptions can be overlaid on the map in a variety of sophisticated ways. It was universally agreed that we need to get Pat to run some OCAD master-classes for Irish Orienteering – watch this space in 2009.

The choice between OCAD and PurplePen is depends on personal preference but one suggestion was to use OCAD for sophisticated events (but be aware that OCAD 9 Demo only supports 5 courses) and use Purple Pen for standard events e.g. interfirm league event.

Marcus Geoghegan then discussed other SportIdent software including Autodownload, OE2003, SIME, Helga, Orienteering Organiser, SiCard Reader and Ór’s ability to auto-send punch information to an online database. In choosing any event software you need to make sure to that the software understands our colour-coded concept where the same class can be on many courses in the same event, something that is unusual internationally.

Marcus then briefly demonstrated two performance analysis programs, QuickRoute and WinSplits Pro. Quickroute is used with GPS tracks to extract a lot of useful information about individual legs and is used by the Swedish international squads as a performance analysis tool. Winsplits Pro, the sister product to Winsplits Online, has literally hundreds of features; Marcus showed how it can be used to replay a race, analyse your performance compared to “superman”, how to see pack formation, the percentage advantage gained from following, and how to analyse your time-loss.

Finn Van Geldern had been scheduled to discuss orienteering video publication but was unfortunately unable to be there.

A huge amount of information was shared at the event and there was agreement on the need to keep up the momentum and develop some of the systems that were discussed, and to make the forum an annual event.

We are indebted to the following presenters without whom this event would not have happened: Fachtna Healy; Brian Power; Aine Joyce; Stuart Scott; Tony Doolin; Pat Healy; Gerard Butler and Marcus Geoghegan; with thanks to Ailbhe Creedon and Fiona O’Riordan for the record of the day’s proceedings and to Pat Healy for his encouragement and support, and to Harold White for the original suggestion to run the workshop. But above all we would like to thank Martin Flynn for his immense contribution to the event and for the hours of preparation that he put into it. All presenters received a complimentary 4GB memory stick and Martin was also given a €75 outdoor sports gift voucher as a small token of our appreciation.