In a remarkable double, CNOC brother and sister Shea and Niamh O’Boyle took both the men’s and ladies titles at last weekend’s Leinster Championships at Carlingford. On probably the most challenging/daunting/intimidating orienteering area in Leinster, Niamh had a comfortable 12 minutes to spare over second place Rosalind Hussey (Fermanagh/DUO) with CNOC clubmate Ruth Lynam third.
Due to a glitch in the results system the full results are not to hand at present, but watch this space for an update.

A number of runners had travelled the day before to Slievenagore in the Mournes to run the NI Series race there, followed by Igor Stefko’s micro-O in Kilbroney, across the Lough from Carlingford. No doubt this was a good preparation for the rigours of Slieve Foye, where there are few linear features, lots of contours, crags and marshes, but very runnable underfoot – picture West Cork at an angle of 45 degrees. Trina Cleary, who always relishes the opportunity of planning here, kept most of the courses in the north-eastern part of the area, with long legs across the hillside interspersed with shorter legs up and down, posing a range of navigational problems which caused many a rueful shake of the head at the finish line. “If only, if only!”.
Conditions were perfect for running on the day, though a bit on the chilly side for the officials standing around, in marked contrast to the first event on the area, the May 1993 Irish Championships, when the upper parts of the mountain were covered in thigh-deep snow.
The long walk from the Foy Centre in carlingford to the start/finish area was a good warm-up/down and the centre provided changing, parking, toilets and food. It is probably true to say that the citizens of Carlingford weren’t even aware of the dramas unfolding on the steep slopes overlooking the medieval village, but the orienteers certainly went home knowing that they had had a good day out.
Results are available here, routegadget here, photographs here. (There is a problem with the results and routegadget at the moment – JMcC 15th May 2010)
Incidentally, I have been trying to remember if a brother and sister ever won the Leinster Championships before: possibly Justin and Carey May back in the early ’80’s? Maybe someone will help me out here and let me know!

Did you know that Dublin is the European Capitol of Sport for 2010? Sports organisations were invited to nominate people as ambassadors of sport for the year and our own Ruth Lynam was nominated as an Ambassador for Sport for Orienteering.. Since being made City of Sport, Dublin City Council have reportedly tried to close down three swimming pools in the city because of lack of funds, though they have received a stay of execution until after the summer.
Ruth is pictured above with the Lord Mayor of Dublin, Councillor Emer Costello, and boxer Bernard Dunne. The honour does not, however, entitle Ruth to park on double yellow lines, graze her cattle on St. Stephen’s Green or enjoy the freedom of Guinesses brewery.

A great weekend is planned by LVO at Tollymore near Newcastle, Co. Down, for 19th/20th June, centred around the Northern Ireland Championships. This event has traditionally been in September but is being brought forward this year.
In addition to the Championships on the Saturday, there will be a barbecue followed by a night event on the Saturday night and training and fun events on the Sunday, all at Tollymore and based on the idea of people coming and camping for the weekend. Details of the event and online entry are here. Cheapest entries before 14th June.
The 19th is the night of the Jukola overnight relay in Finland, so maybe there will be a Jukola atmosphere in Tollymore!

The Irish Junior Squad is coming on in leaps and bounds – gone are the days when we started reading the results at the bottom to see where the Irish came (this applies to the Seniors too, by the way!). This summer the teams are heading to the Junior World Championships in Denmark; the European Youth Championships in Spain, and the squad are going on a tour to the World Championships in trondheim, Norway, in August.

The Irish team at JWOC 2010 in Denmark will be: Niall Ewen, Sean Knight, Conor Short.
The JWOC website is here. Irish interest in JWOC isn’t confined to the competitors, however: Ronan and Julie Cleary are the IOF Event Advisors.

Donegal 3-Day Entries Still Open
Entry for the 3-Day competition around Lough Eske near Donegal town on the June Bank Holiday (June 5-6-7) weekend is still open.  The maps were used for the 2009 Irish Championships and the terrain is complex open mountsin with fine views and interesting courses. In April of last year I heard my first cuckoo there, an event often associated with the Irish Championships, but so far I haven’t heard one this year at all – maybe the late spring and the lack of trees at IOC combined to thwart the cuckoo-watchers?
Entry is open until May 21st. Online entry here. Details of the event from Western Eagles OC here.

This very personal report was adapted slightly (for a family audience) from Colm Hill’s blog:.)

After last Wednesday’s attempted to beast it off at the start and drop the entire field at the Prince William’s Seat hill race I decided to adopt a different tactic for the Leinster Orienteering Championships being held on the epic mountain of Carlingford. The mountain and I have a short and painful history – Autumn Series Race, DNF, Irish Middle Champs; 3nd, Irish Long Champs; 2nd, Irish Relay; 2nd, Spring Cup Race; Injury.

So with this I returned hoping to adjust many a wrong and many a mistake that have hampered my orienteering success on the mountain. It was an ideal place to try to defend my Leinster Senior Orienteering title.

Starting 12 mins after Seamus (O’Boyle, the eventual winner – Ed) , my tactic was simple: take the first control handy, then get stuck in and start eating the gap, second by second. After spiking the first control  (2nd fastest, 0:19 down on Ger Butler) I decided to open the gas.

I climbed hard and then this happened…. not sure what happened 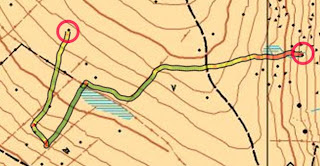 After giving Shea a good head start, I got into a flow and began to orienteer really well. Spiked 3 and 4 and continued up the hill to 5. Excuted the leg perfectly but I didn’t read my control descptions and with the control buried close to the cliff, I didn’t see it and dropped another minute running around in circles.

Following 8, I began to orienteer better, I was running well and keeping my head clear. I battled away and as I punched number 14 I was one second down on Shea and 2:15 down on the current leader, Ger. Then I pulled out a series of orienteering skills that are the blessing of every other orienteer in the country and the reason why I don’t run sub 5min/k’s on every map.

I’m not even sure how to describe the mistake. I was clear in the head, I was running strong, I knew I had the race in the bag and perhaps thats why it all went to hell… These were the easy controls to clock up the extra distance and bring us home.

16 was a matter of running to below the big cliffs below the 12th control. These cliffs were BIG. Impossible to miss….. So I took of from number 15 and was picking up the pace when I see a control a little up the slope, for some reason I decided to check the code on it, it reads 154 (number 17 was 54). My thought process was this..

As I hit 16, I turned and descended. Reading my map (first mistake). I was panicking. I was freaking out completely after dropping 5mins. I dropped down the contours. I couldn’t see the control. I panicked more…. I attempted to keep calm but I was failing…. Hugh walks past again. I felt like crying…. FAIL. 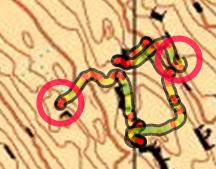 After this, I just ran the rest of the controls. I ran them hard but my heart wasn’t in it. It kinda showed by walking up the hill to the last control.
It wasn’t a good day at the office.

I reckon it was a mixture of being off colour for most of the week and the added grief of my thesis and other project work due….

Ya win some, ya lose some. I already had it so I didn’t want it half as much as I did last year.
After the post-mortem – I’ll be all guns blazing next year. You don’t appreciate something until you no longer have it.

The six inches in front of your face
You have to want it.
(Colm Hill)