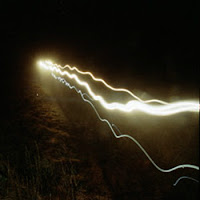 Marcus Geoghegan is nothing if not a perfectionist, so when 60 minutes had elapsed with no sign of the front runner, Ger Butler, on the 4 km Long course, doubts started to creep in.
“Have I overdone it..some of it is tricky..there’s some rough bits…” he starts muttering.

Standing under an umbrella by the car with a light implanted in his head it was dark and wet. His concern wasn’t helped by the headlamp walking by the car reading a map … this isn’t a normal route choice “…WHERE did you get this manky piece of forest…” spits the headlamp and grumbles off.

It’s a strange sight: 20 or so cars thrown up on the side of the road by the forest, it’s dark, wet and misty… no street lights … frightening for townies like us. Apparently a local had pulled up and roared at the sight of the cars …”What’s going on here lads?”. Probably expecting some normal pursuit like badger baiting, he turned on his heels quickly when invited to take part in a spot of night orienteering.

The young Shorts, Ruarí and Conor, clatter up in their spikes to the car, grab control descriptions and go. Tall and light, they’re seasoned O-soldiers at this stage, a couple of kilometres on a wet night in February is nothing to them, a mere skirmish.

Finally a finisher… Ger Butler comes in. Shakes his head at the time and the missed controls, the one on the hide lost him time… it’s a story that will be repeated. Marcus’s mood improves immensely – going from zero to one finisher is a big step.
After that finishers start rolling in. Despite the numerous tracks and relatively open forest, the mist makes picking up controls in the forest tricky. Stories abound of the one that got away.

Ruarí Short wins Long in front of Philip Brennan with Mary O’Connell snatching third ahead of Martin Flynn and Conor Short. Andrew O’Mullane leads in a small field on the short ahead of a brace of Redmonds and Patrick O’Brien. Old names on young shoulders.

Finally I’m sent of on my allotted task with Gavan and Tony, control collecting, the pinnacle of orienteering tasks. My choice of an LED bike light as I was going out the door proves unwise … at 10:20 pm I can’t find the last control. Mobile phone calls in Marcus to sweep up the one in the hide.
Back on the road everyone is gone … as though it never happened.

It’s a strange one, night orienteering. You can’t get it on Playstation or by pressing the red button. You have to go out in the black dark. There’s one left in the Dublin series … worth a try.

(Peter was at the AJAX night event at Slade, near Saggart, Co. Dublin, last Tuesday night. The final Dublin By Night event for the season is Phoenix Park on Saturday February 16th. Courses of about 9 and 5 km …, starting between the US Embassy and the Ordnance Survey. Turn left 500 m NW of the Phoenix Monument, 6.30-7.30 pm. Adults only!).
But wasn’t Black Night by Deep Purple, not Slade?