Anton Hallor, together with Darren Burke and their counterparts in Northern Ireland brought together orienteers from across the country for the Belfast Sprint Camp.

Here Josh O’Sullivan Hourihan (Cork Orienteering Club), of late frequently found running with the deer in the Phoenix Park, tells us of his take on the training camp.

“Give me 6 hours to chop down a tree, and I will spend 4 hours sharpening the axe” – Abraham Lincoln

At a time of year when Finnish, Swedish, Czech and Danish athletes are on training camps in Portugal, Spain and Southern France a group of Irish orienteers, plus a Swede and a Scot, headed to Belfast for a Sprint Camp accompanied by Storm Dennis. We always like to do things a little differently here!

My physical training has been going to plan so from my point of view this camp was a chance to sharpen up, to put some of the theory into practice and to test out some race tactics, especially for the Knockout Sprint. I was lucky enough to be able to get some pointers/advice from Øystein Kvaal Østerbø (Norwegian National Team), Olli Ojanaho (Finnish National Team) and Otto Simosas (Finnish National Team) about how best to attack this new format from their experiences.

We kicked off the camp on Friday night with head-to-head racing on 4 short courses (1.1km – 1.2km) around the Botanic Gardens to simulate a Sprint Relay style race. A really fun way to start the weekend off and get straight into some maps. Head-to-head racing is probably something we don’t really do enough of.

Saturday morning was a parkrun with a twist. Anton had designed a puzzle for us to solve while running at speed. Over 400 turned up making this the biggest parkrun I’ve run in. The puzzle was a mixture of questions, a maze, finding logos and animals, doing maths and then solving a riddle at the end to reach the “finish”. During the run I was asked by fellow parkrunners if it was a course map so I didn’t get lost or if I was doing my homework! I spent the first lap glancing at the puzzle and piecing the steps. I was able to get a gap at the front going in to the second lap, which was the plan beforehand. It gave me some clear air and thinking time to focus on the puzzle without risking losing my parkrun streak!

( Josh maintained his streak finishing third and appearing once again on the Fast Running top ten park runners with a time of 16.28.- Josh was too modest to include this fact himself!)

The parkrun was to simulate the Knockout Sprint Quali race, and a Quali race in general as there is one for the “classic” sprint format too. Since I have embraced my nerd side I can say that, based on some number crunching, we will need to navigate cleanly and keep a footspeed of <3:46min/km (for men) and <4:10min/km (for women) to make the quarter final of the KO Sprint. In order to progress from the Sprint Quali the men will have to average <3:34min/km and the women <4:03min/km. These paces are only theoretical values based on bulletin information and results from previous years but I personally think it is a useful thing to be aware of when training. My mindset is that if you can’t run at these paces how realistic is it to chase a KO Sprint QF or a Sprint Final?!

After some refuelling and a short nap (the glamorous side of training camps!) it was back out for Knockout Sprint training for which Anton promised us sunshine. This is the newest WOC format and consists of a qualification race in the morning (which parkrun was to simulate), a quarter final, semi-final & final. The race winning times are ~10min, ~8min, ~7min, ~9min. We ran 3 mass-start “races” with the runner’s choice forking system and I was able to test out my 3 pre-planned tactics on how to get the most out of the 20 seconds you are given to choose the fastest forking. It was really good fun racing head-to-head again and I left the training a bit wiser as to how to approach this format with one of my tactics not working as well as the other two. That isn’t to say it is a bad tactic, just maybe needs more tweaking going forward.

Sunday was back to the “classic” sprint with a qualification race in the morning and a final in the afternoon. Both held in Belfast city, a map which is very very similar to that of Kolding, the area for the WOC Sprint in Denmark this year.

It was fast running with plenty of routechoice on almost all legs especially the longer legs which proved to be decisive. This is exactly how I expect WOC to be having read the bulletin, from my own experiences of racing the Fynsk Cup in Odense last year and also having considered the strengths of the athletes on the Danish Team. In the afternoon we ran in roughly reverse start order as it would be at WOC. The city was much busier now so it was hard to focus on the map while not getting run over/running over anything or anyone in the city. We managed to get in some quick after training analysis before the rain rolled back in…….again……

From my point of view, and I’m sure I speak for everyone in attendance, it was a fantastic high quality weekend camp that we are all leaving having learned some new things moving forward in our WOC preparations. Personally I still have a few more Cross country races and some more technical training to chomp on before the first WOC Selection race at the Jan Kjellstrom Festival 2020 in the middle of April.

Thanks Anton for making this happen and to Darren and LVO for organising permissions and use of the maps for the weekend.

I’ve always enjoyed sprint orienteering the most, so having an entire weekend dedicated to sprint orienteering in Belfast was very exciting. Unfortunately, I am currently injured so I was only able to participate in a few of the training sessions that Anton had planned. For the rest of the races Clodagh (who is also sadly injured) and myself studied the maps, comparing our route choices, whilst the others raced.

It was very enjoyable to watch everyone sprinting around the place and cheering them on (admittedly not as enjoyable when it started raining.) The maps were extremely intricate and challenging with many possiblities of route choice. It was an extremely well planned and well executed training that explored many areas of Belfast city. All the athletes found it extremely beneficial.

From a social element, it was an extremely fun filled weekend. Despite the awful weather, everyone was in high spirits (possibly due to the delicious Boojum that fuelled us for the weekend) and there was a great sense of community within the team. It was lovely to see everyone and was, overall, a great weekend. I’m very much looking forward to the next training camp where, fingers crossed, I might actually be able to fully participate in the training.

Thank you Anton for a wonderful training weekend! 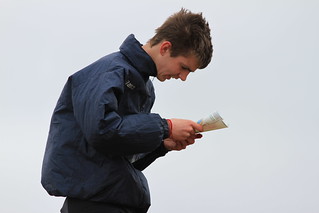