On the 2nd January, I received an email from Nigel explaining that he was in intensive care due to a Covid 19 infection. He said that the answers to my questions regarding a new club logo might take a while. Little did I know that we would not communicate again.

Nigel was the quintessential family man. He grew up in an environment which included orienteering from an early age. Parents, Alan and Sue and Andrew, his older brother started to get involved in the Waterford orienteering club in the mid 80’s. Pat O’Connor (Wato) remembers well those days when all the planning meetings took place at the Pim house. In more recent times, Nigel as Chairperson of Wato hosted many a meeting in his business premises in Tramore and his home, especially when the club organized IOC 2016.

All the Pim siblings tried their hand at the sport in their youth at Tiglin Adventure centre. As Nigel’s own family grew older, he encouraged and supported Jordan and Robert to participate in orienteering. Hugh Dobbs (Wato) recalls when Nigel turned up for an event at the Minaun wood with Robert and a buggy. The problem was that Hugh had not planned for such a situation. Nigel made it round the course over tree stumps and through the mud, buggy and all in his usual determined fashion. More recently, as a result of a fall in the mountains, a very determined Nigel was to be seen completing courses on his crutches.

Nigel was a valuable club member. He was a techie which was big asset in the Sportident/Or world. He was often to be seen on the computer at Download and on the start at events. I personally owe him a great deal for taking over organisation of the 2017 Irish schools at Castlecomer at the last minute. It was no bother to him and everything went smoothly. Angela remembers how he gave her a hug and said everything would be ok. He also contributed a great deal to the successful hosting of the IOC 2016 in the Comeraghs. He was even to be seen helping out in the Lake District at the JK 2015 in miserable conditions when he was injured and couldn’t race.

Gradually the family ventured outside Ireland,  first the annual  JK in the UK. Then to places such a Rome and night O in Disneyland. He was particularly keen on urban orienteering. He was partly responsible for my own love of urban orienteering. When travelling, he was always looking for the nicest food and the best place to eat after detailed and careful research.

Mike Long of Ajax writes: It is obviously with a heavy heart I write this, and our thoughts are with Jeni, Robert, Jordan, Andrew, Alan and all the family.

The Long family got to know the Pims through orienteering, Robert and Ruairí are the same age and are good friends. Ruairí has strong memories of the many times he visited and stayed with the Pims and of the great hospitality he received.

It is hard for me to disconnect my memories of Nigel from the rest of the family. It was always an inspiring strong team effort involving Jeni and the whole Pim family, for example when we worked together organising junior training camps.

When I think about Nigel the first thing that comes to my mind is his generosity. His generosity in giving one of his kidney’s to Alan was of course magnificent but I remember lots of other instances where Nigel was not worried about himself and was concerned only with doing his best to support the rest of us. JWOC 2016 in Switzerland was a classic example. We had a strong group of juniors that year and we were keen to take as big a team as possible. However, the budget was tight! We (I?) booked a cheap (dodgy?) hostel. On Nigel and Jeni’s initiative, the Pims took a holiday house nearby. Nigel then drove from Waterford to eastern Switzerland with a carload of food. Subsequently they travelled to adjacent and cheaper Austria every day to top up our supplies. The standard of catering and care for the athletes was outstanding. I have particularly strong memories of Nigel’s bircher muesli. This involved him preparing it late at night and getting up early the following morning to have it ready for the athletes. Not surprisingly the whole team morale was great and we had very good results that year with several IOA performance excellence awards as far as I remember.

I also have very strong memories of the fantastic (crazy?) trip we made to WOC in Finland in the summer of 2013. We drove from Trondheim in Norway to Kajaani in Finland across Sweden, around the Gulf of Bothnia and across Finland. It took more than two days. I remember the trip only being full of fun and good humour. I also discovered during that trip what a strong powerful swimmer Nigel was. I guess it was not surprising as his Dad, Alan, taught swimming for many years.

Other occasions that stick in my mind are, for example, all the fantastic effort made by the Pim family for two junior training camps we organised in the hostel in Tramore, County Waterford. I actually have forgotten the details of the orienteering but remember the meals, the fun and the companionship and being introduced, for example, by Nigel to the Waterford blaas.

I could continue but just wanted to offer these few memories as a tribute to Nigel and his family and to say what a great privilege it was to know and work with him. Mike Long

Thank you to Mike Long and all those who added their thoughts and provided pictures.

If you would like to add to Nigel’s book of condolences it can be found online here.

Jeni’s heartbreaking interview on the Late Late Show where she asked Ireland to hold strong and continue to follow government guidelines can be found here. 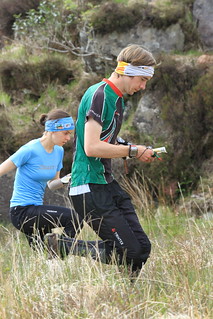