40 Years of Irish Orienteering this April 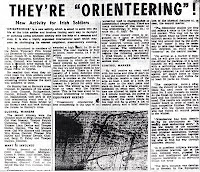 When and where exactly was Ireland’s first orienteering event held? A half page article discovered by Pat Healy in the Clonmel Nationalist newspaper dated 19 April 1969 describes in detail the newly found sport and reports on the first event organised in this country (recorded in print or otherwise) – a competition planned and run for members of the 3rd Motor Squadron (FCA) based in Clonmel, Co. Tipperary.
The newspaper reports that on Sunday April 13th 1969 at Harney’s Cross near Clonmel, 44 members of the 3rd Motor Squadron took part in the first orienteering event for FCA personnel over a 7-mile cross-country course from Boola Bridge to the Raven’s Rock and back through the forest to Harney’s Cross. (The current orienteering map of Kilsheelan covers some of the terrain used for that event.) The squadron was divided into district teams for the competition – Clonmel, Rathgormack, Carrick, Kilcash, Fethard, Lismolin and Mullinahone. Competitors ran in pairs; the three winning pairs in the various categories were Corporal Wm Harty and Trooper Wm Byme, Trooper Wm McGee and Trooper Devine, and Sergeant D Fahey and Trooper Dargan. Clonmel took the district team prize. The ‘Clerk of the Course’ was Corporal Tom Hannon, one of those whose photograph appears in the newspaper article.
Commandant William Augustine (Gus) Mulligan, commanding officer of the 3rd Motor Squadron in Clonmel, had encountered the sport while serving in Cyprus with the United Nations Peacekeeping Force. He was introduced to orienteering by a Capt N Engrist of the Swedish Battalion, and on his return in 1968 he passed on the sport to his unit in December 1968.
In a separate article published in the March 1969 edition of “An Cosantóir” – the Defence Forces in-house publication – Gus Mulligan describes orienteering as ‘excellent military training, combining practical use of the map, compass work, physical fitness and intelligence.’ He adds that ‘the fastest does not always win as one may defeat a faster runner by skilful planning’. There is ‘nothing new in orienteering, as it is practised in all armies of the world with the aid of a protractor, map and compass.’ He attributes the advent of the SILVA compass (which combined protractor and compass in one unit) as greatly simplifying and demystifying navigation.
The early maps used for military orienteering in Ireland were of scale 6-inches- to-one-mile. Since there were few photocopiers in those days, copies were produced by first tracing the main features of the map on to a foil and then reproducing the traced image using the Gestetner printing apparatus (a mainstay of every Defence Forces Orderly Room of that time).
Where does Gus Mulligan’s event fit within the currently accepted history of Irish orienteering? The re-discovered newspaper article places the Kilsheelan event as the first organised orienteering event in this country.
(Aonghus continues “The second orienteering event held here was the competition organised by Michael Lunt in Autumn 1969 in The Devil’s Glen. A following event was run in the Glen of the Downs by Paddy O’Leary”. However, Eoin Rothery’s records have the Glen of the Downs event run by Paddy O’Leary on 1st October 1969, Niall Rice’s event at Blessington on 1st November 1969, and Mike Lunt’s Devil’s Glen event on December 26th 1969 – Ed).